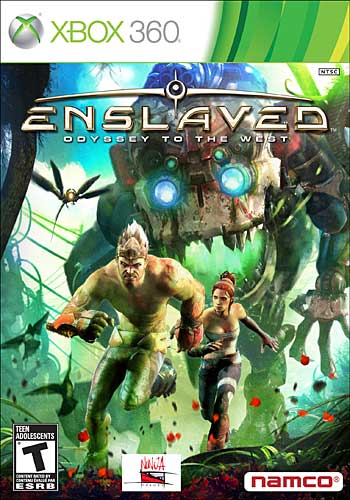 It’s tough for any new game franchise to get the attention it needs during the crowded fall/holiday season. Among games like Halo, Call of Duty, Rock Band and other top-tier video game franchises, it’s easy for a game like Enslaved: Odyssey to the West to be ignored. But the game, a third-person action-adventure, takes place 150 years from now in a post-apocalyptic America, what’s a better recipe for a game than that?

The game begins with your character, a big fella named Monkey, trapped on a slave ship controlled by robots called Mechs. A malfunction on the ship opens his slave pod where he’s able to escape. He sees a fellow slave named Trip making her way out of the ship as well and he attempts to follow her. She’s reluctant to help him, but it doesn’t matter because the ship is about to crash into New York’s Hudson River anyway. Once on the ground, Monkey wakes up to find himself wearing a slaver’s headband that is controlled by Trip. The mission? Help Trip get home and she’ll remove the headband and he can go free. If she dies, she says, so does he. There isn’t much of choice here.

Despite Monkey’s unoriginal name, he’s a battle-tested road warrior who knows martial arts and wields a staff that doubles as a cannon. His shield, health, weapons and combat strength are all upgradeable by collecting orbs that are strewn about the world. Trip, who doesn’t actually fight any of the enemies, offers assistance in the way of distractions, bait and technical aid. It’s a partnership that starts off roughly but grows into a somewhat symbiotic, if unfair, relationship.

While the combat and enemies may seem to get repetitive, and it does often, it’s the story that keeps you engaged. Each chapter in the game has a goal, either get to a plane wreckage, find a settlement or cross a dilapidated Brooklyn bridge, the game keeps you engaged enough to find out what happens when you achieve that goal. What’ll happen next? Where will you go from here? What new enemies will you run into? Will you ever see another human being?
And along with superb art, lush landscapes and great animation directed by Andy Serkis (Gollum from Lord of the Rings trilogy), this is a game that deserves to be talked about among the top-tier games coming out this holiday season.