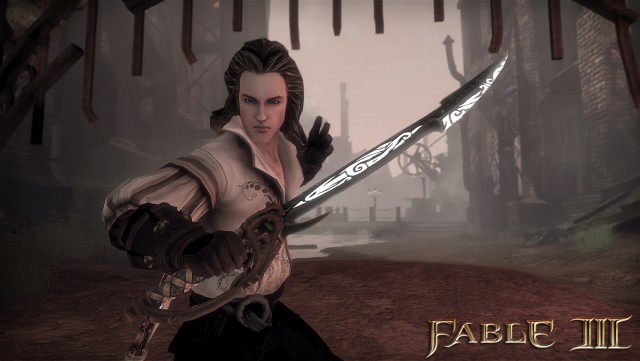 The Fable series is a fun one. Created by Peter Molyneaux and the folks at his Lionhead Studios exclusively for the Xbox 360, the stories of the games are the classic hero-type. You start off as an impoverished character just trying to survive until you’re called upon to save the world (or village or town or kingdom, etc.). The Fable games were always backed with a great story and a bunch of ways to customize and mold your character, affecting the environment around you.

In Fable III, however, things are a bit different. The foundation of the game is still intact, but there’s a new angle story-wise and new abilities. The story takes place 50 years after Fable II in the kingdom of Albion. The hero of Fable II, and ruler of Albion, left the kingdom to Logan, your character’s older brother. In the last few years however, Logan’s attitude has changed towards the kingdom and its people and he become power-hungry. An event in the beginning of the game causes a pretty huge beef between the brothers, your character escapes from the castle with a couple of friends and you begin a plot to start a revolution and overthrow Logan. You must gather all the support you can from the surrounding towns, but of course, there’s a plethora of tasks you must accomplish before the people will pledge their allegiance to your movement. Through this process, as you earn followers, you earn more abilities, weapons and treasures.

But once you overthrow Logan and become ruler, the game doesn’t end. You’re tasked with running a kingdom and all the responsibilities that come with that. Will you become a lovable ruler and take care of your people in the kingdom or will you turn into an evil dictator only looking out for yourself and your interests?

As with previous Fable games, the graphics are solid with improved animations and action sequences, new weaponry and new moves. The story is told through interactions with the different characters in the game and not a bunch of CGI cut scenes. You hardly feel as if you’ve been taken away from the game. Besides the main story, there are a plethora of side quests you can jump into to immerse yourself in the game even more, like getting married and raising a family either offline or online with other players.

All in all, Fable III continues in the tradition of great story-telling and immersive narrative and is definitely a game you should check out.