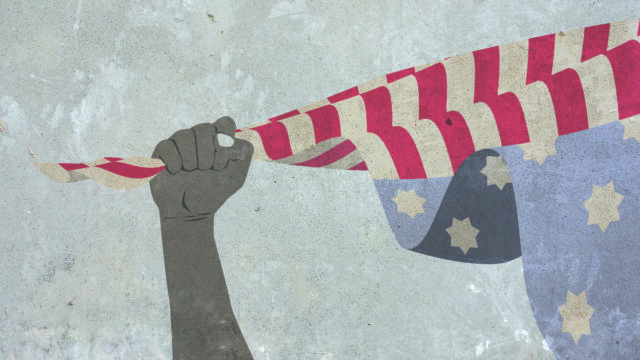 Reiland Rabaka’s got a diagnosis for the American people: historical amnesia.

“It would be great,” Bernice King, Dr. King’s daughter said in a May 28 tweet, “if folks were as zealous about evoking my father to eradicate racism as they are about evoking him to criticize how people respond to racism.”

Rabaka, a professor of African, African American and Caribbean studies at the University of Colorado Boulder, says, “There’s a tendency to become very nostalgic about things from the past.”

“Some of those same people who are [saying] that the Civil Rights Movement was more moderate than what we’re doing now in the contemporary moment, that [today’s protests are] more militant, more riotous, more uncontrolled, maybe they don’t remember that Rosa Parks was arrested, and that for an African American woman in 1955, that’s violent.”

Maybe, Rabaka wonders, they’ve never heard of Bloody Sunday: March 7, 1965, when Alabama state troopers beat protesters with billy clubs as they crossed the Edmund Pettus Bridge just outside of Selma to commemorate the death of Jimmie Lee Jackson, who had been shot just weeks earlier by a state trooper while trying to protect his mother during a civil rights demonstration. Days after Bloody Sunday, Dr. King led another group of protesters across the bridge, but vigilantes were waiting; they killed James Reeb, a white pastor from the North.

“This is what I mean by historical amnesia,” Rabaka says. “All the acts of violence that were perpetuated against the civil rights workers, and somehow, when people actually began to talk about self-defense — people like Angela Davis and the Black Panther Party — well, you can see with the Breonna Taylor case there’s just no socially acceptable way black folk can practice self-defense.” (Taylor, a 26-year-old black woman, was shot and killed in her own home in Louisville, Kentucky, on March 13 after police executed a no-knock search warrant. Her boyfriend, believing the home was being burglarized, opened fire. He was initially charged with attempted murder of a police officer, but that charge has been dropped. Police found no drugs — the reason for the warrant — in the apartment. There is no body cam footage.)

Self-defense, Rabaka reminds, is “an automatic right for white folk:”

“Patrick Henry said, ‘Give me liberty or give me death,’ but if [Black Panther Party co-founders] Bobby Seale or Huey Newton were to stand up and say the exact same thing, they’d call them domestic terrorists.”

President Trump would likely call them “thugs,” as he called Minneapolis protesters in a tweet on May 29. Or yes, domestic terrorists, as he has called antifa, a term for a very loosely associated far-left movement that Trump and others on the right are asserting, with little evidence, incited violence at protests in Minnesota. (A white nationalist group, Identity Evropa, was actually found to be posing as antifa on Twitter, pushing violent rhetoric related to the protests.)

And yet when armed, predominately white protesters stormed the Michigan Capitol, demanding an end to state pandemic restrictions, Trump tweeted, “These are very good people, but they are angry. They want their lives back again, safely!”

There’s a discrepancy in the way America talks about rebellion. Riot or resistance? It depends on what’s being protested.

Danielle Kilgo, an assistant professor at The Media School at Indiana University Bloomington, studies media framing. In a recent paper, she and co-author Summer Harlow found that local and metro newspapers constructed narratives around the Women’s March and anti-Trump protests which “significantly explored their grievances.”

“On the other end of the spectrum,” Kilgo wrote for NeimanLab, “protests about anti-black racism and indigenous people’s rights received the least legitimizing coverage, with them more often seen as threatening and violent.”

In 2004, researchers from the University of Southern California and the University of Kansas analyzed coverage of the 1992 Los Angeles uprising and the 2001 Cincinnati uprising — both commonly referred to as riots — and compared it to coverage of historical uprisings and found “a shift in the way media frame rioting.”

“Race riots of the 1960s are often linked to and situated within the social protest frame by media,” they wrote. “Contemporary riots like those in Los Angeles and Cincinnati are most often framed as ineffective, illogical protests against established order, and not as mechanisms for progressive social change.”

“Language is important,” Rabaka says. “I will tell you in African American studies we don’t say race riot. Why? A riot connotes a level of irrationality, it’s just ‘wild’ and all over the place. I’m not saying that that does not happen or has not happened, but really … these are urban rebellions. They are rebelling against a system. These are forms of resistance. And we, African Americans, have a long history of this going back to the enslavement period: You working for nothing. They’re feeding you chitlins and you’re wearing rags, so you go out there and break that rake. You might mess up the plow. So this whole notion of property — what about the fact that African Americans, we were the property about 150 years ago? This is why that slogan ‘black lives matter’ is so meaningful to us because no one’s ever said that.”

Omar Montgomery, a professor of ethnic studies at CU Denver and president of the Aurora chapter of the NAACP, reminds that “it was violence that got us here today,” the violent murder of George Floyd at the hands of a police officer with a history of violence and complaints against him.

“And, unfortunately, it’s going to be situations like this where you see people in multiple cities express their voice in multiple ways that’s going to get the attention of the government to make changes in the policing system so that we will not have to revisit this every two or three years,” he says.

Montgomery says the same thing happens after every racial-justice motivated uprising: government officials commission a report on why it all happened. There was the Kerner Commission after the 1967 uprisings in Detroit and elsewhere; the Christopher Commission in the wake of Rodney King’s brutal beating at the hands of cops in LA in 1992; the U.S. Department of Justice’s investigation of the Ferguson Police Department in 2015.

The difficulty, says Polly McLean, a professor of media theory at CU Boulder, is that America is facing a culture shift.

“I have a dog analogy. If I had a little puppy and it pooped and I just put a nice rug over it, what’s that do? That’s what America has been doing since the Civil War.”

“And culture is extremely hard to change,” she says. “It’s not that all you are going to need to do now is create diversity and inclusion; that’s a Band-Aid approach that makes you feel good.”

The shift has been in progress for decades now, with countless metaphorical Band-Aids employed against countless literal bullet wounds, lynchings and police beatings.

“In the ’50s and ’60s we were at the height of the Civil Rights Movement,” McLean says. “The struggle was continuing for racial justice for African Americans in the U.S. We knew that the Civil War abolished slavery but didn’t end discrimination. You legislate and you wash your hands. So [on campus] we created a diversity and inclusion unit … but what does that mean? How is it being handled?”

Rabaka, Montgomery and McLean all point to education as being the critical catalyst for shifting American racist culture, from elementary school history classes to undergraduate journalism courses.

Michael Harriot, senior editor at The Root, has implored white people to stop telling black people how to protest, and disabused folks of the notion that the Civil Rights Movement was peaceful. In TRT World, Severina Ware posits that civil unrest is the only way black voices are heard. In mainstream media, Jelani Cobb took to the New Yorker to ask people, specifically white people, to consider the impact of sharing images of violence against black bodies when they’ve rarely spoken out on such causes before.

“If we don’t transition into systemic change, we’ve lost,” Montgomery says. “This is the time to push district attorneys to start looking at systemic change. I’m already on the phone with DAs, attorneys general and [other law enforcement] because I want systemic change, not just a place where I can let loose my frustration. Because I don’t want to have to look at or attend another funeral of a black man that has died because we didn’t change the policy to hold people accountable.”

“I have a dog analogy. If I had a little puppy and it pooped and I just put a nice rug over it, what’s that do? That’s what America has been doing since the Civil War.”