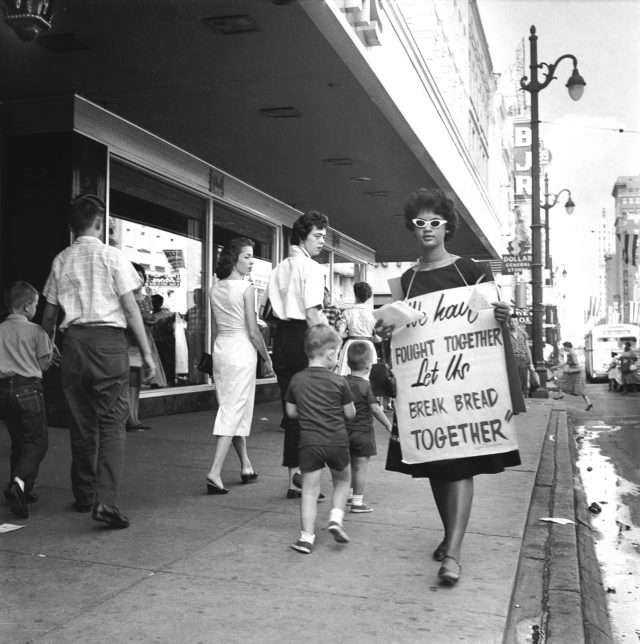 “Before [Withers] left the room he’s like, ‘Just don’t touch anything; I’ll be back in 15 minutes,’” Lauterbach says on a recent phone call from his home in Virginia. “But this meeting’s going on for an eternity and I’m seeing Ernest Withers photographs everywhere. I’m finally like, well, it’s not gonna hurt to take a look.”

In this moment, Lauterbach is ensconced in a photographic history of America’s Civil Rights Movement, flanked by prints of Moses Wright pointing his finger at the white man who killed his great-nephew, Emmett Till; of Martin Luther King, Jr. being stopped by police at Medgar Evers’ funeral; of Black sanitation workers during a solidarity march in Memphis, Tennessee.

Suddenly, the door to the studio flies open.

“And [Withers] yells, ‘I told you not to touch anything!” Lauterbach remembers with a laugh. “And I didn’t know at the time he was a man with secrets.”

After Withers died in 2007, it was revealed he’d been an FBI informant for nearly two decades, reporting on the same activists he photographed and befriended. The revelation threw Withers’ historic photography into a new light for many people who suddenly saw him as a traitor.

In his 2019 book about Withers—Bluff City: The Secret Life of Photographer Ernest Withers—Lauterbach uses primary and secondary research, including interviews with Withers’ daughter, Rosalind, to paint a picture of a brave, motivated, clever man who made decisions based on the context of the systemically racist world in which he lived.

“You can see the photography, you can see the talent, you can see the greatness, you can see [he bore] witness to important historical events,” Lauterbach says. “You can understand the risks that he took, and by the way, for practically no money. He covered the Montgomery Bus Boycott for like $29. He covered the Emmett Till trial for like $50: No healthcare, no benefits, nothing. It was very much a passion for him, something he valued and cared about. This is not a world of his making; if you take systematic racism out of the picture, he doesn’t make those decisions, that world doesn’t exist. And so to put all that weight on him, to blame him for [being an informant] is blatantly unfair when you can see what he really was about. We’ve all made compromised decisions.”

When a collection of more than 100 of Withers’ photographs comes to the Dairy Arts Center, viewers will have the chance to hear his daughter, Rosalind, speak about her father’s life at the opening reception on January 16.

“I think that we all have to understand the entirety of this history,” says Annet James, president of Boulder County’s NAACP, which is bringing the Withers’ exhibition to the Dairy. “We don’t know if he was compromised or not, and we asked [Rosalind] to address [his years as an informant for the FBI]. But we feel like his pictures tell the story.”

“[Withers] would see Elvis in all of these unscripted, voluntary sort of situations,” at Black blues clubs around Memphis, Lauterbach says. “He really appreciated Elvis, his genuine love of Black music and culture . . . Elvis was controversial for his embrace of Black culture, so even though we look at him now as having appropriated Black music and Black fashion, at the time, that was very risky for Elvis to engage in in the white mainstream culture of America. [Withers] took photographs of Elvis with BB King that were republished throughout the Black press, publications like the very high profile Chicago Defender, the largest circulating Black daily newspaper of the time. Photographing Elvis with BB King, that really, I think, shaped perceptions about Elvis in a positive way. Just the fact that he was willing to be seen with a Black person in a harshly segregated time said a lot about Elvis’ character, and Withers, having seen Elvis in person as a real guy, and not just as a photo opportunity, I think he understood that and was able to communicate that to a broad audience with his work.”

Outside of his photography, Withers was a member of the NAACP, a World War II veteran, and a former Memphis police officer.

“He was a patriotic person,” Lauterbach says, “and today patriotism is not in style, so we have a hard time wrapping our heads around that. He was an NAACP man, and that means that he had a particular strategy in mind with regard to how the Civil Rights Movement should be pursued. He was not about violence, he was not about militant reactions on behalf of African American people. He and other NAACP types from the late ’50s and early ’60s leaned into America living up to the Constitution. You see that in the legal strategy that the NAACP pursued during that time period, and that’s what Withers was involved with initially. Now, things changed over time, and as the movement became a little bit more chaotic and a little bit more violent, he got thrust into the heart of the drama of the Civil Rights Movement.”

Fast-forward 60 years and America has been reminded that the fight for civil rights in this country is not over. As the world entered lockdown in an attempt to mitigate the spread of the coronavirus, protests broke out in America in response to the murder of Black citizens like Ahmaud Arbery, Breonna Taylor and George Floyd.

“George Floyd’s murder was so visible, everyone had a front row seat to that,” says James of Boulder County NAACP. “The NAACP saw an influx of people interested in learning more and becoming members of the branch, so our branch really did grow substantially in membership. But our goal in Boulder, based on its demographics, has not been to do celebrations around Black History Month. Our goal has always been educational. . . . I feel like an exhibit like this offers an opportunity for conversation and dialogue and discourse. History belongs to everyone, you know, it’s not a Black or white thing. We all share in the triumphs and abject awfulness of this history—you own it as well as I do.”

The Walk With Me Withers Photos Exhibition presented by NAACP Boulder County will be open from January 16-February 27, Dairy Arts Center, 2590 Walnut Street, Boulder. The opening reception begins on January 16 at 3 p.m.

This event and the full series of Walk With Me events are free and open to the public, for more information visit hnaacpbouldercounty.org/walk-with-me