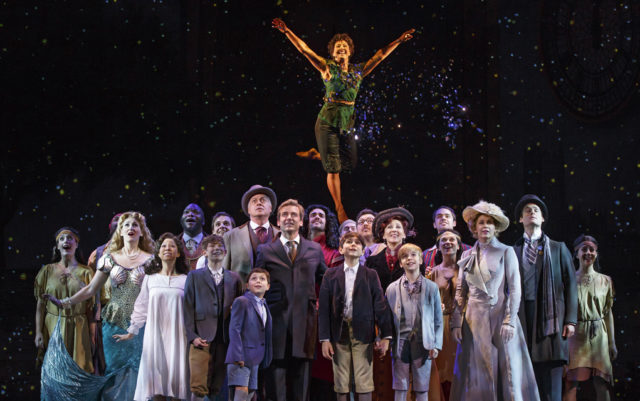 To create a world as magical as Oz or as enchanted as Narnia, the writer must have one key ingredient. As Willy Wonka walks through his chocolate factory, he sings a song dedicated to that ingredient, “Come with me, and you’ll be in a world of pure imagination. Take a look and you’ll see into your imagination.”

More than a century ago, with the help of some new friends, J. M. Barrie created Neverland and introduced the world to Peter Pan. And it is Barrie’s story that is brought to life in Finding Neverland, now playing at the Buell theater through Jan. 1.

But while Mr. Barrie had imagination in spades, the creators behind Finding Neverland did not.

The musical, based on the 1998 play The Man Who was Peter Pan and then later the 2004 movie adaptation, premiered in England in 2012, later moving to Broadway in March of 2015. It tells the story of Barrie, a successful playwright in early 1900s London, desperate for a new idea to inspire him. He befriends a woman and her four sons, who reawaken his creativity and subsequently inspire him to create the The Boy Who Never Grew Up. Barrie’s peers, wife and producer don’t understand his newfound love for play or the children’s show he’s writing, but Barrie knows he’s stumbled upon something special.

There is a lot wrong with Finding Neverland. It has many tenants of a lazy, lackluster musical: stale jokes, forgettable songs, forced choreography, unnatural pacing and unnecessary use of video projections. Plus, the overbearing shadow of Peter Pan felt heavy handed, as if checking off items on a list of references to make.

One of the biggest faults of the show is a lack of character development.

The show assumes the viewer will fall in love with its characters before giving any reason as to why. It’s neglectful to assume we’ll care about Barrie’s character just because he wrote Peter Pan, or appreciate a bunch of children just because they’re playing pirates.

When the musical fails to set up the characters initially, the rest of the show suffers. As characters have emotional moments, the scenes fall flat because there’s no connection with the audience.

Furthermore, this void of character development leads to confusing character decisions that make no sense. Early on, we’re introduced to Peter Llewelyn Davies, a sad kid who doesn’t want to play pretend with his brothers. Yet his vague sadness can’t be that deep. Within one song, he’s completely cleared of any residual feelings holding him back. And it turns out, he has the biggest imagination of them all! This evolution feels trite and rushed.

Similarly, later in the show, Barrie’s crotchety producer is complaining about children in one moment — dismissively calling them “things” — then a few beats later, he’s singing about the importance of seeing the world through the eyes of a child. These character shifts are jarring and devoid of meaningful explanation. It’s a disservice to the characters and the storyline.

With the success of the 2004 movie and the unwavering adoration of Peter Pan, Finding Neverland was a safe bet, and safe bets in theater can still give way for shows that breathe life into beloved franchises — notably 2003’s Wicked.

Cash grabs in theater are never entertaining to watch. Finding Neverland’s lack of fantasy is uninspired, at times bordering on insulting. To spend two and a half hours preaching about the importance of imagination and then deliver this musical is the equivalent of being in the desert watching a musical about the refreshing qualities of water. Stop singing about the damn water and hand me a glass!

There are some small pieces throughout the show that remind the audience of the potential of theater. A song sung with shadows is a simple, yet stunning visual. Cute kids and an adorable dog provide moments of glee. And a character’s final goodbye is riddled with the magic of pixie dust.

But as an overall note for the production: more glitter, always.

In the end, Finding Neverland is a missed opportunity for fun and creativity. I’d liken it to a run-of-the-mill sitcom on primetime television: Easy, recognizable subject matter with no real substance, and complete with laugh track. Unfortunately, multiple times during this show, I found myself reaching for the remote control to see what else was on.