Art has always been a central focus for Gunbarrel resident Michael Hamers. His passion from childhood translated into studying fine art in college. But due to a dislike of his instructors and paper maché, he switched to commercial art and went on to have a lucrative career in graphic design, working for companies like Ball Aerospace and Harley Davidson.

But times moves fast, and before Hamers knew it, midlife was looming. Crisis ensued — not just one but many. With the country in the midst of recession, Hamers floundered under the weight of financial burdens, leading to him question his career path. He realized he lacked a spiritual connection and a creative outlet, which awakened him to one of the major problems in his life: Even though he always considered himself an artist, he hadn’t produced any of his own work in years.

“I just had a complete collapse,” he says. “ I had no confidence at all and… I just spiraled down into this depression. I had nothing to hold on to.”

Feeling like there were too many problems in his life to fix, and unsure if he even wanted to fix them, Hamers contemplated suicide. He turned to alcohol for solace, sipping vodka around the clock. He continued with this behavior for almost a year until, with the help of his wife, Hamers found Alcoholics Anonymous (AA).

Upon giving up the bottle, Hamers says the universe began conspiring to get him out of depression. One of the most significant changes in his life was his rediscovery of art. During his downward spiral, not only had Hamers stopped creating his own art, but he’d stopped listening to music or reading poetry or going to art shows.

So as he focused on his sobriety, Hamers started listening to Flamenco music, singing “Good Day Sunshine” every morning, and reading E.E. Cummings and other poets. He also picked up a paintbrush and produced his first creation in years: a watercolor painting of a blue jay.

While spending time in AA, he says he began meeting wonderful people, including several artmakers. He wanted to put together a local show focusing on addiction recovery featuring his new friends. The show opened at the Firehouse Art Gallery, and then it grew in size and moved onto NCAR. It’s now in its latest, and biggest, incarnation at The Dairy Arts Center, entitled Art as Medicine, showing through Feb. 26.

For the first time, at The Dairy show Hamers opened up participation to include all sorts of recovery, from addiction, illness, PTSD, grief and more. The show focuses on the restorative and rejuvenating power of art.

“It’s about using art to try to heal the wounded soul,” Hamers says. “It has deeper access to your psyche … Using art will help you express things that are hard to express.”

The show varies in mediums and subject matters. Some deal directly with the source of pain, while others are more metaphorical, and others that are seemingly unrelated to the direct root. In the show, Hamers’ pieces range from a photo of a flower, to a collage of happy yet slightly ironic signs, to a surrealist drawing that deals with momentum.

The only common trait of every contribution is an artist statement. Each work is accompanied by a note from its creator detailing their own personal struggle and what role art played in their recovery. The stories are rich and varied, including someone who uses art to help deal with their Parkinson’s disease and someone else who uses it to combat negative feelings from past sexual abuse. 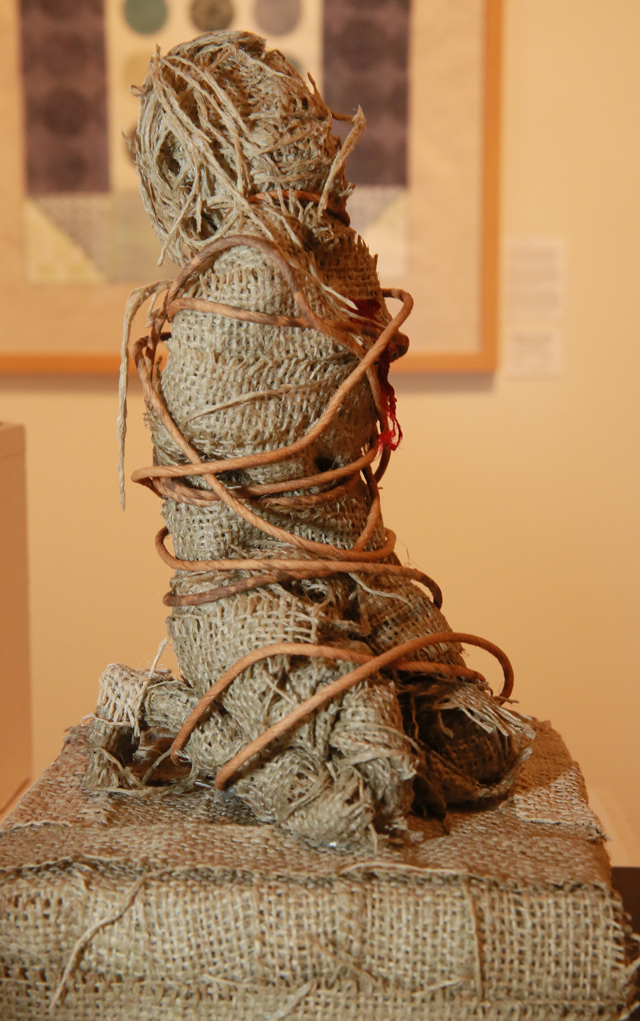 Some of the most striking contributions in the show are three small sculptures titled, “Grief,” “Depression” and “Anguish” from Paula Peacock. Using burlap, thread and wire, her sculptures depict figures writhing in pain — one curled in the fetal position, another on its knees, the third hunched over its knees — each figure bound, unable to move. They speak to the viewer on a primitive level, touching the darkest depths of pain. Upon reading her statement, the viewer discovers more layers, learning that Peacock created the figures after the murder of her son Christopher.

Peacock is a self-taught painter, calling herself a late bloomer because she started in her 40s. She also teaches art classes at Soft Voices, a drop-in center for adults with mental illness. Creatively dormant for a year after her son’s death, Peacock says she had been going through the motions for her classes, feeling frozen in terms of her personal work. That is, until she started crafting sculptures for a class she was planning.

As the sculptures poured out of her, she says they were painful to make but ultimately cathartic.

“After the completion of each one, I just felt a little bit better,” she says. “They just helped me work through the grief. … And each one helps. It takes me a step closer to hopefully someday being myself again.”

In addition to grief and addiction recovery, the exhibit also features expressions of physical rehabilitation, like the work of sculptor Grace Gee Ajemian. Three years ago, Ajemian went into septic shock, an infection that causes organ failure and has a low survival rate. She went on life support for a week and stayed in the hospital for more than a month.

In the show, she displays “Healing Grace,” a collection of thread sculptures including a heart, lungs, stomach, intestines, brain and liver all organs affected by her illness. Every piece has a forceful presence, commenting on the duality of these body parts.

“I wanted to echo that strength and resiliency, and yet how they’re fragile and delicate,” Ajemian says.

Moreover, each deals with an emotion she was trying to reconcile. As it says in her statement, Ajemian used Chinese medicine techniques, which attach certain emotions to an organ: The heart deals with joy, the lungs grief, the kidneys fear, and so on. As she sculpted an organ, she dealt with that emotion, working intuitively, not following a logical order but following what needed attention in the moment. She calls the process healing and gratifying, and it also let her take the power back as illness ravished her body.

Throughout the exhibit, there’s a question of cognizance: Do the pieces deliberately relate to the steps of recovery or are they consequential of recovery? Every artist has a different answer. Hamers might say both, while Peacock says it spilled from her subconscious. For Ajemian, it was intentional.

“Working with different issues is a way to bring consciousness to the issue,” she says. “It’s very conscious for me and it’s very healing for me because it’s a safe place to explore that.”

Art provides a space to tackle intimidating notions. It can also be used for reawakening. This past December Hamers celebrated four years of sobriety. He says art played a major role in kindling his passion for life.

“I feel like I was on one edge of the universe, and I woke up the next day and I was on a completely opposite edge,” Hamers says.

When making commercial art, he says he realized he was building other people’s dreams, not his own. Reconciling years of denying his self expression, art became his tool.

“I found myself. I fell in love with the world again and with myself, all at the same time,” he says, wiping a tear from his eye. “It was like a rebirth. It was like being born again into a more beautiful place.”

The power of the show lies not only in the diversity of experience, but the commonality of emotion. While someone might not relate to Hamer’s path to sobriety or Ajemian’s physical trauma, their work may still touch a nerve for those who have known the pain of other wounds.

While every art show is personal, the artists in Art in Medicine intentionally detail their journeys for the viewer, giving insight into their struggles through their work and their artist statements. The veil of anonymity gets lifted, and what we’re left with is an exhibit that celebrates resilience in the wake of tragedy.

While Peacock’s burlap sculptures came from a place of sorrow, she calls them her little saviors in her time of need.

“Art was the only thing that has kept me going,” Peacock says. “I found a purpose again.”