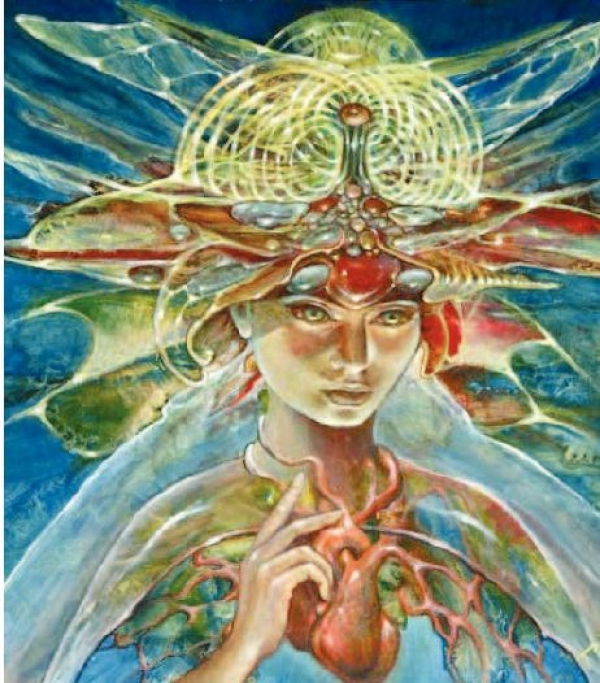 Boulder-based artist Martina Hoffmann says growing up in equatorial Africa as a blond-haired, blue-eyed child was “a beautiful experience.” The German-born painter remembers how indigenous children would surround her, touching her skin and hair with curiosity whenever her family traveled into the small villages outside of their home in Cameroon.

“People were generally very friendly and open, but as a white minority in black Africa, I definitely stuck out,” Hoffmann says. “It really set a standard for how I like to approach otherness. I grew up with such a diversity of concepts and cultural contacts that I knew in my heart at an early age that in the end there’s only one spirit and one humanness.”

Hoffmann, now a well-known artist who shows her work internationally, attended Catholic missionary school in Cameroon, where her father was working as an engineer. When she returned to Germany to study sculpting at the Johann Wolfgang Goethe University in Frankfurt, she took the imagery and inspiration of Africa with her.

“Africa is such a magical continent — the colors and the flora and the fauna are just so potent there,” Hoffmann says. “I think I subliminally absorbed a lot of that.”

The impact of that imagery is evident in Hoffmann’s paintings, which often depict female figures transposed over delicate psychedelic geometry and shifting shapes of animals and snakes. Her work is often classified as “visionary art,” a term that Hoffmann believes can also be applied to the work of artists such as Hieronymus Bosch, William Blake and Salvador Dali.

“I like to say that visionary art is the oldest uninterrupted art form on the planet. You can trace it from the beginning of culture and humanity if you look at the early cave paintings that depicted shamanic scenes of transformation,” Hoffmann says. “Visionary art is the most direct type of art; it’s a tool for understanding spirit and otherworldliness.”

“We both paint in a similar vein, but Robert likes to paint the astral planes, and my emphasis is on the inner planes and the mystical experience,” Hoffman says. “I like to bring awareness to how we can all access expanded states of consciousness, through meditation, shamanic work, or whatever it takes. It’s such an important thing to tap into right now as the Earth is going through so many changes. We really need to change our awareness as a planetary unit and a global community.”

In an effort to spread this message, Hoffmann and Venosa spend a majority of their time traveling around the world teaching workshops and doing live painting performances at music festivals. Their workshops focus on helping people tap into their own unhindered creativity while also teaching them modern approaches to time-tested painting techniques.

“Often there’s a tremendous amount of fear in people when they start with the creative process,” Hoffmann says. “Everyone has incredible insights within them at any given moment, and we’re just trying to offer people an approach to make those insights more available.”

When they’re not traveling and teaching, Hoffmann and Venosa spend their time painting in their home studios in Boulder.

“Boulder is a wonderful base. It offers the right combo of healthy organic lifestyle and good consciousness,” Hoffmann says. “People are very awake here, and they know what’s important in life: a healthy body, a healthy mind and a good spiritual base.”

Hoffmann is adamant that art has great value, not only as a transcendent experience, but also as a force that shapes and structures the material world.

“In mainstream society, art is considered a luxury, something that’s only acceptable for the chosen few. People think that artists just have a good time and goof off,” Hoffmann says. “Robert likes to say that if you look around, everything that you see was created by an artist at a certain point. Behind every object, there’s always an artist that combined functionality with a certain appealing shape. Art is the fundamental structure of our lives; it’s an amazing service.”