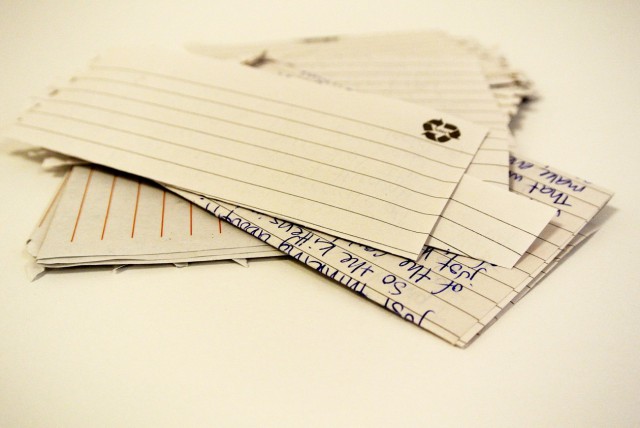 Courtesy BMoCA and the Museum of Broken Relationships

When the Museum of Broken Relationships put out a press release in November announcing an upcoming exhibition in Boulder, it began with a question: Do happy people break up too?

Boulder, the writer had read, was said to be one of America’s happiest cities. But the associate curator of the Boulder Museum of Contemporary Art (BMoCA) had called, having seen the Museum of Broken Relationships in Zagreb, Croatia, and had asked the staff to do an exhibition in Boulder. When the museum travels, it brings 50 or 60 items from the existing collection to join items collected from that local site — all donations to join the museum’s permanent collection.

“We will either be left empty-handed or we will prove that break-ups do not stand in the way of happiness,” the announcement reads.

BMoCA has been collecting donations since December, and the number of artifacts of relationships gone wrong are now crowding the corners and covering the desk in Associate Curator Petra Sertic’s office. And on Feb. 14, BMoCA will open the 26th traveling exhibition of an art display that is part art, part anthropology and part therapy.

“I was [in Croatia] and somebody said I should check it out, this funky little Museum of Broken Relationships, so I did. And yeah, it is really funky, but it’s also a really strong idea about offering an opportunity to deal with and overcome and let go of human emotions related to breakups, which is a part of our modern life more than it maybe used to be in previous times,” Sertic says.

“But although that is the case, there still isn’t a process where you can deal with it. You sort of lock yourself in a room where you can deal with it and come out when you’re done, right? But here we have an opportunity to have social engagement, something maybe that’s a ritual, something that can be acknowledged by everyone and shared with others. … You have to find a way to let go, and there aren’t really that many places to do so. We have rituals for everything else, markers of engagements and weddings and so on, even graduation, but nothing that marks a breakup, although there are so many emotions involved with that it is a significant experience in our lives.”

The relics that have come rolling in arrive with curatorial details such as the location and dates of the relationship and a brief narrative on the story of the object.

For a pair of signs for a landscape architecture company, the story goes, “These signs have been lurking in the back of my garden for nearly 20 years. I don’t want to write about the relationship and its ignominious end. We worked together for another two years until I threw a tea mug (the big one) through the window, missing his head by about nine inches — right where I aimed its flying through the air. He was wrong thinking I would ‘just get over it.’”

Other items include a shadowbox of items from a wedding, less important now that the divorce has been finalized; a wooden box full of notes from a relationship that started in high school and died in college; stacks of love letters returned to the writer; a lock bought with a “love bridge” in Paris in mind; a toaster taken in vindication from a splitting household; a wedding dress that came with the story: “I met him when I was 22 and fell head over heels in love for five minutes. I dreamed it would work. We dated for seven years and decided we should get married. I bought the first and only dress I tried on, not really thinking about what I wanted.”

“Unwanted Letters” is among the donations received by BMoCA,

From a curatorial perspective, the objects present some challenges: how to exhibit — in a way that’s tasteful and feasible — an object like a Post-it note. The Museum of Broken Relationships’ style is to go with a formal approach, and BMoCA has freshly painted white pedestals for the occasion.

“They look really formal, like a museum exhibition, and all these everyday objects will be elevated, given full attention, a little spotlight,” Sertic says. “So it literally came out of the closet; it’s out in public, put on a pedestal for everyone to look at.”

On their own, these items wouldn’t be considered a work of art, and plenty of them would be considered things never meant to be shared with a person outside that relationship, like love letters. But the objects aren’t really the focus.

“The story, of course, that goes with it is the thing that is the real idea,” Sertic says. “It’s all these different stories. It’s not just one person’s story, it’s really all of our story.”

The story of the museum itself starts, naturally, with a breakup. In 2006, Olinka Vistica and Drazen Grubisic were ending their relationship and moving apart.

“We had a discussion of what to do with the things that — not the useful things, but the things that are sort of like a token of love, things that you bought each other that really mean nothing but just as a show of affection,” Grubisic says. “It was just like, wouldn’t it be great if there was a museum where you could store these things so they don’t bother you so they’re safe and your memories are somehow safe because of that, and you can return to them if you want to.”

The two artists put in a proposal for an exhibition in Zagreb, and won.

The collection began with items from their relationship and those of their friends’, and that first exhibition was followed by invitations to bring the exhibition to other places.

“After four years of traveling and seeing that people react exactly the same wherever we go, we decided to open a real museum in Zagreb,” Grubisic says.

What that’s meant, of course, is that he and Vistica have continued to be friends, working and traveling together in the years that have followed their breakup.

“It wasn’t really easy, of course,” he says. “It takes a lot of self control and understanding and so on, but when we started with the museum it just transformed our relationship, and we’re really good friends.”

The project, both in terms of their experience and in terms of the museum itself, challenges what seems to be the common knowledge on how to handle a breakup.

“One of the main things I always say is, when you look at all the newspaper articles, self-help books and so on, most of them deal with it like, just destroy everything, get rid of everything and as soon as you get better, just jump on a new train and here we go again,” Grubisic says. “And you know, I think if you spend four or five years with somebody, I presume if you’re a normal person and you’re not pathological or something, at least two-thirds of that time was really good. If it didn’t work out, it doesn’t mean you have to hate that person, forget that person and so on and so on. That’s what life is. It isn’t a fairy tale — you meet someone and live happily ever after. Your life will consist of different relationships and different people who will influence you in a different way, and I don’t think destroying everything that might remind you of it is a good way to go.”

“A Box Made of Matches,” from Maribor, Slovenia

Vistica and Grubisic arrive in Boulder on Feb. 9 to help put the exhibition together. They’ll bring about 50 items from their permanent collection, plus 10 from the 110 donations received at a recent exhibition in Paris, to supplement the nearly 30 donated in Boulder.

“That’s the real work, choosing the objects and putting them in perspective and thinking where we’re going, so there will be some objects you will really easily relate to, some objects that will surprise you, we try to create a roller coaster of emotions so people can laugh and cry at the same time,” Grubisic says. “Between the lines of really personal relationships between two people you can read out a lot of different things, economical problems, wars, racial problems — it’s all there, of course, because if it’s present in society it will show up in a relationship as well.”

Three years of collecting objects have presented ongoing surprises and “Wow!” moments, but, he says, there’s one object that still tops the list: an axe.

The axe was purchased after a live-in girlfriend announced she was leaving for another woman, and she departed on a vacation with that new love interest. Every day the abandoned lover started to feel depressed, she’d take an axe to the left-behind furniture; when the girlfriend came home to collect it, she found it in tidy piles of pieces.

“An Ex-Axe,” from Berlin, Germany

It’s the kind of train wreck of a story we all love to gather around and watch — and the end result of a tour through the museum’s collection is part funny and part heartbreaking, always layered with the gripping nature of watching someone else’s life fall apart.

“I love a good story. I feel like people are voyeuristic at heart, so who does not want to check out these remnants from relationships?” says Dan Condon, who donated a box of gourmet microwave popcorn from a relationship that ended in November. “I just, I had to part with it. We were supposed to eat it together.”

The ritual, and the storytelling, were healing, he says — and now, there’s the possibility of meeting someone new, perhaps at the Valentine’s Day reception for the exhibition’s opening. While it might seem counter-intuitive to spend a holiday dedicated to romance at a museum devoted to its demise, Sertic says there’s no need to view the occasion as one for bitterness and misery.

“For me, it’s not so much a cynical approach, but rather one that sort of offers some kind of other opportunity that says that yes, this is also part of our life, but it can be dealt with funny or, if you feel sad, then that’s OK too, or if you’re still angry, let it all out,” she says. “It’s all OK. It’s nothing that we need to hide.”

And what the record shows — among the happy survey-takers of Boulder just like everywhere else in the world — is that life and love really do go on, even after a breakup.

Olinka Vistica and Drazen Grubisic will be doing an artists´ talk at 6:30 p.m. Feb. 13 at the Art Students League of Denver, 200 Grant St., Denver, and will be at the opening reception at 6:30 p.m. Feb. 14 at the Boulder Museum of Contemporary Art. The Museum of Broken Relationships exhibition will be on view until May 26. For more information, visit www.bmoca.org.