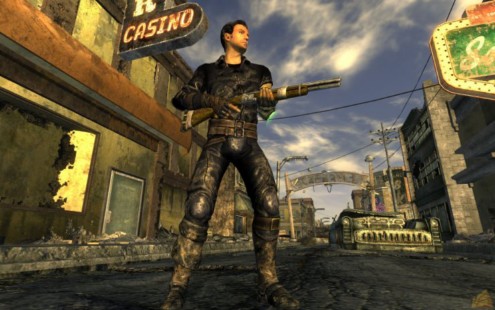 Back in 2008, the folks at Bethesda Games released a classic game in Fallout 3. Stranded in the wasteland of a post-apocalyptic America, the player is on a journey to find his father while trying to survive among vigilantes and radiation-infected creatures trying to kill him. In Fallout: New Vegas, we return to the same world several years later but with a different story and different cities.

At the beginning of Fallout: New Vegas, players assume the role of a courier just going about his business trying to do his job by delivering a package to New Vegas. He runs into some… complications that basically leaves him near death. Once he regains his strength in a dusty old town outside of Vegas, the investigation of the mystery behind that package begins.

The game play is almost identical to Fallout 3 with a bit more customization options for weapons and other items. You can play the game as a first-person shooter or as a third person action game, but the game is much more immersive in first-person and gives you a greater sense of control. As with Fallout 3, you earn and gain skills and attributes to better help you in your adventures. Whether it’s improving your computer skills, melee skills or conversation skills, they’re all valuable and will be of necessary use in certain aspects of the game. Deciding whether to add one attribute versus another will have approaching obstacles in totally different ways. When a simple conversation could be the easiest way get you the information need, you may have go find a dusty computer to get because you chose to increase your tech skills instead of your conversation skills.

The graphics are pretty much the same as Fallout 3. The desert landscapes still look great, but the animation of characters is still buggy. But it’s all about the gameplay and the story along with the dozens of side missions that have stories and adventures just as fun and intriguing as the main story. The game and map are huge, taking about 100 hours to complete everything in the game. Fallout: New Vegas definitely worth your coin.