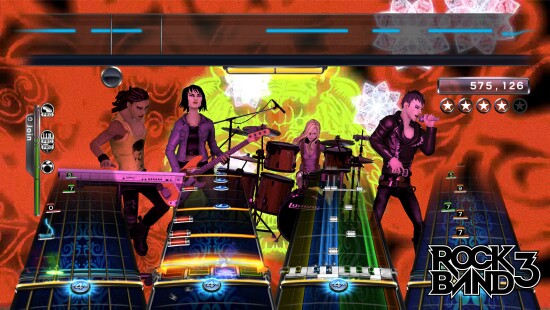 Rock Band 2 came out way back in 2008, and we’ve had Rock Band Beatles and Rock Band Green Day to hold us over until Rock Band 3. While the band-specific music games are great if you’re a fan of the band (and who isn’t a fan of The Beatles?), most players want a variety of music to choose from and play with.

Rock Band 3 comes with 83 songs; plus, your previously downloaded songs are available along with the option to import a lot of songs from Rock Band and Rock Band 2. But the big thing about Rock Band 3 is the addition of the keyboard controller. We didn’t get a playable keyboard peripheral but apparently there’s two ways to play it: the easy way, where it’s just like playing the guitar except on a short keyboard and no strum bar, or the Pro way, where you play every note of the song and can even possibly learn basic chord progressions in the process. To promote the new peripheral, Rock Band 3 has a keyboard-heavy tracklist, so expect some Elton John and The Doors. There’s a also a new Pro guitar controller, with 100-plus buttons, to help you learn the basics of playing guitar and as well as cymbals to attach to your drum set to make feel more real… we guess.

The gameplay received an overhaul. Instead of going on a World Tour, opening up countries and venues to play in, you’re given challenges as a band. The challenges range from “Beat these 12 songs with a 3-star or higher rating” or specific instrument-related challenges. This definitely makes the game a bit more challenging and long lasting because there are dozens of challenges at each difficulty level, and the more songs you import or download, the more challenges the game creates for you.

Thanks to the capability to import songs from previous RB games, the ability to continually download more songs and the still-addictive gameplay, Rock Band 3 is easily the best music game on the market.