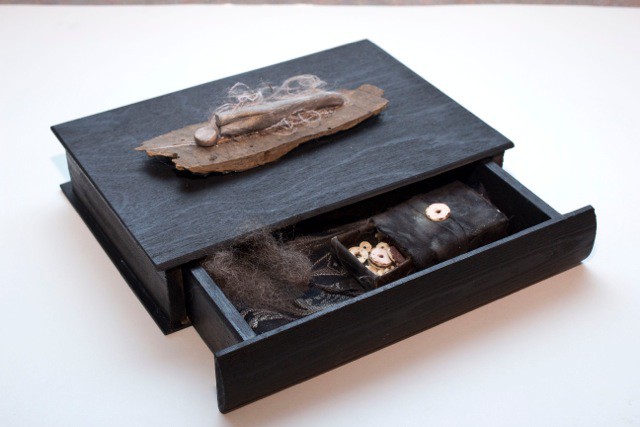 Go ahead and play with matches — that was the directive Boulder area artists got last year from Sue Chambers Wallingford, core assistant professor at Naropa’s art therapy program.

Wallingford and a team of eight Naropa art therapy grad students were looking for a creative way to engage local artists in producing artwork for an auction benefiting a nonprofit they’ve launched to help sex trafficking victims in Cambodia. On March 17, all that artwork will be unveiled at the “Small Resources = Big Possibilities” gala. The money raised will support this year’s trip, an initial training meeting with the staff of a Transitions Global respite house for girls rescued from brothels, and scholarships for future trips.

And it all started with an unintentional $50 donation.

Each Christmas, Wallingford says, her mother donates money to a charity as a present for her — but never to the charity that she would have chosen herself. So last year, she says, her mother took a different approach and gave her daughter the check to use however she wanted.

“So I carried it around in my purse for a long, long time, that $50 check, because I was like, ‘I don’t know what I’m going to use this on, it’s like a big deal, I have to spend this right,’” Wallingford says.

In the end, she spent it on 500 matchboxes. “Matchbox parties” to make art from the matchboxes merged with a discussion among Wallingford and the art therapy students about how to do art therapy work internationally, and the matchboxes became a fundraising tool.

Instead of donating to a nonprofit, Wallingford was starting her own.

Students worked sometimes up to 30 hours a week on the project while continuing their art therapy graduate work. They were instrumental in selecting the issue of sex trafficking and partnering with the organization Transitions Global after three of them met Pam Harvey, national director of education and advocacy at Transitions Global.

Transitions Global already employs some art therapy and Harvey says she’s seen its effects in action with the rescued girls.

“They’ll be asked to draw something and the expression is joyful, it’s hopeful, it expresses their dreams. Many of them want to create a life that includes their family, a happy home, deep roots,” says Harvey, who recently returned from a trip to Cambodia. “They’re very much the same as any teenage girl in the world. They have hopes and they have dreams and it all revolves around beauty, so to be able to express that and to bring those hopes and dreams to the surface… It’s healing.”

In their research on sex trafficking, they’ve run up against some scary statistics, like that one in 40 girls in south Asia will be trafficked, Wallingford says.

After the success of the matchbox parties, more than 50 Boulder artists were invited to produce work with a matchbox to be auctioned off as part of the ongoing fundraising efforts. Artists who got involved include Bruce Campbell, Ken Bernstein, Dawn Spencer Hurwitz, Dan Friedlander and Lisa Nesmith.

“People who have been traumatized in that way certainly do need some specific interventions to help them heal, and I think that art therapy is a tremendous resource for all kinds of healing processes,” Nesmith says.

“Even though we’re not going to be doing direct, intensive art therapy with the girls — we’re going to be doing more training with the staff and then more art projects with the girls — even still, I think there’s something around the idea of sustained engagement with girls who have had trauma,” says Ariana Tosatto, a second-year student in Naropa’s art therapy program who will be going on the trip to Cambodia. “Unconscious, emotional stuff just comes out for everyone in art, I think, especially when that’s the intention and space provided behind it.”

The hope is that they’ll open a door for these girls on how to use local resources to make art and leave them with skills, ideas and the feeling that they have something they can give back.

“It’s a way to help boost these girls’ sense of self because they feel so much shame,” Wallingford says. “They’re a commodity, they’re to be sold, and they don’t feel like they have much else to give, so this will be a way for them to give a part of themselves.”

As a skill, art could also lead to making crafts that can be sold at the market, giving the girls a way to make money that has nothing to do with selling themselves.

The principle of the matchbox applies — making art, making something useful, from something that might otherwise be thrown away.