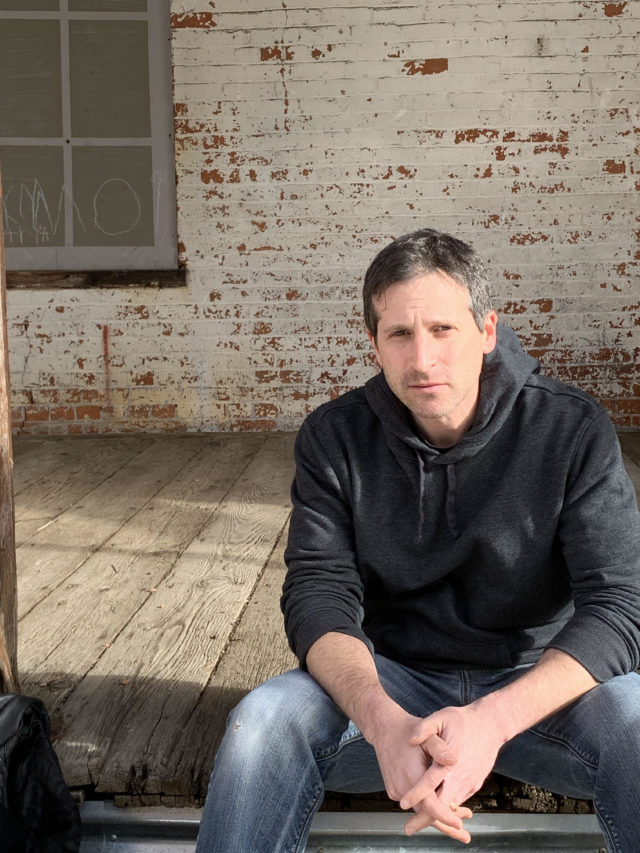 But there’s another Colorado, the one of small towns and open country far east of the Rockies.

That’s where author Jon Bassoff turned his attention for his new novel, Beneath Cruel Waters, a dark drama about family secrets, guilt and tragedy.

Bassoff, who lives in Longmont, opens the novel this way:

“Except for the lines of cottonwoods and willows nestled against the banks of the South Platte River, the landscape surrounding the town of Thompsonville, Colorado, was mainly desolation and starkness.”

For grist in the landscape mill, Bassoff likes to get in his car and head east.

“In Colorado it seems like you can just drive forever,” he says. “You’re not seeing anything, but you’re sort of seeing everything as well.”

Bassoff’s fictionalized Thompsonville—a hybrid of an Eastern Plains town and Longmont—provides an appropriately bleak landscape for this twisted story.

“For me, with this kind of noir stuff that I write, I really love the idea of the open spaces,” Bassoff says. “And there’s so much of that there, so much loneliness, and you can see how it can relate to the loneliness of families. Just that openness, the loneliness of the Eastern Plains and the stark beauty of it as well.”

The story begins with the family matriarch, Vivian, killing a man in cold blood. The past reemerges when Vivian kills herself 34 years later at the very same location she committed the murder.

Her son, Holt Davidson, comes home for the funeral and finds a gun, a Polaroid of the dead man and a love letter hidden under the floorboards of his childhood home. Davidson makes it his personal cause to figure out how it all went down.

The narrative moves back and forth over more than 30 years, with Bassoff deftly depicting the pivotal moments as Holt uncovers a harrowing family melodrama.

Bassoff says it’s hard to explain why he’s drawn to writing about dark material, but he knows why he sets these stories in what he calls haunted landscapes.

“There’s the contrast of the freedom, because of how much openness there is, versus being trapped in your life and in the small town that you find yourself in,” he says.

Bassoff has been writing for more than 20 years. This is his ninth novel. As he’s aged and watched his children grow, he’s more willing to allow his work to take a softer edge.

“In my previous novels there was a lot more malice,” he says. “In this book, there are bad decisions and terrible things happening, but for maybe the right reasons.

“I don’t think I’ll ever write a feel good novel or a great coming of age novel. But I think there has been a little shift where I’m least able to give the characters the hope that they might have the possibility of redemption.”

Bassoff has taught English and creative writing for over a decade at Longmont High School, where his students hold him accountable for getting his writing done.

“Having my students look up to me and say, ‘Hey, our teacher actually writes books as well,’ it makes me feel good, but it also gives me a little bit of the push to keep going, to keep walking the walk instead of just talking the talk.”

He had a former student come to one of his readings recently and hand him a book of self-published poetry.

“It was wonderful,” Bassoff says. “The students give back to me a little bit more than I give to them.”

He has a few other projects burning, including a book that was optioned for film more than a decade ago, and a screenplay he developed with Irish director Ivan Kavanaugh.

“There’s all these things that may happen, but I’ve been waiting long enough to know until they actually get the cameras out and start filming, that you can’t count on anything,” he says. “I’m just assuming it won’t happen. If it does I’ll be really happy.”

1. ‘The Killer Inside Me’ by Jim Thompson

“A novel written in the repressive 1950s and told from the point-of-view of a sociopath. It is terrifyingly funny.”

2. ‘The Butcher Boy’ by Patrick McCabe

“Never has a terribly sad book been so much fun to read. The unreliable narration combines a blend of dirty realism and violent fantasy, and the farther along you get in the novel, the more difficult it is to tell them apart.”

“O’Connor’s writing is filled with religious extremism, grotesqueness, and mental illness—all the things that make America great. If I could have written a single book this would have been it.”

4: ‘The Unconsoled’ by Kazuo Ishiguro

“I’ve always been fascinated by surrealism and expressionism, and The Unconsoled takes a multitude of dreamlike images and expresses them in a fascinating and disorienting story.”

5. ‘The Man Who Mistook His Wife for a Hat’ by Oliver Sacks

“Sacks was a brilliant neurologist. These case studies are heartbreaking and fascinating and show us the power of the brain and the danger of assuming in absolute truth.”