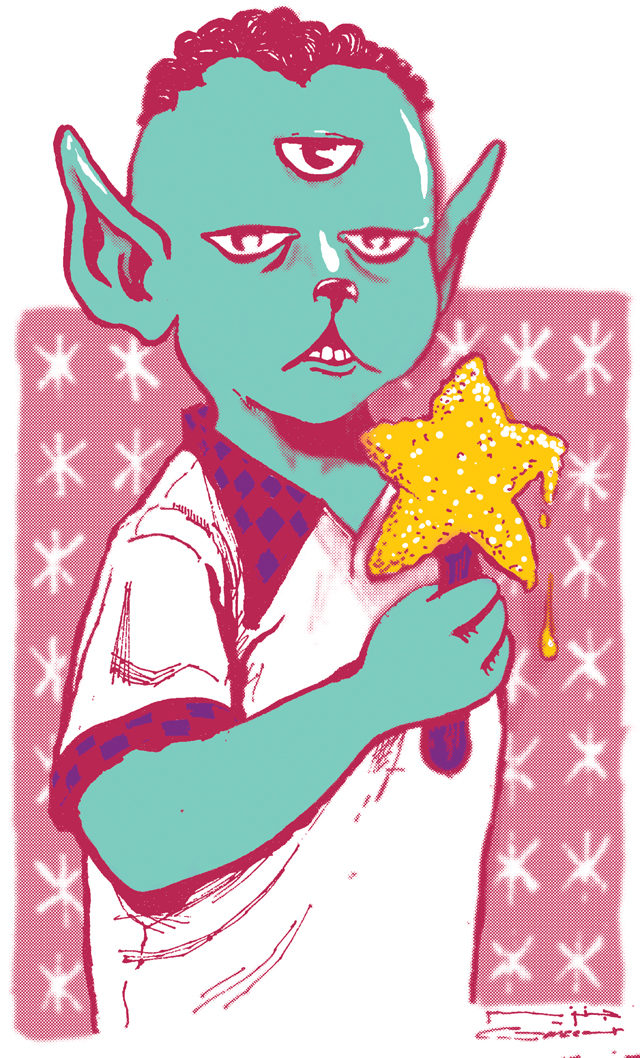 “Like campers around a campfire sharing ghost stories, except all the stories are supposedly true, and the thing we’re gathered around is not a fire but a shared sense of camaraderie. Much like a campfire, it’s this camaraderie that gives us a sense of security.”

So says the narrator of the short story “Charlie and the Aliens” written by Ganzeer. It’s a story that finds three aliens, narrator included, imprisoned together on the Moon. In the cell, there’s also a Human Being, which the reader soon learns is somewhat of an endangered species, confined to reservations as alien colonists, who, presumed to be the planet’s sole ambassadors, have taken over the Earth.

As the story unfolds, the reader begins to see themself in the narrative — the characters and themes are thinly veiled metaphors applicable to present-day American life.

The short story is published as part of an anthology of writings titled Who Will Speak for America?, birthed out of national Writers Resist events held around the country on January 15, 2017 — Martin Luther King Jr. Day, as well as five short days before the inauguration of Donald Trump.

“With words we can fight back,” says Nathaniel Popkin, an author and co-editor of the new anthology, who participated in the 2017 Writers Resist event in Philadelphia.

One of the pieces of work read at the event was a speech by Barbara Jordan, the first black woman to speak at a Democratic National Convention in 1976. It was a pivotal moment in American politics, soon after the Vietnam War and Watergate, which more or less destroyed Nixon’s presidency and the public’s faith in politicians along with it. Right in the middle of her keynote speech at the DNC, Johnson asks a question that is perhaps as relevant today as it was then:

“This is the great danger America faces — that we will cease to be one nation and become instead a collection of interest groups: city against suburb, region against region, individual against individual; each seeking to satisfy private wants. If that happens, who then will speak for America? Who then will speak for the common good?”

The question ultimately inspired the title of the anthology of creative work — from poetry to essays to fiction, comics and photography — edited by Popkin and author Stephanie Feldman.

“I think it creates a real sense of energy and dynamism that replicates the feeling that we had at Writers Resist, and that sense of diversity of American voices. It’s not just who we are, but it’s how we speak and how we express ourselves,” Feldman says. “I think that it’s important to show that people have different, not just perspectives, but different priorities and interests, and together they have something to say about society today.”

For the project, Popkin and Feldman enlisted 40 different creatives from a variety of backgrounds — from lawyers and activists to evangelical Christians, children of immigrants and recent émigrés.

People like Ganzeer, the Egyptian artist and writer who came to the U.S. in 2014 amid increasing hostility in his home country following the 2011 revolution. He now spends the majority of his time working on a graphic novel from his home in Denver.

“All the narratives happening in this country are still narratives that are still muddled in that haze of confusion and none of it should be. I think it’s very obvious to people from the outside, especially [those] who might have had similar experiences where all of a sudden all of the hazy bullshit in the world might have been lifted, even periodically,” Ganzeer says. “I think that helps you see other things really clearly.”

The call for submissions was open to any form of expression, asking people to not just consider American ideals, but their experience of the country in light of the recent shift in government and public discourse. Through the variety of voices and articulations, they not only address the question of who will speak for America, but also who will be allowed to speak for America.

“The best way for me to address that [question], is to step outside, try and have the reader, who is likely going to be American, have the story transport them outside of that context, outside of America, and maybe outside of our current reality entirely,” Ganzeer says. Through the art of science fiction, he created a world where Human Beings are rare and Americanism is an ancient religion, practiced by the persecuted few, who fight to preserve the purity of the country’s ideals.

“In the far, far future, this idea of America at all is an ancient obsolete concept, which is something to think about,” Ganzeer says. “Of course Americans might find it difficult to even be capable of thinking that since it’s such a young country. But people who come from the old world, where many civilizations have risen and fallen, you can say that yes, this nation will cease to exist in the future.”

The anthology as a whole speaks to this particular moment in history and yet also seeks to provide commentary that transcends a specific point in time. Compiled throughout 2017, the editors submitted the manuscript, in some ways, unsure of how the works would translate almost a year later. But its publication, in early July 2018, came on the heels of the Trump administration’s zero tolerance policy that separated thousands of children from their parents at the U.S. southern border, the Supreme Court’s decision to uphold the president’s controversial travel ban, and increased questions about Trump’s relationship to Russian President Vladimir Putin. And who knows what tomorrow will bring.

“The book feels as relevant as ever,” Feldman says. “As a fiction writer and a teacher, one thing I always come back to is that the specific can be universal. We can take this specific moment and examine it in a way that is going to yield insight that is larger than just, say, Donald Trump.”

As writers, the people represented in Who Will Speak for America? have a unique ability to respond to the current political and cultural climate through their art. As readers, it brings us understanding and clarity, along with the challenge to critically think about the world beyond ourselves.

“In the United States, we don’t elevate our writers to any particular degree. There are other countries and cultures where writers are looked to in times of crisis. And we don’t have that recent tradition in this country,” Popkin says. “This is a chance for writers to grab the mantle, because we need writers to write the future.”