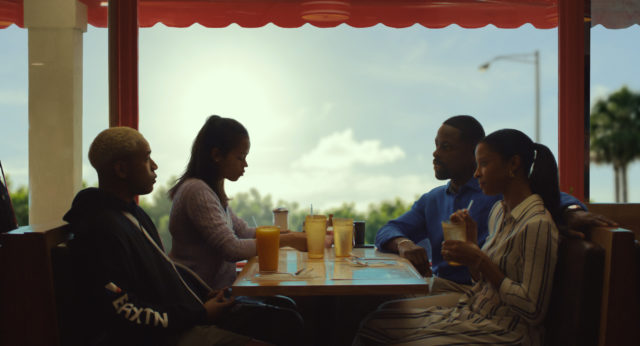 For writer/director/editor Trey Edward Shults, making movies is a family affair. It doesn’t matter if he’s shooting in his parent’s home in Spring, Texas, for 2015’s Krisha, or in the neon glow of Southern Florida for his latest, Waves.

“I try to keep the same atmosphere as the first one,” Shults explains. “That was friends and family at my Mom’s house for a week, and we loved each other, and it was one of the best weeks of my life.

Made for $30,000 and populated primarily with Shults’ family, Krisha was a stunning debut, one that connected Shults with entertainment company A24. Next came 2017’s psychological horror flick It Comes At Night — a story of a family trying to stay sane and survive an apocalyptic plague. Now comes Waves, Shults’ most complex work to date, and his best.

“This one has been brewing for a very, very long time,” Shults says. “At first it was just music and images, that was it. And teens. And high school. And that was all I had. Over the better part of a decade, or so, it was always building and building.”

Shults builds Waves with aesthetic layers of suffocating immersion, and hurtles his characters toward tragedy both emotionally and visually. Working with cinematographer Drew Daniels, Waves changes the aspect ratio of the frame (from 1:85 to 2:40 to 1:33) at key moments in the movie’s narrative to create either tension or release.

“Tyler’s [frame] is closing in on him,” Shults says. “And Emily’s is opening up.”

Daniels, who has worked with Shults since Krisha “is my biggest collaborator,” Shults says. “We go through the script, talk about everything: The intention, the overall arc of the entire story, but also scene-to-scene, moment-to-moment. … To where it’s like a second skin, and we know it so well.

“We know why we’re shooting it this way, why we’re in this ratio, why we’re using this lens, everything.”

The result is the visual equivalent to a sharp intake of breath and a jagged exhale.

It’s effective, but it wouldn’t be nearly as immersive if not for Trent Reznor and Atticus Ross’ score — a composite of ambient sounds and composed music to echo the visual’s subjective qualities.

“The score became the spirit of the movie at times and the spirit that links brother and sister in the two halves,” Shults says, explaining that the goal was to give the feeling of internal sound — as if what the audience hears is emanating from inside the characters. “Trent and Atticus would take sounds from the world and manipulate them and use them musically, to where it feels like we’re hearing it through the [character’s] heads.”

But Shults is quick to point out that image and sound are tools — emotional extensions of the characters — which are palpable thanks to his collaboration with actors, notably Harrison, whom he worked with on It Comes At Night.

“We already have trust, we already love each other,” Shults says. “We’re trying to build each other up and make something great.”

And as the other actors came on, Shults expanded what he started with Harrison to bring each actor in on the creative process.

“We talk about a lot of the scenes beforehand and analyze and collaborate. I’ll do sessions with the actors, and I’ll go off and do some more writing and then send it to them,” Shults says. “On the day, it can change from doing it almost exactly as it is in the script to ad-libbing within what the scene is, to doing the scene and then improvising.”

Shults points to a scene where father and son arm wrestle in a diner for bragging rights.

“The scene was done, and I just kept rolling and let them play,” Shults says. “I just try to keep it fun and collaborative.”

Shults’ trust in collaboration shows. Waves is an emotionally rich, aesthetically dense piece of work with all parts working in unison. It’s one of the year’s best movies, and it opens nationwide Dec. 6.