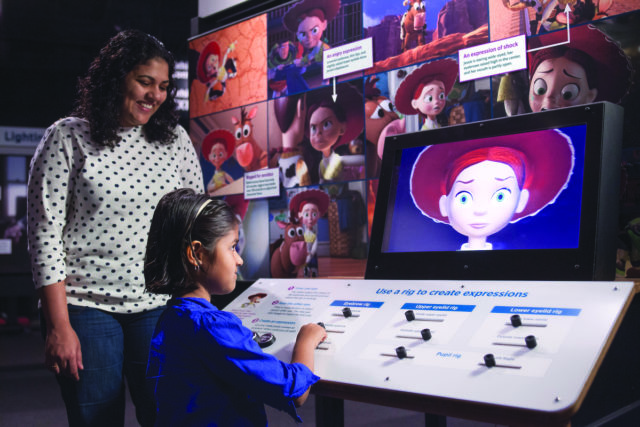 “We believe art is a powerful gateway drug into science,” George Sparks, CEO of the Denver Museum of Nature & Science (DMNS), says of its newest exhibit, The Science Behind Pixar. “This exhibition, more than anything I’ve ever seen, highlights the benefits of STEAM — science, technology, engineering, arts and math.”

Curated by Ka Chun Yu — who received his Ph.D. from the University of Colorado Boulder in 2000 and is DMNS’ chair of the Space Sciences department — The Science Behind Pixar is an immersive experience where guests can understand how technology actualizes the artist’s inspiration.

“These tools include computer programming, obviously, but also mathematical functions to help model and animate characters and objects — their physics, and their biology that’s needed to simulate how things look and how they move,” Yu says. “And, perhaps, most importantly, the physics of light and reflection and refraction.”

With 50 interactive elements — from artwork, videos and audio to the ability to animate, light and create stop-motion shorts — The Science Behind Pixar is a delight. Like the finely tuned movies Pixar makes, the labor and the love behind DMNS’ exhibit is potent.

The Science Behind Pixar begins with a movie, short and sweet, that lays out how Pixar makes a movie; from a simple line drawing of how Woody (Toy Story) swings his arms while he walks to the fully realized Land of the Dead (Coco). They call this process the “Pixar Pipeline,” and when you enter DMNS’ main room, you enter the Pixar Pipeline.

From here on out, you choose your own adventure. As DMNS senior media producer Greg Koronowicz explains, “Animation is a non-linear process.” There are major signposts along the way — modeling, rigging, surfaces, sets and cameras, animation, simulation, lighting and rendering — but you don’t have to visit them in any particular order to understand how a movie comes together. Makes sense — rarely does Pixar move from one step to the next when making a movie, and a 360-degree exhibit at the center of the room illustrates this process perfectly.

But, if you want to start at the beginning, turn right and go to the case of character models. For over a century, animators have used physical models to help them understand how to animate the contours and shadows of a character. How would Collette’s nose look when she turns to profile (Ratatouille)? Check the model. How deep of a shadow would Heimlich’s rolls cast on his body (A Bug’s Life)? Check the model.

Next, head to the rigging section: the process of animating bones, joints and muscles to create believable expressions of emotions. The station has a large screen showing Jesse’s face and a series of nine sliders (Toy Story 2). Those sliders control Jesse’s facial “muscles.” Move each one, and you’ll get an idea of how much work goes into a simple smile. Imagine the work involved when they crafted “When She Loved Me.”

And while every station is engrossing, the lighting section might be the exhibition’s highlight. For Pixar, lighting doesn’t just mean creating and controlling light; it means creating and controlling the right light. When Arlo (The Good Dinosaur) is bathed in bright sunlight, it is not the same sunlight Dory (Finding Nemo) sees filtering through seaweed. Desert sunlight does not shine through Syndrome’s dark lair (The Incredibles) anymore than Mater (Cars) rumbles through the candy-colored memory balls of Riley’s mind.

Light creates space, and it creates mood. Using both a physical and a computer-generated model, guests can manipulate various dimmer switches to adjust the lights in Carl and Ellie’s living room (Up). Crank the sunlight and lamps up as far as they’ll go, and you can practically see the two lovebirds sitting in their chairs — his boxy and squat, hers curvaceous and tall — holding hands while reading. Slide those same levers to the left, and Ellie’s lamp cast a pall over the room. Suddenly, a bicycle built for two now carries only one.

There’s more to do and see at The Science Behind Pixar than you can manage in a single session. TVs and artwork surround each station, showing the work in every possible stage of creation. It’s not like walking around inside Wall-E, Inside Out or Ratatouille; it’s like walking around the collective brain that made those movies. You see their inspiration unfolding as you walk from one station to the next, and you feel their creativity exploding with each technological advancement. To paraphrase Pixar co-founder Ed Catmull: It’s people, not computers, who make Pixar movies.