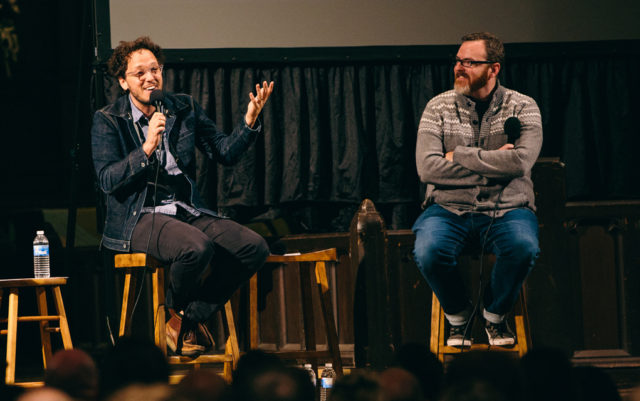 Michael Gungor isn’t one to identify with any particular label or camp of people adhering to a rigorous set of beliefs. He doesn’t like to be put in a box or forced to pick sides. If he had to choose, he’d call himself a “Buddhist, Hindu, Christian mystic,” but that doesn’t seem to really encompass all that he is either.

In an increasingly polarized world — politically, culturally, religiously, theologically — Gungor’s positioned himself right in the middle of all of it. And he’s not alone. Along with his close friend Mike McHargue, aka Science Mike, and a few others, Gungor hosts The Liturgists Podcast for the “spiritually homeless,” people who have “an interest in spiritual things, but don’t belong in any of the camps,” Gungor says. It’s as much for atheists who have spiritual experiences as it is for Christians who feel uncomfortable in church, as much for the skeptic as the devoted religious practitioner. There’s something for everyone it seems. And it’s resonating.

The podcast has had as many as four million downloads an episode. A more accurate monthly audience is anywhere between 250,000-300,000 active listeners. And the breadth of that audience is quite diverse: 48 percent of listeners identify as Christian, 14 percent conservative evangelicals, while another 12 percent are atheists. Since starting in 2014, the audience has become progressively less Christian, more female and more LGBTQ, but plenty of their regular listeners are people of faith, male and straight.

“We’re doing a strange thing where we’re really trying to have truly open, nonjudgmental conversation and that’s led a lot of people who don’t really associate with each other in most media audiences to converge in ours,” McHargue says.

About to launch its fifth (loosely defined) season, the show merges science, faith and art centered around topical conversations between the hosts, and sometimes other guests. Episodes cover everything from fake news and the societal and personal impacts of social media, to the paranormal, mystical experiences and speaking in tongues. They’ve addressed racism, ableism (discrimination against people with disabilities), the reality of climate change and suffering in the world. They’ve facilitated conversations about sexual ethics, abortion, modern masculinity and feminism. Nothing is off limits, and no viewpoint is left out.

“We’ve always tried to not demonize the other side,” Gungor says. “We didn’t want to just become another camp to exclude others from. The whole reason we started this is because we felt excluded. We felt not seen and not loved because we didn’t belong with our beliefs.”

The two originally met at a party in Denver, instantly connecting over their shared experience of being “totally at odds with our world,” Gungor says. At the time, McHargue was both a Southern Baptist deacon and an atheist, who had a mystical experience he couldn’t explain. Gungor was a successful Christian musician who had lost his faith. They had both grown up in a conservative Christian culture with a rigorous set of beliefs that they were in the process of deconstructing.

Out of these conversations The Liturgists Podcast was born. It’s a vulnerable space, a place to talk about deeply personal “faith transitions,” while giving others permission to do the same. It’s a window into both their personal thoughts and emotions, as well as their friendship.

Sometimes episodes are simply conversations between Gungor and McHargue, but often they talk to other guests — friends whose personal histories intimately connect to the given topic.

“We are so careful about not just preaching to the choir when we want to offer different perspectives and through the whole thing allow stories to kind of take the front stage rather than just our ideas,” Gungor says.

The show saw a surge of growth after the 2016 election, almost doubling its audience. While 81 percent of white evangelical Christians voted for Donald Trump, there were plenty other people of faith who questioned why so many of their friends and families voted for a candidate seemingly at odds with the morality they had been taught their entire lives.

“A lot of people did a double take on their world,” Gungor says.

Then, in early 2018, they expanded to include two new co-hosts, Hillary McBride, a Canadian clinical therapist, and William Matthews, a black Christian singer-songwriter originally from Detroit.

“We’ve learned from what’s happening in the cultural conversations. We’ve listened to people, to women and to marginalized voices, and we’ve heard what they have to say,” says Gungor (who is biracial but admittedly “white-passing.”) “And we have a microphone so we want to amplify voices that aren’t being amplified.”

As the show has continued to grow and evolve, Gungor and McHargue have followed suit. The Liturgists offer “Gatherings” periodically around the country, a weekend conference to connect to these conversations in person. Their second Kin Men’s retreat, which seeks to break down the toxic aspects of masculinity, sold out in pre-sales. Now they’re offering Tabs and Wafers events (a confusing name, they admit, both charmingly self aware), a place to explore “personal spirituality without marginalizing other people.”

They are pursuing personal projects as well. Gungor just released a new book, This, about being present in the moment, about being deeply aware of everything and everyone that is in front of you right now. “I’ve become less soapboxy about my position for others and the way I think justice should be accomplished and have tried to pay more attention to who’s right in front of my face,” he says.

And McHargue has another popular podcast called Ask Science Mike, where he answers questions about both science and faith, explaining how the two can work together as allies to advance humanity and preserve the planet.

But there’s something that keeps drawing Gungor and McHargue back to the premise of their original mission with The Liturgists Podcast.

It’s about understanding and being understood, whether that’s to connect with like-minded people who don’t fit in any sort of religious construct, or present opposing viewpoints in the midst of so much polarization, The Liturgists are there.

Perhaps one of the most impactful episodes for both Gungor and McHargue was the 2015 LGBTQ episode where they explore the intersection of Christianity and the LGBTQ community. Clocking in at more than two hours, Gungor and McHargue talk to a variety of Christian leaders and LGBTQ people about the deep-felt pain and rejection many have felt through their interactions with conservative Christians and churches. Published a month before the Supreme Court ruling that legalized gay marriage, for Gungor it felt like career suicide. He could see his Christian music career heading straight for a cliff. At the same time, he knew it had to be shared, and the response has only affirmed this.

To this day, nearly four years later, McHargue says he gets about three emails a week from people who were going to take their own life by suicide before hearing that episode. He meets happily married gay couples everywhere he goes, people who tell him the podcast gave them the courage to come out. They’ve heard from numerous parents who had been rejecting their LGBTQ kids, and the show brought them both understanding and reconciliation.

That’s not to say The Liturgists haven’t had non-affirming guests on their podcast as well, people who interpret the Bible in such a way that only allows for heterosexuality. But the power is in the discussion and disagreement, not in any sort of conclusion, Gungor says.

“Staying engaged with people that you have differences with is not easy,” Gungor adds. “But I feel like it’s necessary on some level, not just for the world but for us, for me.”

And that’s where it seems The Liturgists Podcast stands apart. When so much media is creating echo chambers where we all get lost in our own feedback loops, The Liturgists work hard to foster conversations between people seemingly at odds with each other.

“We’re not just coming at it to add a bunch of fuel to the already burning dumpster fire of our culture,” Gungor says. “We’re trying to see each other and love each other and connect and have a spirituality that transcends our differences.”

To do that requires a letting go of ego, a relinquishing of any sort of identity tied up in a belief system that requires uniformity.

“I think we can have our positions and our perspectives, but not cling onto them too tightly to think that we’re the saviors of the world, and if everybody thought like us the world would be better,” Gungor says. “We actually need oppositional viewpoints to remain a balanced organism as a society.”

Quoting the book of Proverbs, Gungor says a diversity of opinion is essential in creating a unified humanity. “Iron sharpens iron,” he says. “There is something about that clash that makes way for unity. You can’t have unity without difference.”

That doesn’t mean there aren’t some foundational perspectives behind The Liturgists, non-negotiables if you will. McHargue emphasizes that they draw the line at outright discrimination, when any one viewpoint turns into speaking ill of other people.

“We disagree with each other all the time,” he says. “What we agree on is universal human dignity, the right of every person to self determine how their life will play out and what they wish to believe.”

In that, The Liturgists, both as a podcast and a growing community of listeners, is a place for people in process, a space for them to question long-held systems of beliefs without fear of rejection or exclusion or judgement. And it comes from a deeply personal place in the hosts’ own stories.

“If you go back far enough in time, I’m a conservative evangelical Republican who thought we lived in a post-racial America and thought it was a sin for two men to be married,” says McHargue, who now considers himself wildly progressive. “And the only reason I was able to accommodate a more open, more inclusive view of humanity is because other people were patient with me while I was in process.”

The Liturgists seek to do the same for other people, but it can be a challenging balance to hold. It may not be easy, but in the end, it’s been worth it.

As McHargue puts it: “The reason I keep doing it is because every day I see lives being transformed from nothing more than our commitment to being honest about what we feel and what we’re going through, and giving other people, therefore, the courage to be honest with themselves.”