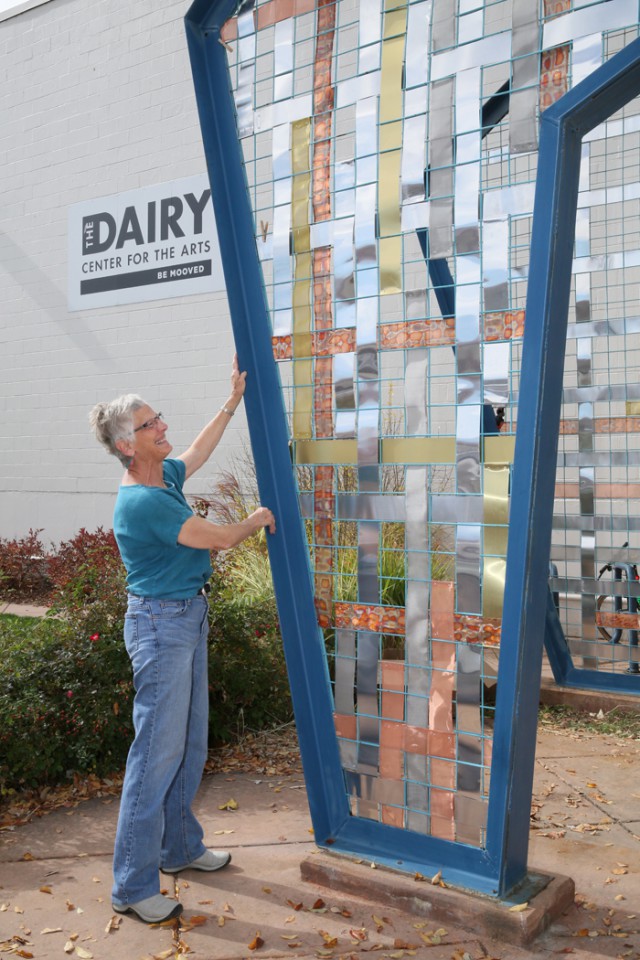 It may have been 20 years ago today that Sgt. Pepper taught the band to play, but it was 50 years ago that the Handweavers Guild of Boulder first met up to combine their handweaving powers. And back then, it was for handweavers only, leaving Boulder’s needlepoint community out in the cold.

But as goes technology, so goes handweaving; times have changed.

“As the guild grew, we’ve been more and more open to the textile arts,” says Guild President Elizabeth Shoeman.

The guild now supports and incorporates knitting, weaving, embroidery, needlework, jewelry-making, beading, sewing, quilting, pleating, rug-making and loads more, with more than 300 members taking part in seminars, sales and group projects. That rich and varied history is what will be on display at The Dairy Center for the Arts from Friday, Dec. 5 to Friday, Jan. 16 in an exhibit called The Art of Fiber: 50 Years of the Handweavers Guild of Boulder.

“The show will give a history not just of our guild, but of the fiber arts,” says Shoeman. “Macrame was so popular in the ’60s, and it’s kind of making a comeback.”

“Some of us still remember the giant macrame coats,” says Becky Vanderslice, another member of the guild.

“Some of us are trying to forget,” cracks Shoeman.

The Art of Fiber will include a juried exhibit, an invitational exhibit and a historical timeline of the development of artisan textile process and outcome.

While the exhibit doesn’t officially open for two more weeks, this week saw the grand unveiling of something special that the Handweavers Guild of Boulder created just for the exhibition: “Luminescence,” a massive installation that anyone wishing to enter The Dairy will have to walk through.

“We wanted to have a celebratory entrance,” says Shoeman.

“Luminescence” definitely fits the bill. Members of the Handweavers Guild of Boulder spent six weeks installing and the better part of a year planning the piece. The goal? “Weaving with light,” says Shoeman.

“Luminescence” began with the somewhat chain link-looking metal latticework guarding The Dairy’s front door, and then did what they do best: weave.

That’s where the piece’s name comes from.

“We saw the entranceway and said, ‘Those looked really drab,’” says Shoeman. “And it looked like a loom. We wanted to spell it ‘loominessence,’ because it’s a ‘loom in essence,’ but we got voted down.”

But for this piece, instead of snaking textiles through the makeshift loom, they wove in thinly sliced strips of sheet metal and copper mesh, brushed and treated aluminum and other irridescent metals.

“It looks like ribbon,” says Vanderslice, who is serving as project manager for the installation.

Mixed up with the metal are layers of LEDs and electronics so that the installation will move and react in waves as people pass through the arch. The movements are designed to move in motions known as “warp and weft,” the essential motions of weaving.

“An entire new [lighting control] program has been coded from scratch,” says Vanderslice. “That’s thousands of dollars of time from the digital lighting community.”

All the materials and labor for the installation were donated, time and cash value approaching $50,000.

“Luminescence” might seem like a bit of a departure from the exhibit it so grandly introduces, but Shoeman and Vanderslice don’t think so.

“There’s a real movement in the textile world, to go modern and use more radical materials,” says Shoeman.

One example she cites is the development of socalled “smart textiles,” which incorporate anything from circuits to solar panels into their construction. As part of the kickoff for The Art of Fiber, Barbara Layen, a researcher in electronic textile arts at Concordia University in Montreal, will give a lecture on Thursday, Dec. 4 at 7 p.m., that will cover her work finding ways to weave materials together with microcomputers, creating touchpads, biometric sensors and wireless transmitters.

“Ms. Layne will discuss the use of textiles to address the social dynamic of fabric and human interaction in both wearable systems and site installations,” reads a press release from The Dairy.

In a similar vein, Shoeman says that students at Nederland’s middle and high school STEM programs were invited to work on a project to go with the installation, designing e-textile clothes that will interact with the light patterns.

“We’re learning a ton about how all of these things work,” says Shoeman.

After the close of The Art of Fiber, “Luminescence” will remain up as a donation to The Dairy. Terms of the donation included that it must stay up for two years. Shoeman says that anything past that initial two years has yet to be decided.