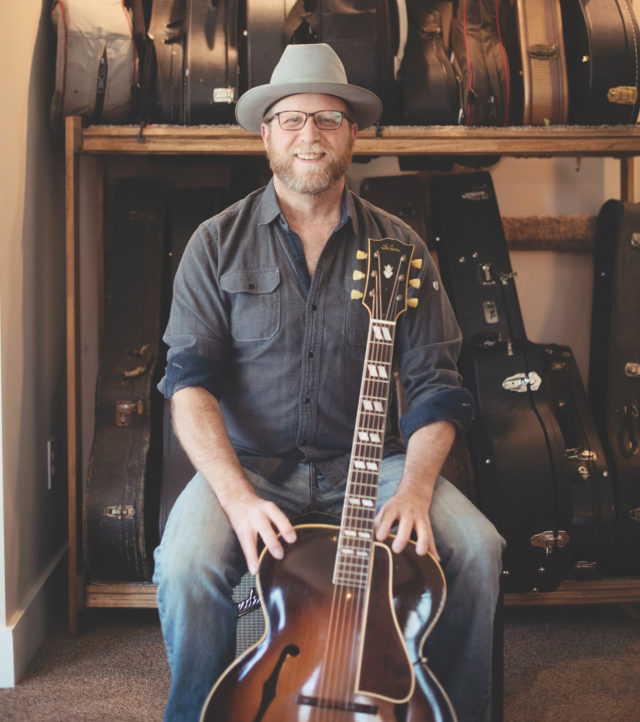 I met Greg Schochet in 2017 when he toured with Gasoline Lollipops in Belgium and Holland, filling in with us on lead guitar when Donnie Ambory was unable to travel. He’s good-natured and bright, able to crack up a room full of people with an onstage joke or lighten the mood with a zinger when tension gets tough on the road. With his elegant cowboy hats, Western shirts, jeans and boots, Schochet doesn’t immediately cut the image of someone born and raised on Long Island.

Over tacos at Torchy’s in Boulder recently, Schochet laughed when told he doesn’t come off as a New Yorker at all.

“I’ve been playing around here a long time,” Schochet, who sings lead and plays multiple stringed instruments on the new album, says. “I’ve been a pretty big part of everything I’ve been involved in, and I’ve established some element of a musical personality. It wasn’t that big of a leap in a way, but the reception was so good that it felt good right away, and it’s a really good record, I think.”

On Long Island, Schochet grew up with a father who “had a serious kind of Western fixation.” That’s partly why he ended up heading for the University of Colorado Boulder to study English after high school.

“We had been coming out to Idaho for summers since I was 9. My sister was already in college in Utah. I was headed West. I was sure of that, and I had traveled around following the Dead all the way to California in high school.”

Schochet started playing guitar in high school—cradling an old Gibson J-50 his aunt gave him—but didn’t start playing in bands until he got to Boulder.

“The social/musical aspect became important,” he says, “because I was pretty introverted.” Schochet played in a “typical college jamband” called Contraband as the ’90s began, playing classic rock at now-defunct venues like Tulagi’s and Penny Lane as the Samples and Big Head Todd were breaking out.

Schochet eventually moved to Nederland and “got enamored with bluegrass” as the genre was taking over Colorado and fomenting jamgrass.

“I went whole-hog on the mandolin and found the bluegrass community, and there was the Millsite in Ward on Saturday nights,” Schochet recalls. “It was huge. It was an amazing thing for a young guy who was into music and found other people doing it.”

Out of that obsession with bluegrass came Runaway Truck Ramp, Schochet’s first serious band, and one that emerged as Yonder Mountain String Band and the String Cheese Incident put the Front Range on the map at the turn of the century.

“We all wrote and we all sang,” Schochet says. “It was a kind of hippie version of the Band.”

Schochet’s romance with the West inevitably took over, though.

“Towards the end of my run with Runaway Truck Ramp I was getting really into country music. I started listening to Hank Williams, George Jones, Bob Wills, and I knew people who were into country—people in the bluegrass community who were adjacent to bluegrass. I started playing guitar again, and me and (local musician) Danny Shafer started the All-Night Honky Tonk All-Stars. It was great. It was sort of like what’s going on right now with Colter Wall and Tyler Childers: bluegrass, jamband-adjacent, rootsy, cool stuff. That pretty much set the course for what a lot of my musical identity is now.”

Getting so deep into country music led Schochet to playing with Halden Wofford and the Hi*Beams, a band he recalls being a fan of before joining. He spent 16 years with the Hi*Beams, playing pretty much every venue in Colorado, jamming with many other artists during that time and cementing himself as one of the most respected players in the area.

On Amblin’ Man, Schochet—who produced the album himself—played a plethora of notable stringed instruments, from a 1944 Martin OO-18 and 1993 Fender Telecaster to a 1987 R.L. Givens F6 mandolin, and some of the beautiful sounds he was able to produce are the result of playing through unmistakably classic amplifiers: a 1965 Fender Reverb, a 1940s Webster Chicago, and a 1951 Fender Pro.

“I took my time,” Schochet explains, “picking the songs, choosing the arrangements, choosing the players. I like well-crafted, even ‘polished’ musical recording, and so I put that kind of effort into it because that’s what I like to listen to.”

The album—which focuses on gorgeous covers of Jimmie Rodgers, Bob Dylan and more—was recorded and mixed in Denver and mastered in Boulder, and the personnel listening is a Who’s Who of Colorado talent.

“There were sections,” Schochet says. “I got my swing guys; I used the Hi*Beams for what we do; I used (Boulder-based band) Katie Glassman and Snapshot for some of the Western-swing stuff; and it was almost like a couple of different teams. I really enjoyed it. It was the classic ‘party in the studio’ thing, although we were actually working our asses off.”

It’s not much of an exaggeration to say that everything Schochet has learned and experienced since picking up a guitar in the eighth grade led to Amblin’ Man. This is him.

“I don’t think it’s possible to truly represent everything, but it represents where I’ve landed and it’s all in there somehow.”

Along with a fond reference to a University of Colorado class called Poetry of the West that sent Schochet down numerous rabbit holes of Western culture, Schochet repeatedly paid tribute to his late father during our lunch conversation.

“Musically, I definitely think the amount and quality of music I heard as a kid due to my father is a big factor in my development.”