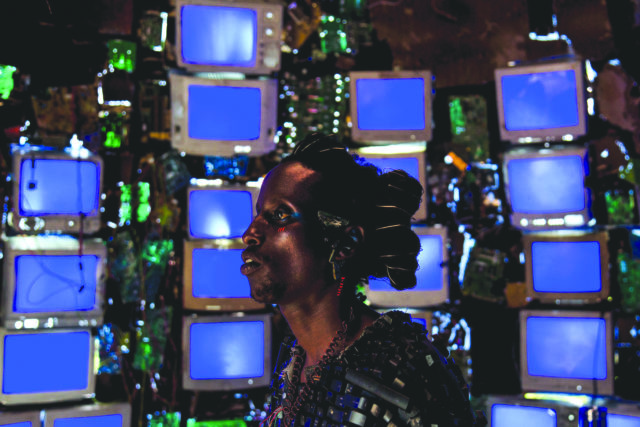 It opens in an African coltan mine. Black bodies dig through the rocks for precious metals. “Metal precious currency,” the narrator intones. “Third and First world currency. Black market currency… That old black-bodied currency.” Men with guns demand the workers dig. Later, a character will draw a parallel between these workers and all workers—past and present, nameless, faceless, personless—with robots. Servants in the purest sense. “All you pay not to see.”

But in Neptune Frost, you pay to see it all, though this is no documentary. Neptune Frost is a kaleidoscopic futuristic musical about a group of hacktivist rebels led by an intersex runaway, a mine escapee and a silent bird floating through the sky. Any relationship to reality is purely intentional.

Writer/director/composer/rapper Saul Williams conceived Neptune Frost first as a graphic novel and musical in 2013, then as the studio album MartyrLoserKing in 2016, and now as a feature film with co-director and cinematographer Anisia Uzeyman. If that sounds like a twisty way to the big screen, it makes perfect sense in Neptune Frost. It’s a movie of many layers: Not all of them stack neatly, but none of them are boring.

Back to those mines: Tekno (Robert Ninteretse) has discovered coltan among the rocks—it’s the base mineral powering your smartphone, computer, tablet, what-have-you. Tekno holds the mineral high in the sky in worship, and one of the guards strikes him dead. Tekno’s brother, Matalusa (Kaya Free), uses this moment to flee the mine and enter the world. That’s where he crosses paths with Neptune (Elvis Ngabo and Cheryl Isheja) and navigates a world that has pushed past ancient and futuristic, technological and organic, male and female. Binary may be the language of computers, but those reductive ones and zeros have no place here.

Indeed, there are five languages spoken in Neptune Frost: Kinyarwanda, Kirundi, Swahili, French and English, each one furthering the plurality Williams and Uzeyman are clearly celebrating. The dialog has the subtlety of a manifesto. The images are as muted as a Day-glo hunter’s jacket.

And Neptune and Matalusa’s band of rebels are being hunted. Specifically by police officers walking around with guns fashioned from animal antlers and wire masks that must do a bang-up job garbling facial recognition programs. It’s unclear how far in the future Neptune Frost is set, but the designs feel like technology has advanced to the point where it’s become organic. Neptune and Matalusa’s rebels incorporate e-waste into every aspect of their clothing, makeup and hair. Matalusa wears a vest of keyboard keys, Neptune has computer chip piercings, and copper wires are woven through just about everyone’s locs. When one revolutionary is injured, another says, simply, “The motherboard’s been damaged.” When an arm is severed, a new one is fashioned from discarded computer parts. All of it is colorful, all of it vibrant.

And all of it is fascinating. Neptune Frost is direct—characters address the camera with defiance—the dialogue doesn’t mince words, and the musical interludes seem to be playing on eternally just off-camera. What a full world, Williams and Uzeyman seem to be saying. A pity to reduce it.

For more movie reviews, tune into After Image Fridays at 3 p.m., on KGNU: 88.5 FM and online at kgnu.org.