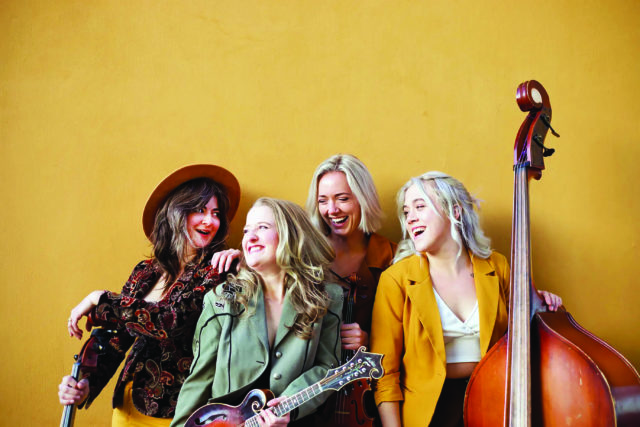 Bonnie Sims, Emma Rose and Eve Panning huddle tight on a couch so they all fit in the Zoom screen. Joy Adams will join soon, because the band needs to work in a rehearsal before they hit the road tonight for the Ogden Music Festival in Utah.

It’s been an astronomical year for the four string players, who combined their talents for the first time in late May 2021 to play a private bluegrass festival in Castle Rock. The women had admired one another for years, each a staple in the Colorado bluegrass scene: Sims, who plays mandolin in Big Richard, has a platinum record under her belt with her Columbia Records-signed Everybody Loves An Outlaw project (with husband Taylor); upright bass player Rose adds her string skills to multiple projects, including beloved local troubadour Daniel Rodriguez’s band; Panning’s fiddle can be heard in the Denver-based five-piece bluegrass outfit The Lonesome Days; and cellist Adams has performed with everyone who’s anyone—Bruce Hornsby, Chick Corea, Nathaniel Rateliff, Sam Bush, Billy Strings and on and on—and recorded on soundtracks for Emmy and Grammy award-winning shows like The Queen’s Gambit and Godless.

With wry senses of humor to match their boundless talent, the women banded together under the tongue-in-cheek moniker Big Richard, peppering social media posts with eggplant emojis just in case there was any question as to what the name implies.

A fan-recorded May 30 performance at MainStage Brewing Company in Lyons (posted on the band’s Facebook page) captures the group’s ineffable charisma: Sims’ rich alto working up to a soul-rending growl, supported melodically by Adams and Rose. Sims’ glasses slide to the tip of her nose as she plays; she works her spectacles back in place as she tosses her head back in joy while her bandmates take turns on blistering solos.

Off stage, the camaraderie between the women is equally undeniable, their charm inescapable: clustered on the couch, Sims, Rose and Panning cut their eyes at each other to laugh at inside jokes, clutch each other’s arms as they talk about their friendship, and turn to one another for confirmation of a detail or to encourage someone else to tell a story. While Adams is absent until the end of the interview, she’s made her feelings clear on Instagram:

“One year with these three hot girls,” she wrote in a May 24 post. “It doesn’t feel like just a year, because for me, actually it was years of waking up at 4:30 a.m. to practice cello for seven hours a day, decades of sifting through symphonies, string quartets, opera pits, universities, teaching jobs, jazz bands, sideman gigs, recording sessions, three degrees, searching for my home in music. I found it. It’s this band with these girls. I just didn’t expect to find my best friends at the same time. I love you three, and thank you for the endless motivation to keep practicing, singing, growing and learning.”

They’ve bonded over music, of course, but also over being women in a male-dominated genre.

“I’ve had a few versions of the same kind of comment,” Panning says. “It’s usually, ‘A woman’s usually just a pretty face on stage, but you can
actually play.’ Or, the more recent version: ‘You’re,
like, really good. Really, really good. I’m not just
saying that because you’re a pretty girl. You’re
actually really good.’”

Sims tells a story of a volunteer at a festival touching the treble clef she has tattooed on her left wrist as he put on her wristband.

“And he (said), ‘Treble clef girl,’ and like, stroked my skin,” Sims says. “He stole a little bit of intimacy and I could share that with (my bandmates) 10 minutes later and kind of vent about it in a way that made me feel better, whereas other people might be like, ‘What are you talking about?’”

But what the group has mostly experienced is unyielding support, from fans and peers, like bluegrass legend Sam Bush, who invited Big Richard to open a show in Fort Collins in February. The women have found themselves on practically every bluegrass festival lineup this side of the Mississippi, culminating, unsurprisingly, with a Saturday slot at Telluride on June 18.
In December they’ll take the Big Richard energy international, playing the Strings and Sol festival in Puerto Morelos
in Mexico.

For those unfamiliar with the band, whet your whistle for a live performance by searching out Big Richard’s recorded covers, like Billie Eilish’s “Good Girls Go to Hell,” or “Creep” by Radiohead. But fan favorites tend toward bluegrass standards like “The Dreadful Wind and Rain,” which Big Richard often performs a capella or with only minimal fiddle from Panning.

With three singles available on Spotify, the band is gearing up to record its first album. In other words, there’s no plan to slow down.

“As a woman playing in this genre, there are these expectations, sometimes, of how you’re supposed to act,” Rose says. “I’ve played in a lot of bands where the dress code is super harsh. I can’t say certain things at the gig. I mean, because this genre of music that we play is particularly sexist…”

“Yeah, exactly,” Rose says. “So it’s super freeing and beautiful to just be who I am in a band. I say crass shit sometimes, and I just said shit, and sometimes I like to cuss. And I don’t want to wear a bra. And that’s just who I am as a person. And I happen to inhabit a female body. But it’s cool to be able to do whatever with these women.”