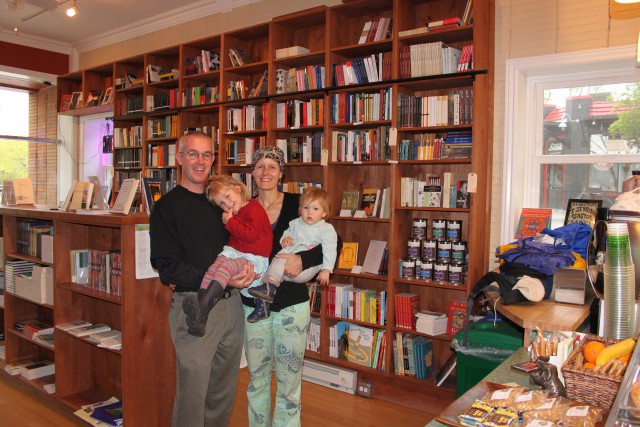 One year ago, AJ (Andrew) Carrillo was there waiting for Innisfree Poetry to open its doors. He had watched the storefronts at 13th and Pennsylvania avenues rotate over the years while he studied humanities at the University of Colorado. When newspaper went over the windows and a sign said “coming soon” for a poetry store, he was ready for it, and when Innisfree Poetry opened on Dec. 10, 2010, he was the first customer.

He and other local poets say they’ve enjoyed watching the all-poetry bookstore flourish over the past year, filling its shelves with equal parts staff choices and community recommendations, increasing the number of employees from two to seven, adding open mic nights, and opening an expansion in April.

“It’s nice that there’s been a community that’s been able to develop there around poetry,” Carrillo says. “It’s just kind of grown and we’ve all kind of grown with it.”

“It’s been an amazing first year,” says Brian Buckley, co-proprietor of the store with his wife, Kate Hunter. “The first thing that comes to mind is the community.”

For their business approach, they’ve taken, appropriately, a metaphor from a poem:

Robert Frost’s limbs bending under the frost in “Birches.” They want the branch to surprise them with where it goes when it snaps back up, Buckley says.

“I think we’ll always have stuff to figure out in the day of ebooks and Kindle,” he says. “But we hear people still want to hold a poetry book in their hands, want the texture in the pages.”

Innisfree is one of only three all-poetry bookstores in the country and opened in an era of booming ebook sales and closing bookstores.

“It’s daunting, but it was exciting to do a double underdog thing,” Buckley says. “It’s a good reason to wake up with new ideas every morning.”

Some of those ideas have come from members of the Innisfree Poetry community, such as the idea for a weekly open mic night, which Naropa writing and poetics M.F.A. candidate Troy Suben initiated. Suben, a lifelong poet, had already decided Boulder needed another poetry open mic.

“When the bookstore opened, it was like the perfect opportunity to do it here,” Suben says. “It provides a safe space for people to read, to be who they are. … It’s really warm in there, it’s really friendly and people are really kind and supportive.”

The open mics have been drawing larger crowds over the last few months, a fact that both Carrillo and Suben connect, loosely, to the Occupy movement.

“When you have things like Occupy Wall Street going on and you have a lot of people who don’t necessarily have a cohesive message, you want people who are going to paint that experience and communicate in a potent way,” Carrillo says. “I think that’s one of the major aspects of value of poetry in society — we help people solidify their own ideas.”

For Innisfree’s one-year birthday party celebration on Dec. 10, the microphone will be turned on at 7 a.m. The day will include a children’s poetry hour, music by On the Fence and open readings of “Poems that Matter,” before switching to a fundraiser for the Normalizing Homebirth Project.

In the coming year, Buckley says they’ll be looking to do more programs to include students and perhaps explore the whispers about an Innisfree printing press.

Buckley and Hunter are looking forward to that winter lull on the Hill, Buckley says. “We’re completely ready to slow down, breathe, reflect.”