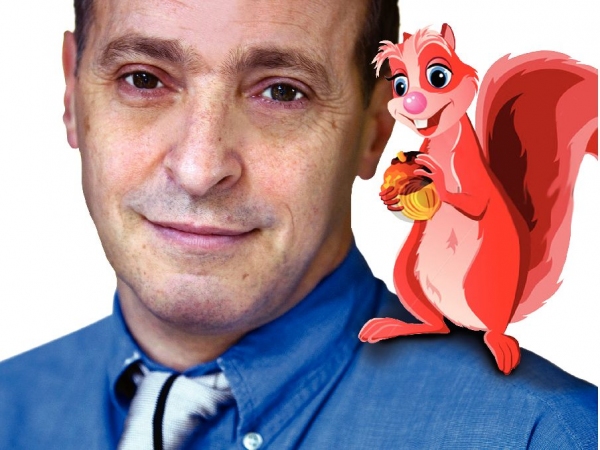 David Sedaris has an odd relationship with animals. By his own admission he has no use for them in close quarters, but is infatuated with the raw and often ugly lives of creatures in their native habitats.

“I’m not a pet person,” says Sedaris, on the phone from his home in France, where he lives with his boyfriend. “Like, walking a dog I don’t like, but watching nature programs I do.”

The author, known widely for his autobiographical and sometimes embarrassing accounts of his family life growing up in rural North Carolina and his subsequent years spent trying to make it as a writer while cleaning apartments in New York City, has penned his first bestiary. Squirrel Seeks Chipmunk is a collection of fables in which animals are imbued with human characteristics to hilarious and often gruesome ends. The book puts the brutality of the animal kingdom on display while simultaneously forcing the reader to examine his own branch of the evolutionary tree. It’s often hard to tell which is worse, the lives of dumb animals or the way humans live with one another.

“Like seven years ago, someone gave me a tape — I love books on tape — and it was these South African folk tales,” Sedaris says. “And it’s always about a girl who married
a lion and a cheetah that was tricked by a mongoose or something and I
thought, ‘I can do better than this.’ So I just started writing my own.”

Sedaris soon discovered writing about animals with human characteristics can be quite complicated. One story from Squirrel Seeks Chipmunk follows
the lives of a married dog couple and the wife’s lover who lives across
the street. She pines for her boyfriend daily but is locked away in her
owner’s home, helpless to control her own destiny, a decidedly un-human
characteristic.

“Actually
when you think about it … those wouldn’t really be people because
people can leave the house whenever they want to,” Sedaris says. “They’d
be more like slaves who just never thought of freedom as an option. But
if you were to write a story about a couple like that then you would
think ‘Well why doesn’t she just go across the street and see her
boyfriend more often?’ But they can’t. They are at the mercy of their
master. So, there’s something that kind of keeps them, not in all cases
but often, something that keeps them animals.”

Using animals as characters, Sedaris admits, does offer a freedom not provided by human subjects.

“I
would lose patience if someone told me a story about humans and they
used another name,” Sedaris says. “I mean, like, if someone were to
write a short story
and they were to say, ‘There was a knock at the door and the man
answered it. It was a woman on the other side. ‘What are you doing
here?’ she said. ‘Well it’s my apartment,’ he said. I’d be like ‘OK, can
we have a name here? Can someone tell me what these people look like?’
But everybody knows what a chipmunk looks like.”

Sedaris
says he also wanted the animals to start off unblemished in the eye of
the reader, so no prejudgment could be made about who they are and what
their intentions might be.

“I
didn’t want to give the animals names because even that is a step
towards judging them,” Sedaris says. “Like sometimes people say they’ve
got a pet; like, they’ll say ‘Oh, my cat Tinkerbell.’ And all of a
sudden I think ‘I hate Tinkerbell. I hate this cat.’ Or they’ll say
‘I’ve had Brian for three years,’ and I’ll think ‘now we’re talking.
Brian’s a great name for a cat.’ So you couldn’t tell me the name. I
need to judge. So I didn’t want any of these animals to have names. I
guess I just wanted to kind of create this world but not name it or
anything … sort of create this world where they could all inhabit.”

The
lack of names works fine for readers, although he admits it sometimes
gave the voice actors of the audio book version a little trouble.

“There
was a little confusion,” Sedaris says. “When [the actors] were reading
the book on tape, at one point one of the [actors] said, ‘Which Goddamn
bear is talking!?’” While mainly known for his writing, Sedaris’ live
performances have grown in popularity over the years, to the point where
they nearly overshadow his written work. Reading Sedaris is one thing,
but hearing him read it — with the inflections, pauses and intonations
he intended — draws listeners one step closer to the world Sedaris is
trying to create.

“I
love reading out loud, and I love being in front of an audience,” says
Sedaris, who adds he always looks forward to book and lecture tours.
This one began on Oct. 8 and will take him to 35 cities in 35 days.
After that he will take a five-day break, then head out on a three-week
book tour for Squirrel Seeks Chipmunk.

“People
say, ‘Oh my God, you’re going to that many cities? It’s going to be
awful.’ It’s all I ever wanted. It’s like the laziest form of show
business there is,” Sedaris says.

The difference between the written word and an oral story is the biggest reason Sedaris is so fond of audio books.

Lolita! I’d always wanted to say I’d read Lolita, but
I didn’t want to actually have to do it. Jeremy Irons read it to me and
I can honestly say it’s one of the best books I ever … read. And I
don’t think I would have read it.”

Sedaris expects nothing more of his fans, and understands the disadvantages of having to actually sit down and crack a book.

“Sometimes
people will be apologetic and they’ll say ‘I didn’t read your book but I
listened to it,’ and it’s like, don’t be ashamed of that,” says
Sedaris. “But I see the difference like this: when I’m reading a book, I
enter the world of the book. But when I listen to a book it comes into
my world. Because I never remember where I am when I read a book. But I
always remember where I was when I listened to a book. And maybe some
authors would feel like ‘No I’m sorry, I don’t want that. I want you to
come into my world. I want you to read the book with your eyes. I want
you to come up with the voice.’ I don’t really care because I have a lot
of stuff to do. I like to iron my shirts and I can’t read and iron at
the same time. I’ve got shirts to iron! I need audio books!”