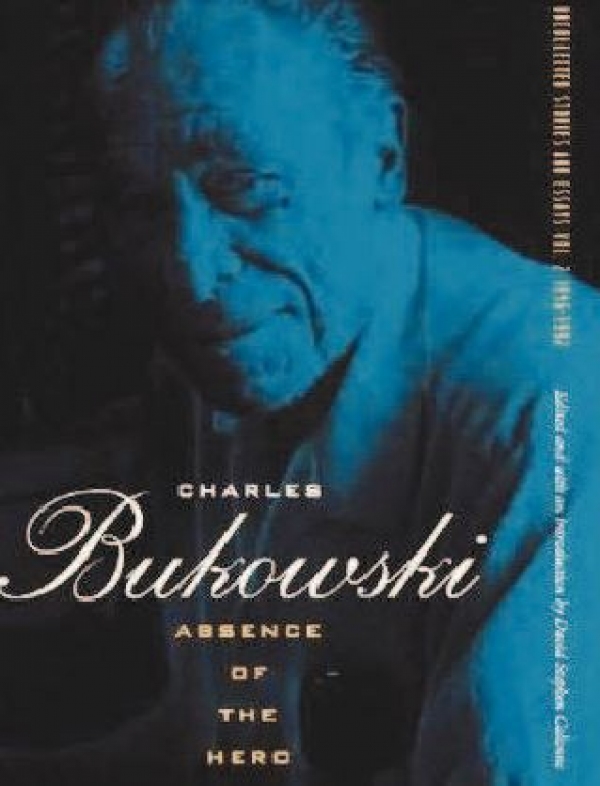 Absence of the Hero, Vol. 2, the latest book of uncollected Charles Bukowski writings, begins with “The Reason Behind Reason,” a poignant tale of a professional baseball player who has somewhat of a psychotic break while playing the outfield. In the middle of a game, the centerfielder looks around at his teammates, the sky and the overall spectacle he’s an essential part of; despite being confused and bewildered, he catches a fly ball, and then runs with his teammates to the dugout after the inning’s final out.

In his next at-bat, the puzzled player hits a “screamer” off the outfield wall but fails to leave the batter’s box, standing curiously still until the ball is thrown in to first base — at which point he walks to the locker room to face the press as the story ends.

“Bukowski is becoming a household name,” says Nate Jordon, head of Boulder’s burgeoning Monkey Puzzle Press. “It’s as if Bukowski is finally being discovered. It’s almost ironic because even at the height of his fame, Bukowski was still an underground writer — he was still below the public radar — but, to those who knew of him, he was a genius.”

Henry Charles Bukowski (1920-1994) was well into his 50s when he started to enjoy widespread success as a writer. Since his rise to international fame in the 1980s, Bukowski’s short stories, poems, essays and letters have been translated into numerous languages, been made into major motion pictures and helped several publishers make a boatload of money. A household name, yes, but the majority of Bukowski’s fans utilize his edgy writing — which “voiced the realities of the rejected,” says Jordon — as a rite of passage and move on.

Bukowski’s characters, who are virtually always on the verge of either punching each other or fornicating, hang on to life by holding on to each other, if only for one night or a couple of months. They treat each other horribly, with Bukowski’s selfstyled character Henry Chinaski usually taking the prize for worst behaved, and are usually either drunk or hung-over. But unlike Exit to Brooklyn and other erotically charged American tales of urban horror and desperation, many of Bukowski’s short stories actually leave one with a warm glow, whether from reluctant but real love, brilliant delineation of sociological phenomena in America or, once in a while, juicy science fiction.

“Bukowski vehemently denied being a part of the Beat Generation and many times expressed a loathing of such associations,” Jordon says.

But it’s more complicated than that. In Bukowski’s entire sprawling catalog, references to the Beats are almost nonexistent, but Absence of the Hero, Vol. 2 provides somewhat of a breakthrough with an unearthed Bukowski review of Allen Ginsberg’s Empty Mirror (1961).

“He’s better to have around than not to have around,” Bukowski says of Ginsberg, which is one of the nicest things the Los Angeles writer is known to have said about the Beats. “I think that Ginsberg belongs somewhere,” he continues, “and that without his coming through, none of us would be writing as well as we are doing now, which is not well enough, but we hang on.”

Bukowski, who egotistically describes himself as “one-half Hemingway and one-half Bogart” at one point in Absence of the Hero, also had a lot in common with Jack Kerouac. Although somehow Bukowski was able to endlessly abuse alcohol and live into his 70s, while Kerouac died in his 40s of alcoholism-related physical trauma, both strived toward what Bukowski calls here “the true line devoid of ornament.”

At one point in Absence of the Hero, Gregory Corso and Bukowski cross paths in New Mexico. The inimitable author of “Marriage” proceeds to repeatedly tell Bukowski, “I am your peer,” as if the little Italian eccentric was convinced that Bukowski had an inferiority complex for never being part of a major literary movement, let alone the major literary movement of his time. Bukowski and Corso proceed to drink together amicably in an Albuquerque bar, and the reader wonders who dreamt up the Bukowski/Beat controversy in the first place.

Still, as a graduate of the Jack Kerouac School of Disembodied Poetics at Naropa University in Boulder — co-founded by Ginsberg almost 40 years ago — I also closed Absence of the Hero, Vol. 2 wondering why the name Charles Bukowski never came up in two years of classes.

“With Naropa and the Beat lineage there,” says Jordon, a Kerouac School graduate, “I think there’s a conscious decision to delineate Bukowski from the Beats. Of course, I could be wrong. Maybe someone should bring it up.”