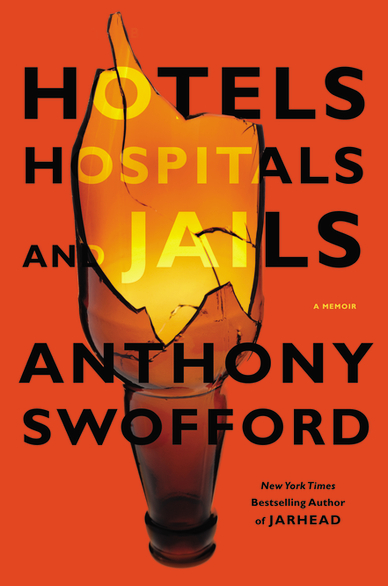 It’s difficult to imagine that Anthony Swofford, who once had sex with a girl in the same room as his dying brother and dined on greasy Waffle House food with a crack dealer and a couple of prostitutes, could become such a family man.

In his new book, Hotels, Hospitals and Jails, a memoir taking place after the success of his New York Times bestselling military memoir, Jarhead, Swofford finds himself at an impasse in his life. Despite the slew of women he sleeps with on a regular basis — oftentimes cheating on multiple “girlfriends” in the same night — and living in a plush Manhattan apartment with a window view of jutting skyscrapers and seemingly endless possibilities, Swofford quickly turns to drugs and drinking as he deals with his family issues and the toll of his war experience.

“I certainly wasn’t proud of that behavior,” Swofford says. “I was a 30-year-old ex-Marine in New York City with money and time on my hands, and I was also recently divorced. I wasn’t married to any of these women. I chalked it up to all is fair is love and war.”

Without the backdrop of war taking center stage, Hotels, Hospitals and Jails is a more intimate memoir, focusing on the dichotomy between Swofford and his estranged father. A Vietnam veteran once exposed to Agent Orange and now suffering from chronic obstructive pulmonary disease (COPD) from years of smoking cigarettes, Swofford’s father, John, is perceived as being less of a father and more of a military buddy to his son.

“My father, at some point, wanted to become my pal and my buddy and take me and my friends to strip clubs and hang out,” Swofford says. “What I wanted was a father — I could hang out with my buddies at bars and drink beers on the porch — I didn’t really want to do that with my father. He didn’t recognize that.”

Swofford says part of joining the Marine Corps was to get a better understanding of his father.

“I joined the Marine Corps in order to figure out something about my father and figure out this mystery, which was his military service and especially his service in war. I needed to get close to the fire in order to understand him.”

Swofford’s memoir  goes back and forth between past and present experiences with his father: In one scene, his father grabs him by the back of the neck as a small boy to show him the dog feces he forgot to pick up on the lawn. In another scene, Swofford shakes with rage as an adult as his father makes racist remarks while boasting of all the women he has slept with (referring to himself as a “pussy hunter” to his son) and encouraging Anthony to “let the venom out” that he knows his son feels for him.

That venom is best seen in the chapter “Letter from My Father,” where Swofford takes his reader on a long, sometimes self-indulgent tirade as he publishes once-private letters his father sent him and responds with overly scathing defenses that quickly become a one-sided “he said/he said” battle.

Now, as Swofford waits in a San Francisco hotel to pick his father up from the airport before a book reading of Hotels, he wonders what his father will think of his latest memoir.

“I’m a little nervous,” he says. “I love my father, and I would hate for a book that I’ve written to get in the way of this reconciliation we’ve made after some tough years.”

Part of those tough years involved the death of his older brother Jeff, who passed away from cancer and whose death provides some of the more emotionally significant pieces of writing in Swofford’s book, giving more context to what caused the disconnect between father and son to grow.

Swofford at times treats his memoir as more of a therapeutic diary, spilling a jumbled mix of emotions onto paper that might be less riveting to readers had he not found success in Jarhead. As he prepares for one of his first public book readings, he considers how audiences will react.

“It’s been a while since I’ve read from a memoir,” he says. “When I was writing the book, my head was kind of in the sand, and I was working away and not thinking about the moment when I’d be standing in a room with 50 people and reading some kind of dark, and not always attractive, things about myself.”

In one of the more self-aware moments of the memoir, Swofford visits disabled military veterans to sign copies of Jarhead and attend a dinner with them, feeling out of place around people who have sacrificed limbs in service of their country.

Reflecting back on his military experience, Swofford discussed some of the hardships veterans can face when returning to civilian life.

“It takes some time to re-enter and to feel safe and to come down from the high and the hyper-vigilance that is necessary in combat,” he says. “Even if you don’t like the guy — you can trust him in the military, and you have the trust of others, and that’s not always true out in the civilian world. And I find that that’s very confusing for veterans.”

Despite the highs and lows of his journey, Swofford is now happily married and a father of a 9-month-old daughter. He admits it’s an outcome he had hoped for but could never truly picture.

“When I was alone, I longed for it,” he says. “But I could never see it clearly enough to know that it might happen for me.”

Now that it has, Swofford says it’s helped him understand his own father better.

“It allows me to see him as a more complicated man than I might have in the past,” he says. “I think about fatherhood much differently than I imagine my father ever did. I think of it as both a privilege to be the father to this beautiful little baby and also a journey in that every day I need to wake up and do what I can to be the best father I can be that day.”

For now, Swofford says he’s done with memoirs, but would still like to continue on the nonfiction track.

“I want to find a good topic or subject that I can dig into for a while and write a compelling nonfiction narrative,” he says The future for Swofford seems less likely to hold hotels, hospitals and jails, as he optimistically talks about his plans with his father for the day.

“I’m going to pick him up and we’re gonna go for a drive,” he says. “He’s gonna hear me read from my book in a Sacramento book store, and we’ll probably have some pizza afterwards and hang out with some friends.”