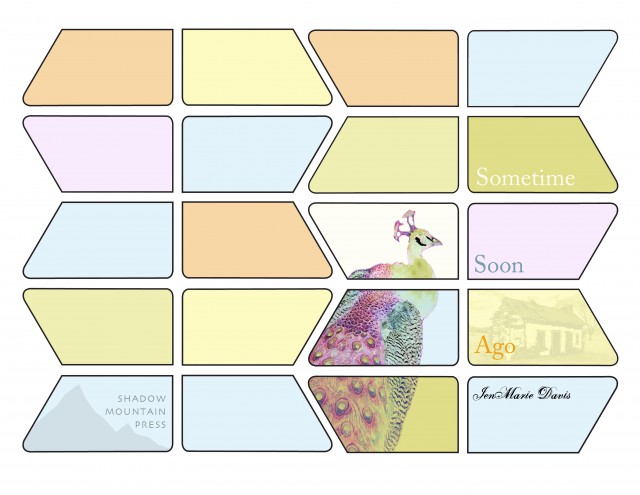 There must be something in the mountain air. More and more young writers are coming to Boulder from far-flung American locales, unlearning who they thought they were as artists and people, and then (usually) moving on, spreading the cool, creative calm of Colorado elsewhere.

Naropa University graduate Jen Marie Davis, author of the beautiful new hand-stitched collection Sometime Soon Ago (Shadow Mountain Press, Golden), is a great example. Davis, an Ohio native, initially thought of herself as primarily a prose writer — and then primarily a self-chronicling poet-essayist when she first began dabbling in poetry. Davis’ time in Boulder, she says, taught her to slow down and not only appreciate but also chronicle what she calls life’s “white noise”: ordinary details we tend to overlook as unimportant but actually come to define our experience over time.

These days, Davis lives in Santa Fe, N.M., where she works as a book artist, co-edits Fact-Simile Press and engages in fairly complex poetic exercises that bloom out of the intense passion and focus she affords her craft. Sometime Soon Ago, however, presents both Davis’ debut solo effort and a time when she was just getting acquainted with her voice as a poet.

In brief moments such as “After Taos,” which follows below, Davis deftly and pleasingly opens the reader’s imagination vis a vis place, time and subject. Instead of pointing us toward a concrete setting with a fixed meaning, Davis succeeds at conveying a feeling, and a range of possibilities.

What separated the morning from noon was not the stretch;

the well-placed promenade and song between drags of riverbed.

The short, succinct and unlocked poems of Sometime Soon Ago include references to New York cafes, dance classes, ornithology and the day-to-day struggle to keep a relationship vibrant. These passing flashes of a seemingly normal life stimulate the imaginations of patient, curious readers and suggest fluid and tantalizing implications that grow with each reading.

How Davis plays with tense, shape and sly pronouns — the word “she” is painted all over the proverbial walls of this book — nixed my preconceptions about poetry and meaning as I read Sometime Soon Ago last week on an airplane from New Mexico to Maine. In a recent chat, the poet herself told Boulder Weekly the profound elusiveness I discovered in her poems was no accident.

Boulder Weekly: It was surprising, after repeatedly hearing you read your more complex and abstract work in Boulder a few years ago — which I assumed was your older work — to read these charming Frank O’Hara-esque koans.

Jen Marie Davis: These were actually the very first poems I’d ever seriously written. I had been interested in the compression of time and memory and had written about it in longer [prose] forms. The synchroneity of form and content is very important to me; it seemed wrong to write about compression in a long form — I wanted to successfully communicate an idea or multiple ideas in as few simple lines as possible. At this time, I hadn’t read much poetry, either; certainly not Frank O’Hara — I’m glad to say that I have since. So I was moving from prose — to be more specific literary journalism/creative nonfiction — to these poems, which actually began as the seeds of essays. So, instead of developing these “seeds” into essays, I decided to see if the ideas or themes translated simply in just a few lines. Eventually, with more reading, writing and understanding poetry and language, I was able to move from these to what you referred to as my previous work.

BW: How did your time in Boulder affect you as a person and as a writer?

JMD: Before I moved to Boulder, I had the mindset that unless I was working — writing, reading, researching — I was not being productive as a writer. My time in Boulder slowed me down; I learned contemplative practices and mindful behavior. Noticing what I noticed and why I noticed became just as, if not more, productive for me as “working” and began to inform my writing. The poems in this chapbook all reflect what I would call short “non-moments” — the kind of things that regularly happen to a person or the thoughts that may cross a person’s mind that tend to go unnoticed. The “white noise” of life. Being in Boulder taught me how to be present and listen to and engage with the “white noise.”

BW: This writing seems much different from what outsiders generally consider the stereotypically free form and messy poetry Naropa writers produce. How did you transcend that style?

JMD: I’m not really sure what “stereotypical Naropa poetry” is. During the time I spent at Naropa, I encountered such a variety of aesthetics. I remember one poetry class in which no one was writing in a similar manner, everyone had different concerns, but everyone responded respectfully yet critically despite the differences. That’s actually one of the reasons I really love Naropa and is one of the most important skills that I learned there — how to read and respond to a variety of work. If my work is different from typically Naropa poetry, I would owe it to a background in magazine journalism/creative nonfiction. I read a lot of MFK Fisher, John McPhee, Annie Dillard, Anne Carson and philosophy. [Before coming to Boulder] I had never read On the Road, any Ginsberg, really no Beats at all.

BW: One of the most striking moments in Sometime Soon Ago is an opening line that reads, “She interrupts life to write it down.” Is the overwhelming urge to write ever a curse?

JMD: The curse of forgetting what I wanted to write down always outweighs the curse of writing.

JMD: “She” is an eye, a lens and a position. After taking a lot of workshops in the personal essay and reading a lot of “I”s, I became bored with close personal experience, which led me to become interested in the gap that exists between a writer and third-person narration. Can I write essays in a third-person narration? What shift in perspective happens with the change of position?

BW: How did this project come about?

JMD: [Shadow Mountain Press publisher] Travis Cebula was familiar with my work and asked if I would submit a manuscript. I wrote most of these poems two and half years ago and knew that Travis had read and enjoyed them, so I thought that they would be a good fit. I’m very pleased with the book. Marie Larson, a very talented poet and artist, designed the cover, which I think resonates very well with the contents. My biggest concern when I make a book through my press [Fact-Simile] is that the form resonates with the work. With Marie’s cover, the artisan paper and hand-stitched construction of the book, I think Travis achieved that aim.