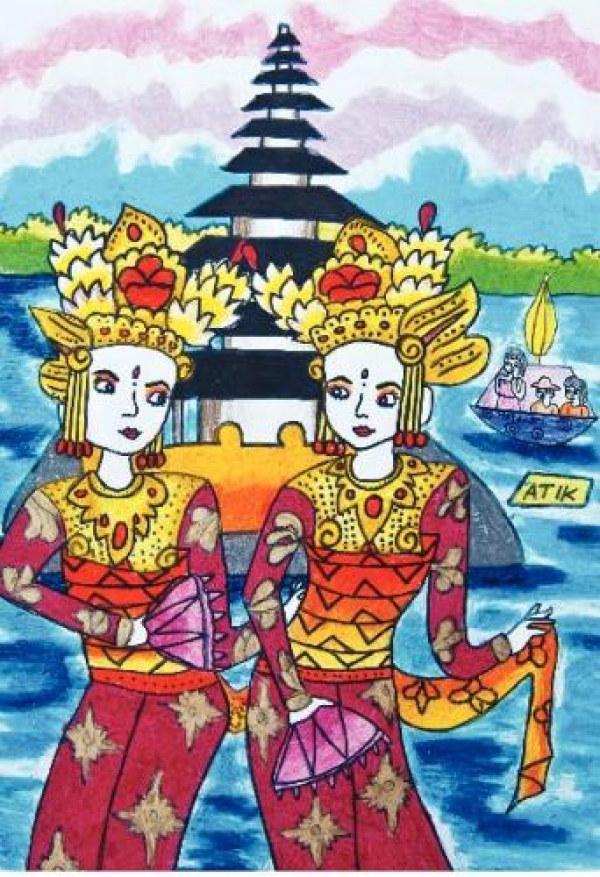 Flying to Bali this past September for a semester of for-credit study abroad, 24-year-old Naropa University student Jacqueline Tardie had no idea what to expect. A senior with dual majors in art and religion, Tardie didn’t know the Bahasa Indonesia language or what she’d be working on for her final required independent-study project. She also didn’t know the bathroom situation would be so different from what she’s used to in America.

After two months in Bali, Tardie heard about the Seniwati Gallery — a school and gallery for female artists ages 6 to 16 — and almost immediately knew she’d found her project.

“I looked back at my journal from the first week I was there and realized I had written about working with kids and books and art,” she says. “I didn’t really think about it that much, and then it happened. I heard about this gallery in Ubud and I went and met the women who worked there. They held these art classes for young girls, and I was like, ‘This is perfect. I want to work here.’” Fluent in Bahasa Indonesia by the end of her stay in Bali, Tardie decided to make a beautiful full-color 30-page collection of art and stories — called Seniwati Sanggar Muda, all the work of the young women at the Seniwati Gallery — and sell it to make money to help the school keep going. She was able to raise enough money to have the book printed, and all of the proceeds are going back to the school. Book sales will help at least 300 girls afford to study at the Seniwati Gallery.

Tardie printed 1,000 copies of the book (buy the book at jackandbali.wordpress.com or by contacting Tardie at jacquelinelate@gmail.com) and brought 400 copies back to Boulder. The young artists’ vibrant works in oil pastel and colored pencil depict wildly vivid mountains, flowers, gods and goddesses, birds and smiling children. The accompanying stories and descriptions, written by the girls and translated by Tardie, melt the heart and — like the book’s wonderful paintings and drawings — make one marvel at the talent of these Balinese artists.

Surprisingly, it cost Tardie about the same amount of money to spend an inspiring semester in Bali as it would’ve for her to remain at Naropa, the school from which she’ll be graduating in May. And the natural juxtaposition of art and spirituality in Balinese culture was a perfect fit for her interests.

“It was my intent to study art and religion,” Tardie says, “but when I asked these girls to draw something I wanted it to be a free expression of what was important to them, for them to tell their story as artists and young women in Bali. I just wanted it to come out, and in that you have explanations of religious ceremonies.

“I think that art is often expressed on such a deep subconscious level, and religious or spiritual experiences happen on that same level.”

The head of the household where Tardie was staying in Bali — Ibu Surini, a woman in her early 60s — was killed in a motorbike accident near the end of Tardie’s semester abroad, and the funeral turned out to be one of the most moving events the student-artist has experienced.

“We brought her ashes to the sea, and it was the most beautiful thing to be there,” she says. “The ocean has always been a very cleansing place for me, and thinking of how beautiful it was for her to be returned to the ocean is so powerful. Also, experiencing death there is so incredibly different. There’s room for mourning, but it’s such a beautiful thing. It’s not scary. It’s really wonderful to be returned to that cycle of life. That was the most amazing thing — I was happy for her. I loved her and I was sad she wasn’t here anymore, but there was no fear because I knew she was well. There was a sadness, for sure, but she’s not gone.”

In the past 70 years, Bali has struggled to free itself from Dutch and Japanese rule, not to mention the “puppet master” president Suharto, but with creative institutions such as the Seniwati Gallery — and the help of passionate outsiders such as Tardie — the “Glorious Bali Island” of almost 4 million people is now revealing its singular beauty to the world.

As 12-year-old Ni Putu Atik Purdhana writes in Senawati Sanggar Muda, “The Balinese are proud to see their own culture become famous. I am also proud.”