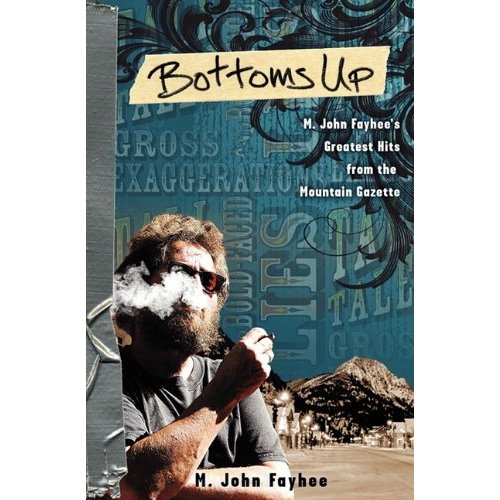 When I worked with him in the 1990s at the Summit Daily News in Frisco, he was a already a minor legend. His name graced the masthead of Backpacker magazine, he was publishing books with preeminent Colorado photographer John Fielder, and he was rubbing elbows with Hunter S. Thompson’s circle of friends.

Fayhee, whose gruff and scruffy exterior are paired with wit and a healthy dose of sarcasm and cynicism, was known for having a bit of a wild streak. At times, his adventures were traced to one of the local watering holes, at others, to one of the nearby 14ers.

So it was only appropriate when, in 2000, Fayhee was part of the group that resurrected the Mountain Gazette, another grizzled classic. MG, a Rocky Mountain platform for a host of pre-eminent outdoor writers and photographers, from Edward Abbey to Galen Rowell, published 77 issues from 1972 to 1979 before succumbing to financial problems. Fayhee helped publish issue number 78 more than two decades later, and became the publication’s editor.

Now you can read a collection of Fayhee’s favorite MG columns in Bottoms Up: M. John Fayhee’s Greatest Hits from the Mountain Gazette (Round Mountain Publishing, 2010).
To give you an idea of what you’re in for, the warning on the first page declares that the tome is rated R because it contains a list of unsavory items, including bad language, “unpatriotic, anti-authoritarian sentiments” and “tippling, often to excess, with unsavory characters,” for example. The first letters of the entire list of ingredients spell out the word “bullshit.”
Fayhee’s tales are sometimes rambling accounts of a life lived to the fullest. He crafts his language in a way that drives you to a lengthy sentence’s conclusion with unconventional twists and clever turns of phrase.

In one early passage about trekking the Appalachian Trail, he writes, “Though Kris and Brian had planned to complete the entire AT in one fell swoop, their hike fell apart in Connecticut when the third member of their team took a nasty spill on a wet single-strand bridge and busted up a high percentage of his ribs, which used their newfound freedom to make the direct acquaintance of his spleen and liver.”

The following is how he begins another column:

“The first time I ever visited Paul & Jerry’s Saloon in Jerome, Arizona, I was suffering from a nasty case of early fall, high-desert hay fever, and, thus, entered the bar enjoying the disorienting effects of a hefty dose of my favorite itchy-eye, runny nose medicine: a three-times dosage of one of those brightly colored, over-the-counter products that now can be sold only under the most intense video surveillance, complemented by some additional substances that, shall we say, do not yet have FDA approval, though I will add that, one day soon, The Revolution will come, and it will rectify such inexcusable and unenlightened bureaucratic oversights.”

Fayhee’s style is self-deprecating yet defiant — you picture him extending his middle finger to the forces that have turned some of his beloved, funky mountain towns into glitzy resorts. But he doesn’t limit himself to backcountry Colorado experiences. He devotes one column to a discussion of the rivers in his life, from his grandmother’s Thames in England to the Gila River in southwest New Mexico, where he now resides. There are treatises on the interesting things served from jars in bars, accidentally dropping a Clif Bar on Jon Krakauer’s head while rock climbing and the effect that the John Denver song “Rocky Mountain High” had on the influx of people to our fair state.

But it is backpacking in the Rocky Mountains that is clearly Fayhee’s passion and, when it comes to writing, his strongest subject matter. Once you get used to his sometimes self-serving, meandering style, you begin to appreciate his art form. In many cases, his tales are like mountain trails.

After all, as we often forget while on a hike, sometimes it is the trip itself — the birds, the brook, the flowers — and not the ultimate destination that is most enjoyable. And yet, as in the examples above, if you can make it to the end of his sentences, sometimes there is a really nice view.