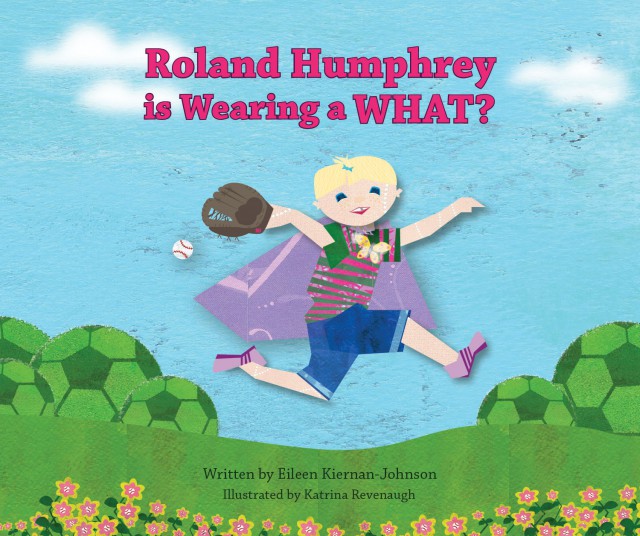 In grade school letters at the top of a piece of printer paper, 6-year-old Ronan carefully spells out the words “Boys” and “Girls.” Using the couch’s ottoman as his desk, he kneels on the floor near his mother, Eileen Kiernan-Johnson, who discusses her self-published children’s book in their Boulder home. Though an “s” may be backwards here or there, it’s clear that the kindergartner isn’t just doodling; he’s adding to our conversation.

Coyly keeping his intent a surprise, he whispers a question in his mom’s ear.

Ronan returns to the task of spelling correctly, his face firm with concentration. Finally happy with his work, he waves the paper to get his mom’s attention and then proudly holds it up for me. “Pink” is written not only in the “Girls” column, but in the “Boys” column as well.

“Ronan, I love that, pink under both,” Kiernan-Johnson says, happily surprised by her son’s initiative. “We’ve talked about what things some people think belong to girls and belong to boys, but we haven’t done this exercise before.”

Like the main character in his mom’s book, Roland Humphrey is Wearing a WHAT?, Ronan loves butterflies, flowers and the color pink. He identifies as a boy, but some of his interests stretch beyond what is traditionally acceptable for his gender. Since showing an interest in dress-up a few years ago, Kiernan-Johnson says clothing has become an important form of expression for Ronan.

“Initially we tried to steer him to more boyish things that had color and flair. We got him really cute neckties and stripy jackets, some things that had more interesting fabrics,” Kiernan-Johnson says. “But he pressed forward with each step. He started wearing T-shirts around his waist like a skirt. And when he got to pick things on his own, he picked things that were more girly.”

Ronan is an avid reader, and loves everything from fairytales to books about spiders. But it wasn’t until recently that Kiernan-Johnson noticed something was missing from his bedtime stories. While books often depict girls playing sports or wearing pants instead of skirts, tales of gender-bending boys were sparse.

“Last year we were looking around for books where there were little boys who enjoyed sparkles and rainbows and dresses and were sort of the male analog of the tomboy,” Kiernan Johnson says. “There just wasn’t a lot out there.”

Roland Humphrey is Wearing a WHAT? not only gives Ronan a character like him, but also challenges gender norms and promotes ideas of acceptance. When Kiernan-Johnson began explaining the challenge of writing the book, Ronan perks up from his list, which now includes “polka dots,” “ostrich” and “stars” — in both columns.

“[Writing] would be a lot of work,” Ronan says. “And the biggest challenge was getting the words right.”

“[My Princess Boy] does a beautiful job of showing how hurtful it could be for the little boy and for his mom and family when people say unkind things,” Kiernan-Johnson says. “With my book I wanted to raise questions of why these rules are in place and to write something a little more playful. I think often this subject is so serious, but there is room for levity and pointing out the absurdity of these rules.”

In the story, Roland’s choice to wear pink to school leads other kids to point out that he broke the “color rules” for boys. This attitude from others was a concern Kiernan-Johnson and her husband had for Ronan’s move to kindergarten. Over the years she and her husband have read articles, met with a play therapist and talked with Ronan’s principal and teacher to understand how to best support him. She says they have also practiced what he should say in case confusion leads to cruel words from others.

“We wanted him to say whatever was comfortable,” Kiernan-Johnson says. “But one of the things we practiced if someone said, ‘Why are you wearing girl clothes?’ was just, ‘Because I like them.’ That’s the truth and you can leave it at that.”

So far, Kiernan-Johnson says the community has been overwhelmingly supportive, and Ronan’s teacher and other teachers at his school have read Roland Humphrey is Wearing a WHAT? in their classrooms. As soon as they received their first 1,000 copies, Kiernan-Johnson says Ronan was eager to share the story with his friends and their families.

“Ronan filled up his suitcase, and he brought one for each kid in his class the next day,” Kiernan-Johnson says. “We got tons of feedback from other parents. A lot of people told us that it sparked really good discussions with their kids. … “And I think kids at Ronan’s school are like ‘Oh, OK, Ronan likes girl things, next thing, move on.’ It’s really been a non-issue.”