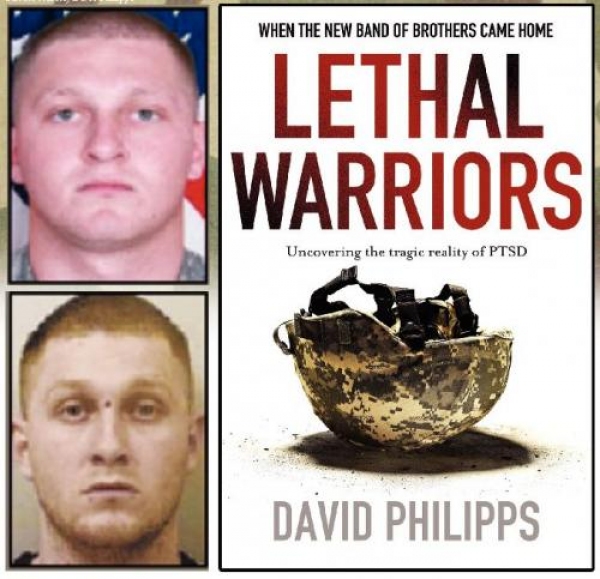 The murderers whose story Colorado Springs journalist David Philipps tells in his new book, Lethal Warriors, are hardly a sympathetic bunch. As Philipps writes it, they murdered their victims — servicemen, innocent strangers, ex-lovers — at the slightest provocation, or with none at all. Some were murdered with precise, cold-blooded professionalism, others with savage force.

Yet what ties these murders together, and the reason why they’re important, is that all the perpetrators served in the same infantry battalion in the most brutal parts of Iraq during the bloodiest times of the war, and upon returning to the States they slipped through the cracks of a military system that had little interest in treating their psychological injuries, at times even spurning the soldiers’ attempts for help. The Army trained young men as killers, exposed them to brutal combat situations that made them mentally unstable, and then set them loose on the civilian population of Colorado Springs with little or no treatment.

Philipps started writing a series of articles for the Colorado Springs Gazette about murders and other crimes committed by soldiers in the 4th Infantry Division’s 1st Batallion, 506th Regiment, famously known during World War II as the Band of Brothers. The articles were published in 2009; that same year, he was named a finalist for the Pulitzer Prize. Philipps, who normally writes ski stories for the paper and whose stories have occassionally run in Boulder Weekly, says he saw a trend about crimes committed by soldiers and was “mad as hell” no one else had written about the subject.

“The articles, the point of them was really to make a statement that there was something going on that was bigger than the violence in the city,” he told Boulder Weekly. “It was making an argument. We are having these murders because of A, B and C, and part of it is that the systems that were in place in Fort Carson were broken.”

There are several names for the psychological afflictions soldiers bring with them from combat zones. In the past, people have called them “battle fatigue,” “shell shock” and even “cowardice.” Since 1980, the official name has been “post-traumatic stress disorder” (PTSD), but some insist on the slightly less stigmatizing term “combat stress injuries.”

Philipps focuses on the story behind the 2007 murder of Kevin Shields, a machine gunner found dead on his 24th birthday by a man delivering
newspapers. A fellow soldier named Louis Bressler shot Shields in the
head after Shields said something “snide” that no one involved in the
events that night seems to remember. Bressler’s unit had recently
finished two almost consecutive combat tours in some of the most
dangerous parts of Iraq — the Sunni Triangle in 2004 and Baghdad in
2006. Shields wasn’t Bressler’s only victim; he had murdered another
soldier named Robert James just weeks earlier.

Philipps
delves deeply into the story behind the Band of Brothers, from the
unit’s initial deployment in Korea through the second tour in Iraq. He
assigned himself to the story after failing to convince other reporters
to take it, and he started by going straight to the source: the
prisoners themselves. Surprisingly, they were open to speaking with him.

“What
they told me was that their tours had just been totally horrific, and
that there was no meaningful game plan for re-intregrating them when
they came back,” Philipps says. “What’s interesting is that I think a
lot of times it’s difficult to talk to soldiers about what happened in
Iraq and Afghanistan. They don’t think [journalists will] understand, or
they don’t think we’ll appreciate what they’re telling us, or they
think we’re only looking for sort of really sensational stuff. … But the
guys in prison were different, because
they had been cast out of their society and had been sent away to
prison for decades, so it seemed like they were in sort of a position
where they might be doing some soul-searching. … I think that gave them
some openness.”

Supporters
of the Iraq war point to its relatively low body count as compared to
other wars — around 4,400, compared to 58,000 for Vietnam — but that
number only begins to tell the whole story of the casualties of war. As
Philipps points out, thanks to advances in body armor and armored
vehicles, more and more servicemen are seeing combat and living to talk
about it. Better armor means more cases of psychological damage than
physical damage.

And
there are statistics to support this. In World War II, you had a one in
three chance of dying from battle wounds. In Vietnam, it was one in
four. In Iraq and Afghanistan, it’s around one in 15 (Philipps averages
two figures from two different sources to arrive at that number.)

“Iraq
and Afghanistan are new kinds of war with new kinds of casualties,”
Philipps writes. “Nothing illustrates this better than this: By 2009,
while the United States was engaged in two separate wars, more soldiers
died from suicide, drugs and alcohol than died by the hand of the
enemy.”

The institutional blindness shown by the U.S. Army regarding psychological combat wounds is part of what makes Lethal Warriors disturbing.
In the infantry, soldiers are trained to control their emotions and
react intelligently under the most stressful situations imaginable. If a
soldier starts showing signs of PTSD, others might see him as not tough
enough, unable to handle the stresses of combat. Philipps writes about
how soldiers eventually convicted for murder lied their way through
flimsy post-combat mental health questionnaires, out of fear of damaging
their careers as well as alienation from their fellow troops. When some
of the soldiers did eventually seek help, they were either turned away
or shoved into an overloaded mental health system to be medically
retired or expelled from the Army using a loophole, an especially cruel
process known as being “chaptered out.”

Chaptering
out meant kicking a soldier out for having a pre-existing mental health
condition, and Philipps interviewed an Army social worker who said
superiors pressured them to probe soldiers’ past for signs of
pre-existing psychological trauma and diagnose them with that instead of
with PTSD. Then, the Army could kick out the soldier in days instead of
the months it would take to properly medically retire someone. And,
perhaps most importantly, the soldier would lose VA medical benefits. It was
the Army’s way of wiping its hands of soldiers they thought unfit or
unworthy to serve, and it left countless soldiers who should have
received proper diagnoses without a safety net.

The
Army comes off badly, but there are heroes, as well. Gen. Mark Graham
took over Fort Carson in 2007, and tragedy with one of his children had
given him a sympathetic view of mental health disorders. Six soldiers
committed suicide that year, and Graham took steps to ensure that never
happened again. He doubled the size of the base’s psychiatry staff, then
doubled it again the next year. He reached out to a veterans advocate
the Army had previously shunned. And he instituted a major
epidemiological study of mental health that eventually concluded what
seems obvious at first glance: Combat fucks with people.

Philipps
says Graham’s improvements are working. Suicide at Fort Carson is down
45 percent this year, and there has only been one murder charge. But
Philipps says the problem will continue until more drastic steps are
taken.