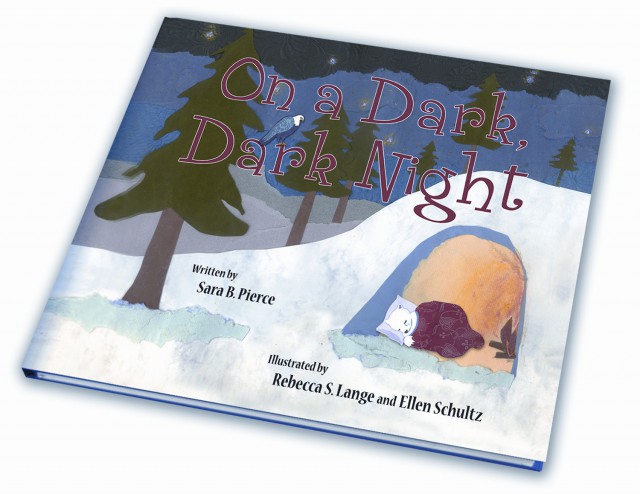 In her day job as a detective in the Longmont Police’s
domestic violence unit, Sara Pierce became familiar with children’s reactions
to seeing one parent hit another.

But she and other members of the Longmont Ending Violence
Initiative (LEVI) realized that there wasn’t much available in the way of
children’s books that deal with domestic violence.

So Pierce wrote her own.

The book, On a Dark, Dark Night, was released this month. Pierce and illustrator
Ellen Schultz will hold a public launch party for the publication from 4 to
6:30 p.m. on Dec. 2 at the Longmont Public Library.

The event will mark the end of a long process. Pierce
originally wrote the story four years ago, but she and her colleagues at LEVI
were faced with the daunting task of raising money to publish the book. Then
several area Rotary Clubs and other local organizations began donating money.
Groups that funded the publication include all three Rotary Clubs of Longmont;
the Rotary Clubs of Mead, Erie and Carbon Valley; the Boulder County District
Attorney’s Office; Nick Zelinger of NZ Graphics; and United Graphics. Pierce
credits Sue Bridgeman with taking a lead role in fundraising among the Rotary
Clubs.

The book needed an illustrator, and artist Rebecca Lange, a
library employee and LEVI member, volunteered. She began working on the book’s
images, which were crafted from torn and cut handmade paper. But Lange
succumbed to cancer in early 2008, before her illustrations were done. Then
Schultz stepped in and completed the artwork by successfully mimicking Lange’s
style.

All of the characters in On
a Dark, Dark Night are animals. “I think
kids are drawn more toward animals,” Pierce told Boulder Weekly. “It may be
easier to understand when it’s animals getting into fights rather than people.”

She says that when she was a child, she used to relate books
to her own life, and her hope was to write a story that would help kids who
witness domestic violence feel supported, less afraid and more comfortable
talking about such incidents. Pierce says children who see abuse are sometimes
too afraid to talk about it because they fear reprisal from the offending
parent, or they blame themselves for causing the anger, by not cleaning their
rooms, for instance.

The book’s lessons may help end the cycle of violence,
keeping more kids from abusing their spouses when they grow up.

“We have had kids witness it, and then 10 to 15 years later,
they’re committing domestic violence,” she says.

The story is about a bear cub
who sees his father strike his mother. He runs away, and is comforted by his
friend Moose, who brings in another friend, Eagle. Eagle, taking on the role of
the police officer, goes to the father bear and talks to him. Eagle brings him
before the animal council, which Pierce calls “the animals’ version of our
judicial system.” The council decides that the father bear can no longer stay
in the village. Several seasons pass, the father returns, and he and the mother
bear begin to talk about whether he can return home or whether he needs more
time alone.

Pierce does not ever say what was decided, but includes a passage
with the father bear saying to his son, “No matter what we decide, you still fill
my heart with joy and pride. Whether I am far or I am near, I will always love you,
year after year.”

Pierce says she leaves wide
open the question of the father’s return so that the story would be applicable
to a broad range of children who have witnessed domestic violence — whether
their parent has returned from jail or not. “I thought kids could put their own
spin on it and relate it to what they experienced in their own lives,” she
says.

Pierce dedicated On a Dark,
Dark Night to Lange, her father and her
mother, who was very proud of Pierce’s accomplishment but passed away before
she could see it in print.

The book is being sold by LEVI
and is available at www.longmontdomesticviolence.org. It will also be sold
through Amazon.com and eBay. Proceeds from the sale will be used to publish
additional copies.