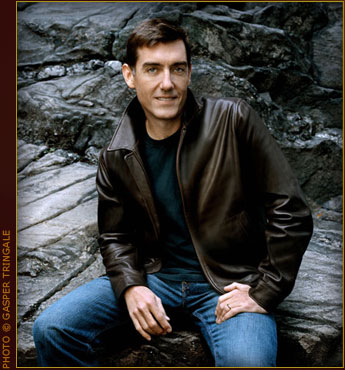 Nights have always been a busy time for Justin Cronin. A self-described “champion sleepwalker” in his youth, he has since been bombarded by vivid dreams and an active imagination, something he shares with the characters (the possessed ones, that is) in his haunting New York Times Bestselling novel, The Passage.

“I just have always had a very busy night life I guess,” he says. “I think probably a lot of writers and artists are like that actually, because we have hyperactive unconscious minds, and at night when you sleep that’s where you go.”

The Passage is a thick, nightmare-inducing, post-apocalyptic story about coming of age in a landscape laid barren by an infection that turns humans into vampires.

Audiences have responded to Cronin’s book, but so have the some of the hit makers of pop culture: Ridley Scott’s Scott Free Productions bought the rights to the novel before it was completed, for $1.75 million, according to the New York Times.

While the story has been met with success, Cronin says his initial conception of this haunting narrative had no such ambition.

“[My daughter and I] were just playing a game, ‘let’s plot a novel,’ and I was not intending to write anything and we were just spending some time together,” Cronin says. “We were doing this in an environment of perfect freedom, I had no intention of writing a book about it.”

The Passage takes place in the U.S.’s near future, following the birth and abandonment of Amy, alongside a parallel plotline of government-sponsored experiments turning convicts into vampire-like creatures, known as virals. When Amy and Project NOAH intersect, the project goes wrong, bringing about the annihilation of the sprawling American landscape. Amy’s story continues through time and space and as the constant threat of a fate worse than death looms, as characters live a terrifying existence.

“It begins very much as a thriller and as a father-daughter story, which is not very surprising because it’s a father and a daughter who came up with the idea,” Cronin says. “And then it becomes almost a road novel, sort of a Western, characters encountering a post-industrial but nevertheless an empty west for the first time, which is a great American theme.”

The Passage alludes to a fragmented society wrought with dysfunction and distrust. The motif reflects the time Cronin began constructing the story, in 2005.

“It was a combination of my state of mind at that particular time, which was fairly dark, given some public events that had transpired,” Cronin says. “The war in Iraq, Katrina, Abu Ghraib, it was kind of a really dark moment, and I was in that moment, so that was my frame of mind.”

“It’s a post-apocalyptic, horror, thriller, Western, coming-of-age road novel with structural references to Shakespeare,” Cronin says. “I thought of it in terms of a specific genre, but I also saw that this book would draw energy from changing gears.”

The plot-driven narrative benefits from strong character development and combination of genres, but the novels greatest distinction is the creation of a truly terrifying take on vampires, known as the virals.

“They make sounds that are sort of like dolphin language,” Cronin says. “They move like schools of fish, which I always found very creepy, the way some animals can move with an absolute awareness of the movements of others around them … They appear to fly because they can jump great heights, like many insects can … So I was using these bits and pieces from the natural world to construct an identity that can account for the legend.”

Cronin says that he worked to construct an identity for the virals that has grounding in the natural world. By taking the magic out of the legend of the vampire, Cronin made his virals more intriguing, more mysterious and scarier than any mythical creature.

“I wanted to have all of these elements but I wanted them to have analogs in the natural kingdom, to feel like they were naturalistically so scary,” Cronin says.

Cronin’s research required some travel, as he traced the footsteps of the character’s journey across America. Colorado plays a key role in the story, as Denver is the location of the government’s prison experiments.

“I traveled every mile that the characters traveled in the book,” Cronin says. “All the distances and the names of towns — they’re all real, they’re all based on real places.”

Cronin is taking another trip to Colorado, this time stopping on Pearl St. to sign copies of The Passage and talk to fans at the Boulder Book Store.

“I’ll sign the book and answer all of the questions and be funny and charming and I would love to see you there,” Cronin says, but not all the questions.

The Passage is just the first of three stories about Amy and her battle against the virals. The second book in the trilogy, The Twelve, will be released in 2012.

Of the book, he will only reveal a few clues: a character that hasn’t been around in a while isn’t necessarily gone, that the plot will return to year zero for a certain number of pages, resettling the direction of the story.

Cronin is an accomplished storyteller who is guaranteed to provide insight and entertainment to patrons of his literary expression.