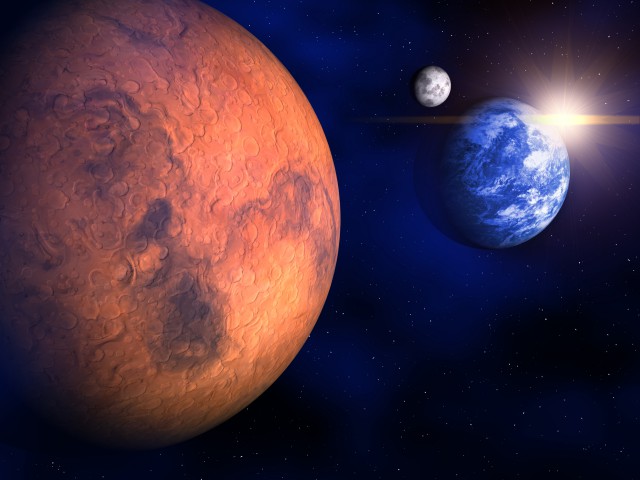 Editor’s note: This article contains a number of spoilers for the Astral Imperatives trilogy.

Popovich, the lone survivor of the original mission to Mars, has completely retreated into himself and has sat in his seemingly unconscious state in a cave for 12 years as new settlers come and gawk at him.

In a moment of desperation, Richard, another astronaut who has been stranded on Mars for more than a decade and is feared and ostracized by the other colonists, pleads with the meditating man to help him save the petty, earth-centered colonists from themselves. He doesn’t expect an answer but gets one. Yuri simply states, “I am here.”

Richard is startled. He asks, “What happened to you Yuri? Where did you go? Tell me, please, if you can. I need to know. What did you see?” Yuri’s answer is simple, but sets up the fantastic plot to this concluding book in Dresner’s Astral Imperative trilogy: “God. I saw God.”

The questions of the existence of God and the possibility of another level of consciousness permeate this novel, set in 2053, because our existence on Earth has become so tenuous and our means of escape so limited. Environmental catastrophes, combined with rampant nationalism and runaway technology, have threatened the viability of the human race.

Depending on the character’s point of view (and to some extent the reader’s), Yuri is either a savior or a charlatan.

“Yuri was the one who had to bear witness on our human existence,” Dresner says. “He inhabits different realms and realities. Is he delusional? Do you believe him or don’t you? What happened to Yuri is not out of the realm of human expe rience.

In my travels to India, I met people like that.”

The Yuri of the first two books did not seem a likely character for enlightenment. An astrobiologist by training and a world-renowned poet, he spent much of his time involved in all-too-human entanglements on the ship to Mars and on the red planet’s primitive space station. His conversion to a spiritual state did not occur until a battle between the colonists broke out at the end of the second book. Slowly, Yuri begins to reveal to the other characters just what he has seen during his 12-year sojourn communing with the divine.

“I’ve seen so much; I’ve lived so many lives and still live them. I’ve seen so much violence between beings, between countries, between worlds, between entire solar systems — even galaxies that demand more space to expand at the expense of other galaxies. I’ve seen suns that are jealous of one another’s light.”

Gradually,
some of the colonists’ curiosity turns to revulsion as they learn just
how radical Yuri’s visions were and just what they may mean for their
own existence. Is he a madman or a prophet? It’s a question that has
been asked for centuries on Earth. It’s not an easy question for the
reader when we hear Yuri get to the base of his creed.

“God is movement. God is evolution.

God
is war. God is peace. God is raping and killing children. God is
suffering for the sins of other beings in this life and in other lives,
and dying for them . … And the greatest sin of all is when we are
consigned to see the half of it, when the light of creation is divided
into good and evil, and right and wrong, between what is divine and not
divine, when we choose sides instead of choosing life when your very
lives are at stake.”

For
Yuri, the highest purpose of God is simply survival. Nothing truly
dies. Our energy must be put into the effort to survive. Of course, for
much of the novel, the very continuance of the human race is in doubt.

“Implicit
in the movement to destruction is the will to survive,” Dresner says.
“So far humanity, by the narrowest sliver, has moved ahead on the
evolutionary scale. We always choose to live, even if we aren’t conscious of how we make that choice.”

Dresner’s
Earth is still recognizable, with a few tweaks. Nationalism, especially
a powerful Russia and China, still dominate the political landscape
despite the fact that most of the world’s problems transcend geographic
borders. Our worst fears of global warming won’t prepare us for his
vision of 2053, where terrible earthquakes and fierce storms have
visited the globe. Many parts of the world experience perpetual summer,
while Western Europe and the East Coast remain mired in deep winter
conditions all the way into May. Things are degrading so quickly that
even the man in the moon can see our problems.

“The
view of Earth from moon orbit was not as beautiful as it once was
because of the smoke bellowing out of Australia and Africa, which clung
to passing clouds and turned them gray,” Dresner writes.

Even
simple conversations in the future are changing in subtle ways with the
emergence of techno-glasses. These eyeglasses act as computer screens
as well as communication and recording devices. They make today’s
laptops, iPods and Bluetooth headsets seem downright clumsy and
obtrusive. The sense
that technology will continue to march on, producing everyday gadgets
on one hand and potentially destroying the human race on the other,
imbues the novel with a sense of fatalism.

“Like
it or not, the next evolutionary step will be bio-technology,” Dresner
says. “Our physiological beings will be married to tech expertise.
That’s what can take us out of the solar system. A lot of the story is
predicated on whether we are prepared for that evolution.”

On
Earth, the charismatic Fritz Kreiger believes that we are not ready to
make the evolutionary leap into space. After reaching prominence during
the first manned mission to Mars as an opponent of the program, he
disappeared during the following years. The awakening of Yuri, an event
that has as many repercussions on Earth as on Mars, forces Krieger out
of his anonymous life and back into the forefront of the battle to save
mankind.

Krieger
visits the man who helped create the powerful Dream Machine that is
housed on the Mars colony. The Dream Machine started as a simulated
holographic game in the first novel, but has now achieved sentience and
has either
communed with the divine or been hijacked by an alien intelligence. As
Yuri and the Dream Machine set off from Mars to return to Earth tensions
build between nations vying for control of the all powerful computer.
It is Krieger, one of Dresner’s most balanced and finely drawn
characters, that tries to take the lead in the response.

The
question of just who Yuri is becomes paramount. In a world that is even
more skeptical and cynical than ours it is certainly hard to accept
Yuri at his word as he speeds towards Earth with something more powerful
than all the bombs on the planet. The Dream Machine contains the power
to both destroy and save humanity.

“We
don’t have seers. We are such a regimented culture that we are losing
our seers,” Dresner says. “Sometimes the greatest transformations of
enlightened beings are discovered at the bottom of despair. How do you
get to that bottom on Prozac or Ritalin? We are denying humanity the
full range of experience. When you have hooded instincts and padded
senses, it is easy to get blind.”

Perhaps as readers contemplate some of the technological, ecological and spiritual issues that Dresner raises in ReGenesis, they will begin to see just a little more clearly into the future.