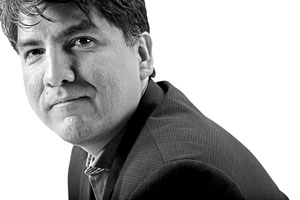 He doesn’t quite match the hermetic, reserved image many poets and novelists are so quick to embrace. Aside from being an accomplished and prolific writer of poems, short stories and novels (he has published more than 20 collections of his work), Sherman Alexie is a performer.

“Why would someone expect a writer of a book to be boring?” Alexie says, laughing, during a phone interview. “I just try to be as interesting as my books are. And I would expect every writer to want that. And some don’t. I have friends who hate performing.”

Alexie has said in the past that he has based his career off of giving engaging poetry readings, and his love of and emphasis on performance spill into his writing. In War Dances, Alexie’s latest collection of poems and short stories, there are three pieces in which the narrator speaks to an unnamed other, whose presence is denoted solely through italics. The effect is a mysterious sort of call-and-response interplay, with the second voice sometimes playing the role of friend or audience or even subconscious counterpoint. Alexie’s piece, “Catechism,” is comprised purely of questions and answers that reads, at the risk of journalistic projection, suspiciously like an interview. When asked what he called that unusual form and why he used it so frequently in War Dances, Alexie burst in laughter.

“What do I call that form?” he exclaims. “Uh, calland-response? It certainly does have some religious roots, the original structure of it. I think most of the stuff I do in the book that is call-and-response has some sort of spiritual element to it, whether seriously or ironically. And the great thing about it is that sort of ethereal quality you don’t really know who the folks talking are. I like that mystery.”

Perhaps it shouldn’t be surprising that there is a sense of an audience appearing in Alexie’s work. The Seattle-based writer has made a reputation for himself by elevating typical ho-hum poetry readings into riveting poetry performances; at the same time, his writings have propelled him into the upper echelon of American fiction writers. But Alexie rejects the notion that his charismatic performances are somehow innovative.

“It’s so funny that people think it’s something new or odd or different. It’s actually old-fashioned. The idea of words on the page in human history is relatively recent, but people have been telling stories [since] the dawn of human history… So, I am following an ancient impulse. I think because it’s something ancient, I think that’s why a lot of people enjoy my performances so much,” Alexie says. “And all of us, in the presence of a storyteller, turn into eager children.”

Alexie experiments with storytelling devices throughout War Dances, bundling it all together in the collection’s eponymous short story. “War Dances” is undoubtedly the book’s highlight (something Alexie himself freely admits), containing, among other things, 73-word mini-chapters and a section called “Exit Interview for My Father,” which manages to be bitingly emotional and funny while consisting entirely of bulletpoint lists and A), B), C) subsections with a poem somehow integrated along the way. The story itself weaves seamlessly between the narrator’s retelling of his father’s ultimately fatal health problems and a strange health issue he fears might take his own. Alexie, a master of moods, is able to write passages of tear-inducing poignancy and then sever that tension with something so funny you end up laughing as much from relief as from comedy. One page, the Indian narrator is singing a healing song with his weakened father in the hospital, and just pages later, his brother-in-law is bragging he can “shop the shit out of Trader Joe’s.” It’s a special story, and it’s worth the price of the book alone to read it.

“Fearful Symmetry” tells the struggles of an accomplished poet-turned-screenwriter whose experiences with Hollywood movie-making infect him with an incurable case of writer’s block. In the story, Alexie, himself having dabbled in the film industry, explores the carnivorous nature of collaborative art and asks the question, does deep knowledge of an experience as magical as movies destroy the innocent wonder of our initial response?

“They always say, ‘Never watch sausage being made’ … I guess I’d amend that. You don’t want to know how sausages or movies are made,” Alexie says. “Movies have such a powerful pull on us. You can sit on a dark theater, and you’re in that world in a way that you aren’t with any other art form. In a great movie, you’re utterly transported. Because it’s a collaborative medium and because there’s so much money involved, it’s naturally corrupt and nasty. Even a gorgeous, wonderful, beautiful movie about the power of the human spirit was probably made by a series of sociopathic assholes.” Alexie laughed. “That character [in ‘Fearful Symmetry’] and I are still drawn to making movies and to watching movies. So, once you have the knowledge about it, how can you go back into a theater and recapture that? How can you, you know, eat the sausage again?” He pauses. “And you try, and I try, and it’s a constant struggle.

Sherman Alexie will speak about and sign War Dances.