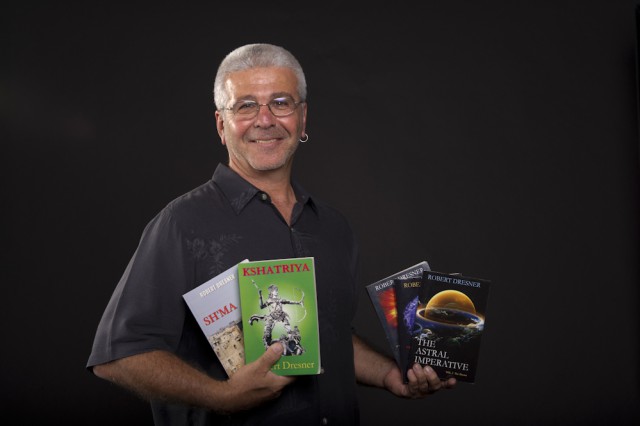 Boulder novelist Robert Dresner is openly self-derisive when he talks about his work.

“There’s no way I’m ever having a mastery of the language,” the Boulder novelist says, but adds, “Y’know, I have moments.”

He’s not naturally gifted when it comes to grammar — “I didn’t learn grammar until three years ago,” he says, with no shame or embarrassment — and he freely admits that his novels contain dozens of editing errors.

But he makes up for what he lacks in formal mastery with obsessive devotion to the craft.

“Revision is more of a compulsion,” he admits. “I enjoy getting it right. I enjoy improving.”

This year, he has finally given way and stopped revision — for now — on the longest-running project in his life as a novelist. Older than most people in Boulder, the novel Kshatriya has taken him 31 years and countless revisions to complete. (The median age in Boulder is about 29.)

Dresner says he has no illusions that this version of Kshatriya is flawless.

“There’s always a next version,” he says.

Even as he self-publishes Kshatriya, he’s been revising his popular Astral Imperative series and plans to release new editions soon.

Kshatriya follows a group of Americans on crisscrossing paths through 1970 India as they hunt for God, self and safety. In a style both quick and deliberate, Dresner tackles the social, moral and spiritual ills of his expatriate characters and society at large.

Dresner’s characters — the hardheaded Max, the aimless Diane and the world-wise Shunya — each struggle with tests of their faith in themselves and in the world around them. And the results aren’t always pretty — just as they weren’t when Dresner took a trip through India himself just before writing the book.

Dresner says he wrote the first draft after returning from India, although the original might now be unrecognizable as Kshatriya. It spanned 800 pages, trimmed to 370 in the final version. And it was firstperson, revealing just how personal the novel is.

Much like the characters, his journey through India was fueled by a spiritual longing and a desire to see the world.

“I wanted to learn of the world by a process of osmosis,” Dresner says. “I wanted to throw myself to the world.”

Kshatriya, he says, is the story of himself and others who took that leap and weren’t always satisfied with what they found.

“It’s about people who went to find God and didn’t find him,” he says simply. “I learned a great deal but didn’t find a guru. Just regular people.”

These encounters populate much of Kshatriya, as Max, Shunya and Diane search high and low across India for answers to their spiritual doubts. What could be just a procession of gurus, yogis and towns is carried along nicely by the novel’s fast pace, set by brief chapters and jumps from one protagonist to the next.

To match the pace, Dresner deftly employs cliffhangers at the end of many chapters, jumping off to Max in the Himalayas and leaving Shunya in Delhi to fend for his life. The characters’ paths get a bit tangled at times, but the device reveals how the characters’ various travels fit chronologically and thematically.

The themes of Kshatriya — the quest to know more to know oneself, among others — aren’t particular to that book, not even in Dresner’s portfolio. Having written four other books that span from standard fiction to sci-fi, Dresner admits the books aren’t as different as they seem.

“The same DNA runs through all the stories,” he says. “My novels are one story of human potential.”

“It’s the same story,” he says with a laugh. “And I didn’t connect them, they sort of connected themselves. The results came from an instinct. They weren’t planned out.”

Dresner’s stories might be out of his control, but publishing them isn’t. Just the opposite, he explains — Dresner says he chose self-publishing under his own company name, Virga Press, because it offered him freedoms that larger publishing houses couldn’t.

Despite praise from members of the publishing industry for the first book of the Astral Imperative series, Dresner couldn’t convince anyone to publish his work. Since then, he’s found that wasn’t a bad thing.

“I’ve been very fortunate because I’ve done nothing,” he says. “I’ve made no effort to advertise the books.”

Yet he’s one of the top-selling local authors at the Boulder Book Store, the store confirms.

“I want to put out the best products I can. I also don’t want to get obsessed with publishing and selling the books instead of writing them,” he says. “Given the choice, I’d rather have five completed novels. I’d rather have done the work.”

The next chance readers have to meet the author behind the work is a signing Sept. 22 at the Boulder Book Store.

[ On the BillTo buy a copy of Robert Dresner’s Kshatriya, visit the Boulder Book Store, or visit www.boulderbookstore.com. ]