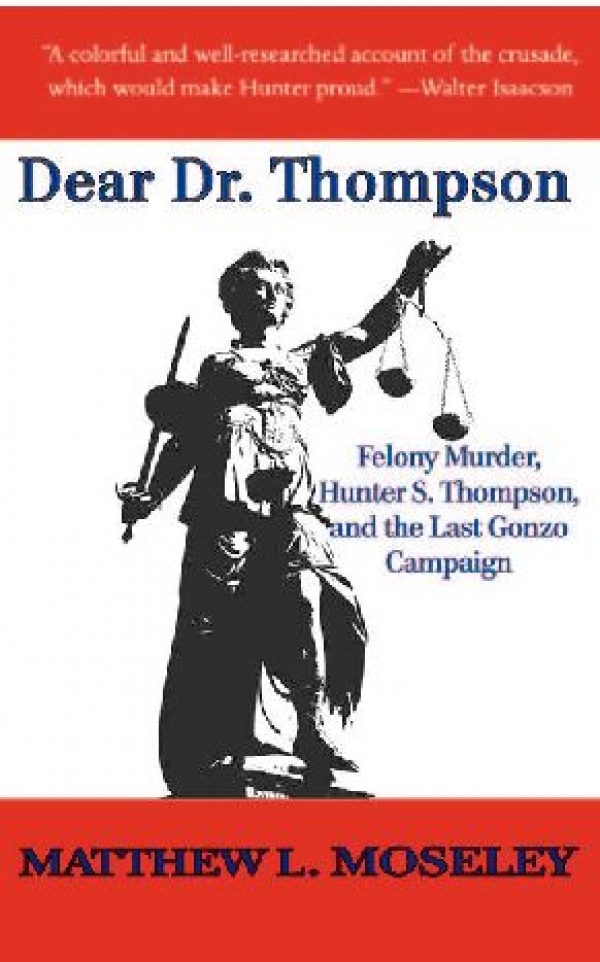 In 2001, convicted murderer Lisl Auman was 13 months into a life sentence when she wrote a letter to the author of a book that had recently brought her some joy in prison.

“I laughed out loud while reading Fear and Loathing in Las Vegas during my stay (13 months) at the Denver County Jail. Thank you for helping to bring a smile to my face,” she wrote, going on to say, “My name is Lisl Auman and I was convicted of felony murder in 1998 for the murder of a police officer. However — I maintain my innocence!!! … Check out the website they set up for me at www.lisl.com. Only if you’re interested, of course. Bye bye, Lisl.”

Somehow, the letter made it out of the perpetually overflowing mailbag and into the hands of Hunter S. Thompson, writer, journalist and pioneer of a new form of narrative journalism called “gonzo.” It was fitting that Fear and Loathing in Las Vegas would inspire Auman to write. The book is Thompson’s 1972 masterpiece, a novel filled with drugs, excess and righteous indignation as the once-glorious faÃ§ade of the American dream crumbled around a generation. As Mikal Gilmore wrote in Rolling Stone, “the fear and loathing Thompson was writing about — a dread of both interior demons and the psychic landscape of the nation around him — wasn’t merely his own; he was also giving voice to the mindset of a generation that had held high ideals and was now crashing hard against the walls of American reality.”

Thompson fired back a response to Auman some time later, and he then went to work setting in motion the machinations of a massive and eventually successful campaign to get her out of jail. Boulder author and political strategist Matt Moseley helped coordinate that campaign, and he has chronicled those experiences in Dear Dr. Thompson, a new book about the Lisl Auman case and the injustice of the concept of felony murder.

The basic story of Auman’s case is this: A sweet but naive girl struggling with low esteem, Auman found herself drifting from one destructive relationship to another throughout high school and several years after. She found the courage to end one, but her ex wouldn’t immediately return her belongings from his apartment after the relationship ended. So she enlisted two men — skinheads, as it turned out — to help her break into his room so that she could get her possessions back. The skinheads stole her ex’s things, as well, and some neighbors called the cops. After a dramatic car chase into Denver, Auman and Tao Jaehnig left the car and began fleeing on foot. Officers arrested Auman first, and while she was in custody, Jaehnig shot Officer Bruce VanderJagt in the head, killing him instantly, and then grabbed VanderJagt’s gun and shot himself.

With no one else left to charge, then-District Attorney Bill Ritter charged Auman using the felony murder rule, which basically says that anyone involved in a felony can be held liable for a murder committed during the course of that felony — even if someone else pulls the trigger. Auman was convicted and sentenced to life in prison for a murder committed while she was in handcuffs in the back of a police car.

Moseley read about the case and faxed a memo to Thompson outlining a public relations strategy for a potential campaign to free Auman. That day, Thompson called back and said he wanted to meet.

“It is odd, now that I think about it, writing the memo, what a blind shot that was. I had read Fear and Loathing on the Campaign Trail ’72 when I was 19, I think, and that’s pretty much what inspired me to get into politics. … He was always somebody I wanted to have a drink with, but he wasn’t really my hero,” says Moseley, whose shrine of gonzo memorabilia in his writing shed in his central Boulder home indicates how he felt after getting to know him.

Dear Dr. Thompson is a gripping and finely written chronicle of the Auman case. Auman, trying to keep her head low while on probation, declined to participate in the book, something Moseley admits initially disappointed him, but which helped the book.

“It freed me up. I went from being really her advocate, you know, I was her family spokesperson, to telling a broader view. When I really wrote the book, I wasn’t her advocate anymore, I was really telling more of a broader story, not just this ‘Lisl was a nice girl who grew up in Colorado, and wasn’t she sweet.’” The Colorado Supreme Court made a ruling that led to Auman’s release in 2005, the details of which are complex and fascinating. But the book is about more than that, and it should be required reading for anyone curious about the last crusade of journalist, writer and raging moralist Hunter S. Thompson.