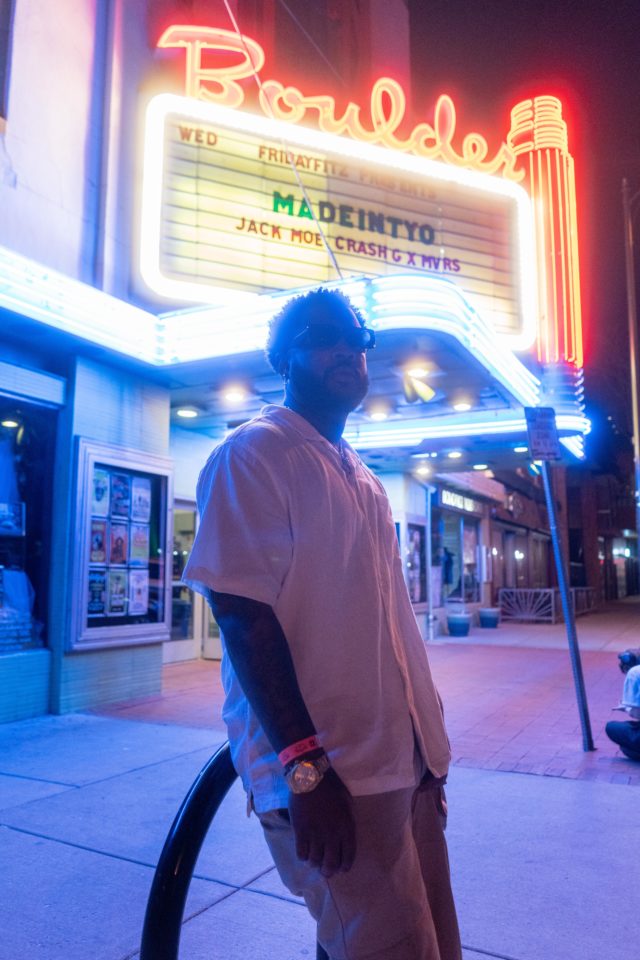 Ask any Denver-based rapper to describe the local state of their genre and, more times than not, the answer will fall somewhere in the vicinity of, “High in talent, low in representation.”

Consequently, a geographic triangle linking Boulder and Colorado Springs to Denver’s beating heart has local hip-hop betting on itself and leaning on its pieces for support. Success hinges on two key factors: consistency and confidence. Right now, Amone Gragg, known in the metro area as Crash_G, knows he’s got to get back on the horse where consistency is concerned.

“I haven’t been on a routine in the last few months,” Gragg admits. But he’s starting to get back into it.

The California-turned–Boulder-turned-Denver emcee reaped the benefits of structure early in his Colorado tenure. Even if he was just having fun with it, the release and immediate success of his track “Miss Lady” in 2020 perked up ears in Boulder. From there, Gragg got into a groove: lay down a track, push it to streaming services, catch a wave of digital attention, then perform at Roxie’s Tacos or Taco Junky on 13th Street. Hill-centric shows turned into pop-ups at Denver’s Black Box and Your Mom’s House. Gragg began realizing his predominant assets as an artist. First, and most noticeable, is his voice—perhaps the most under-recognized apparatus in any rapper’s toolbelt—a unique mark often overshadowed by traditional discussion buzzwords like flow and production.

“It’s smooth, bro,” he says, “the way I talk—having those West Coast ties—is best described as smooth and collected.”

Most young rappers opt to cut through production with commanding, in-your-face delivery. Gragg lets the beat come to him, using calmness as a means for success, floating naturally alongside the music.

Then there’s the yin to his yang, Eddie Mehari, known by his stage name MVRS. Nearly every track Gragg has recorded features Mehari. When asked where the dynamic musical connection with Mehari spawned, Gragg says, “That’s like asking the Migos where they got their synchronization—shit, bro, it’s always been there.”

Familiarity is key to collaboration, and Gragg and Mehari go way back—back before the music was even something to be taken seriously. Mehari recalls their days in Boulder, saying, “We’ve done it at the same time because we’ve been roommates. We’d be in the basement cooking up beats, trying to rap to shit.” After doing it enough, they knew it worked.

Their first chapter’s peak came on April 20 at the Boulder Theater, when the pair joined MadeinTYO for celebration of the holiday. A year before, Gragg was rapping on the sidewalk in front of the venue as part of his “Boulder Freestyle” music video. Now, Gragg and Mehari were the ones on stage. Being in the same room as a big name—not as a fan, but as a co-performer—allowed Gragg to realize where he and Mehari’s work could take them.

“What’s more,” Gragg says, “is I knew [MadeinTYO] was probably doing the same shit we were at one point in time—opening up for bigger artists. If you got it, you got it.”

When we connect for our phone interview, Gragg has had a tough week: He’s stuck at the gate of an airport in Las Vegas, battling against day-long delays. When he finally gets home to Denver, he finds his car is stolen. He’s got to be back at DIA in a day to head West. Between police reports, a ride home, unpacking, repacking and taking off again, Gragg locks in to a discussion about his musical career as naturally as he locks in on beats. Gragg’s upcoming project—an untitled EP with big features and even bigger ambitions—will leave no stone unturned.

“I don’t want to use the word experimental,” Gragg says, “but at the same time, I feel I’m really sticking my toes in the water with this project.” Gragg doesn’t want to fall into the trap of being pinned into one style. He wants to be on a big enough spectrum that he’ll “make some country or pop shit if it sounds dope.”

Gragg doesn’t reveal too much about his soon-to-come EP, but makes one pocket of the creative process clear—total control. Denver and the surrounding area sees nearly every rapper taking a DIY approach. Chi Hun Lai—a Boulder artist going by noodleinthewok—produces and mixes a number of Gragg and Mehari’s songs as a close collaborator. But Gragg estimates that 75% of his catalog is homegrown.

“[Mehari] and I have come to an agreement that, album wise, we want it to be right here in the house.” The decision to have full control of his biggest EP to date is yet another—and probably the most important—testament to the confidence both Gragg and Mehari have in themselves and their close team. On July 13, the pair will share a stage with Chiddy Bang at Cervantes’ Other Side in Denver, where they’ll certainly reignite the level of consistency needed to succeed in a city whose rap community is nearing a breakthrough.

“It’s a powder keg waiting for its spark,” Mehari says. “Whatever sets it off, there will be a blessing in disguise,” Gragg elaborates, “when that one person does finally reach the pedestal, hopefully everybody in Colorado backs them up crazy.”

For a community whose trust and reliance in itself has steadily grown, once the door opens, it’s open. And when that door busts off the hinges, Gragg and Mehari will be there—confidence and consistency in tow.