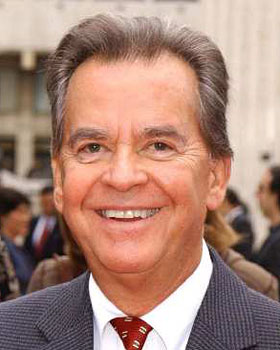 The former Philadelphia DJ started out on a local show called Bob Horn’s Bandstand,
substituting for the titular host. He took over in 1956, beginning a
career path that would make “America’s Oldest Teenager” a legend. In
1957, ABC picked the show up for a national run that kept the growing
teen market entranced and cemented Clark’s status as a pop culture
touchstone. The show — an intoxicating mix of studio-audience dancing
and pop-star appearances — ran daily until 1963; it moved to Hollywood
the next year and ran weekly until 1987, then continued in syndication
for another two years.

The likable host’s appeal even survived links to
the “payola” investigations of the late ’50s and early ’60s, as he
quietly divested himself of his interests in record distributors to
avoid the appearance of impropriety.