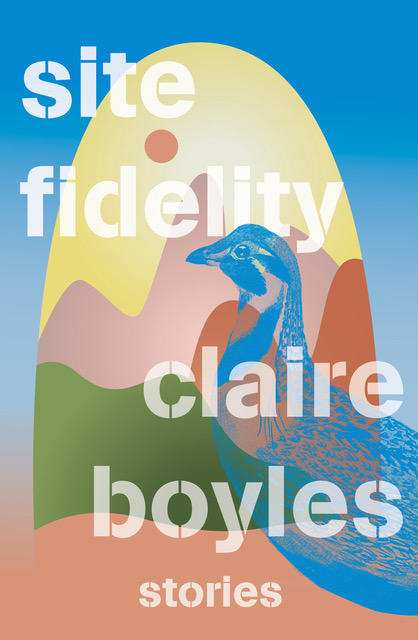 In the ruins of the sugar mill on Madison Avenue in Loveland, one of the buildings has a message painted on the roof: “IT WAS SUGAR, STUPID!”

The story behind that message goes back more than a decade and served as a small piece of material—a beet for processing, if you will—for a piece in Claire Boyles’ debut collection of stories, Site Fidelity.

The quick summary is that someone was arrested near the factory for what an initial test said was methamphetamine, but was later proved to be only sugar.

It’s one of those details that seems too good to be taken from real life.

“I wish I had made that up,” Boyles, who lives in Loveland, says. To use that detail, she cleared it with one of the actual people involved in the case, whom she knows personally.

Many of the stories in this collection, which won the Whiting Award and is longlisted for the PEN/Robert W. Bingham Award and the Reading the West Award, are inspired by journalism, both current and past.

Take the piece “Flood Stories,” which opens with a dramatic telling of a mother and daughter caught in the Big Thompson River flood of 1976.

Here, Boyles writes beautifully about what her characters see:

“The rock wall of the canyon against the road turns pink-golden in the waning hours of the day, the tops of pines that line the steep mountain incline on our side of the river catch the sunset light and burn like torches.”

Boyles and her family lived firsthand the struggles of working class Coloradans many years ago when they tried for five years to run a 20-acre farm north of Kersey, Colorado, with vegetables and cut flowers and chickens and pigs.

After the farm wasn’t a success, Boyles went back to get her master’s in creative writing at Colorado State University when she was 40. She graduated in 2018. She wrote most of these stories in her classes at CSU.

Now she has a collection published by W.W. Norton.

“I did not go into it thinking it would work out this way,” Boyles says. “There was never a moment where I thought this right here is where I would be in 2022. But I’m very grateful.”

All of the pieces are set in the American West. If there’s a throughline in the book it’s Boyles’ interest in how resource extraction, including fracking and mining, affects our lives and environment.

To highlight that, she points out that the mining history of the West is still alive and relevant.

“Even though it’s often thought of as exclusively a ’49ers, Gold Rush-situation, which is absolutely not what it ever only was and not what it is now,” Boyles says.

She explores these themes without devolving into polemic or coming off as preachy.

The stories are character-driven more than anything, with the themes of environmentalism woven in with skill and subtlety.

She follows characters through generational stories to show how extractive industries, including agriculture, drive the way people live in this part of the world and how it impacts the land.

This is not a linked collection, but many characters reappear throughout, like Sister Agnes Mary, who, in one story, has taken to sabotaging heavy machinery on a fracking site next to a playground in an effort to protect children from toxins entering the atmosphere.

The attempt strains the health of the older woman, but Boyles deftly renders the tenacity of her purpose.

“The pain is excruciating, all-encompassing, as if her joints have split open to leak poison into the rest of her, but her soul feels once more fertile and verdant, honeysuckle over boxwood, evergreen,” Boyles writes. “Sister persists, but she moves so slowly through her pain that she worries she will not finish the job before the men arrive.”

Boyles’ writing shows how climate change and environmental problems affect humans, while also showing how humans have lives beyond those concerns.

It’s important to Boyles to find ways to show the reality of life, with people living in ways that don’t harm the planet, but also sometimes in ways that are contributing to an environmental issue.

She does this without being heavy-handed, erring on the side of drama, entertainment and character, showing how peoples’ circumstances affect their relationships to the industries around them, or, as she puts it, “The ways we often don’t have choices about whether or not to engage, or choices about whether or not those things show up where we live.”

“I try to have compassion,” she adds. “We’re all caught in the systems.”

Many of the main characters in the stories are women, which Boyles points out is not always the case in narratives about this region.

“You need to show what it means to be a woman in the modern American West and what women are contributing to the narrative,” she says.

Five short story collections by women in the West, as recommended by Claire Boyles:

The Prince of Mournful Thoughts by Caroline Kim: These stories span the Korean diaspora, exploring life through generations, from medieval Korea to the Korean War to Korean-Americans living in modern society. Kim lives in Northern California.

Sabrina and Corina by Kali Fajardo-Anstine: Most readers of modern literary fiction in Colorado have heard of Denver’s own Fajardo-Anstine. This book, which mainly follows Latina characters of indigenous ancestry, was a finalist for the National Book Award.

Cowboys and East Indians by Nina McConigley: These tales of Wyoming and Indians from India examine the cultural clash immigrants experience in the modern American West. McConigley was born in Singapore and lives in Laramie.

The Blue Hour by Laura Pritchett: Set in the Colorado mountains, this about how a community forms around people living off the land. Pritchett lives in Colorado, near the ranch where she was raised.

Ghosts of Wyoming by Alyson Hagy: This book is set away from the glitz and glamour of Wyoming’s tourist destinations, instead telling the stories of the people who live in the truly open spaces of the Cowboy State. Hagy lives at the foot of the Laramie Mountains in Wyoming.