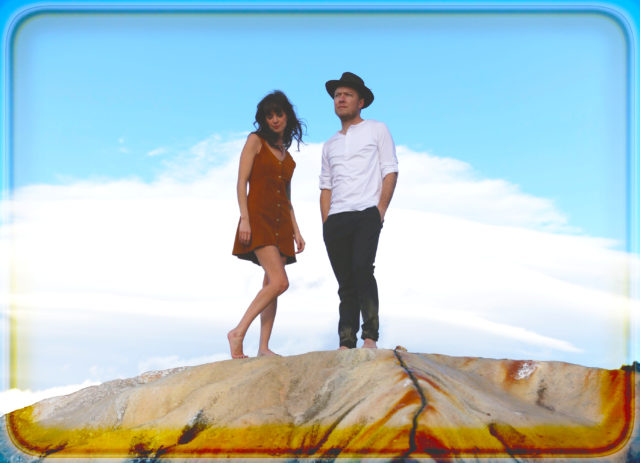 amily has always been at the heart of Little Hurricane’s music.

That seems like an inevitability for a band entirely composed of a husband and wife who met on Craigslist in what they assert was “more than a missed connection.” Guitarist Anthony Catalano and drummer CC Spina have turned that impulsive jam-session meetup into marriage, children, and more than 12 years of undeniable chemistry on their records.

“We kept our relationship a secret because we didn’t want that to be the focus of our band,” Catalano says. “But ultimately, we changed our position on that, because I realize our music is us.”

Hailing from San Diego, Catalano worked as an audio engineer for years before realizing he had a knack for songwriting and performance.

“I wasn’t feeling as fulfilled as I am now,” he says. It ultimately led him to Spina, who quickly impressed him with her style of drumming. Right away, the two formed a bond over their love for an eclectic variety of genres, ranging from punk to jazz to blues rock—influences that shine through on their five albums to date, as they weave through the sounds of 2010s-era indie rock contemporaries, never choosing to commit to one particular style. From their home studio in Lake Tahoe, Catalano smiles over Zoom as he settles on somewhere between “dirty blues” and “lo-fi” as the best descriptor of the sound they’ve curated.

Regardless of what their music sounds like on a particular track, that familial bond shines through in their lyrics and overall tone.

“I feel like there’s a dynamic, with female energy on the drums and the power that CC gives, and the energy that I’m bringing. Our songs have a tempo,” says Catalano. “And the two of us can ebb and flow with tempo and energy and it creates kind of a little ride of emotions.”

That focus on their pairing has been the secret sauce behind Little Hurricane’s success, as the couple hasn’t included other members aside from the odd backing instrumentalist on tour, or some help in the recording studio. While some contemporary rockers who move between different genres as casually as Little Hurricane might feel the need to branch out and include layered orchestral tapestries in their recordings, Catalano and Spina always hone in on guitar and drums, creating a record firmly planted in catchy, stripped-back hooks and foot-tapping grooves.

“We’re always trying to do something different,” Catalano admits. “But it always ends up being simple. It makes us refine the song to its most essential parts.”

For many artists, relying on the same creative partner for a decade or more, coupled with a pandemic that put a hard stop on touring, might leave them stir crazy.

“(Touring) was a big part of our lives, and it was a real shock not to have that component anymore,” Catalano asserts, though he says spending all that time with the family has given him a renewed sense of creativity in its place.

In the past few months, the duo began work on their sixth album, Life is but a Dream, a collection of nursery rhymes infused with the sensibilities of blues rock. This, of course, was inspired by getting familiar with these songs when singing them to their children each night.

“You grow up with these songs, you know? It’s kind of ingrained into your earliest memories. The songs aren’t new, they’ve been sung the same way for 300 years,” Catalano says.

Catalano found it a “songwriting challenge” to incorporate wonderfully weird elements like a slide guitar into classics like Row, Row, Row Your Boat, but in the end, was happy with the results, which will culminate in a 16-track album set to release later this year.

Additionally, that stay-at-home creative process has found ways to yield both fun opportunities and more inspiration for future music. Just last summer, Catalano had the opportunity to engineer Neil Young’s 41st studio album, Barn, which was recorded at Studio in the Clouds, located in the remote San Juan mountains near Telluride.

“I got to be a fly on the wall,” Catalano reminisces. “It was a weird experience.”

As the band transitions to a post-pandemic world, one where they’re much more saddled with the added responsibilities of parenthood or helping other artists record, they don’t seem to view their own music taking a backseat. In fact, Catalano is eager to proudly display their at-home studio, where they plan to invite artists both big and small for an opportunity to record their work and get guidance from the seasoned pair.

“It’s a way to get our creativity out,” Catalano says, alluding to how returning to his roots as a producer will make the work of Little Hurricane even stronger. “Of course, people are like, ‘Oh, they changed,’ or, ‘Oh, they’ve gone soft,’ or, ‘Their sound has changed.’ And really, we’re just writing different kinds of music. Even if we try to write a country song, it ends up sounding kind of like us, because it’s still the same old vintage drums. I feel like the lane is us. And the lane is the sound that we create.”

“It’s all one and the same now,” he adds, “where our relationship onstage and offstage is this dynamic of the two of us and the energy that we create. It’s been special. I never predicted my life going this way.”