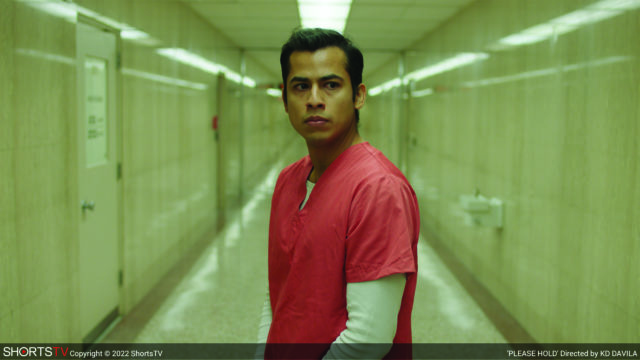 Sometimes they are complete stories told with brevity and punch. Sometimes they are elongated trailers for talent yet to come. Sometimes they are provocations designed to rally and rile, but every year, the Oscar-nominated short films prove to be categories worth discovering. Packaged and distributed to local theaters via ShortsTV, the 15 nominees are divided into three ticket packages—Animation, Documentary and Live Action—and cover a wide range of techniques and talents.

And each year, one category pops a little more than the rest. For 2022, that honor belongs to the nominees for Live Action Academy Award—five visceral and unforgettable stories from across the globe. My favorite: Please Hold from director K.D. Dávila. Set in the near future, where the totality of the incarceration process has become automated, Dávila uses absurdity and humor to present arrest, intake, incarceration and legal council as a series of impersonal and dehumanizing transactions that would have made Kafka proud. That Dávila and actor Erick Lopez make it humorous only adds to the reality of the situation. It feels prophetic and perfect.

The other nominees include the Kyrgyzstan-set Take and Run—incarceration of another kind—the Polish drama The Dress, the British terror The Long Goodbye (starring actor and rapper Riz Ahmed) and the sad and sweet On My Mind with Danish actor Rasmus Hammerich finding the words to say goodbye. All four shorts work best as a surprise, so their secrets will remain safe here.

Though not as strong as the Live Action category, the five nominees in Animation are just as global and varied. From the U.K. comes Joanna Quinn’s hand-drawn Affairs of the Art, a humorous look into the sometimes chaotic and obsessive life of 59-year-old factory worker Beryl. From Chile comes Bestia, with stop motion animator Hugo Covarrubias juxtaposing the delicacy of his main character as a porcelain doll and the atrocities of her actions—she’s based on the Chilean war criminal Íngrid Olderöck. The hand-drawn Russian BoxBallet from Anton Dyakov is another study in juxtaposition with two damaged souls coming together. He’s a hulking mass of a low-rung boxer, she’s a delicate and slender ballerina, and they’re both presented in an exaggerated and grotesque style reminiscent of Ralph Steadman. Spain’s The Windshield Wiper takes an untethered, free-flowing look at modern love through the artwork of Alberto Mielgo, and the British stop motion studio Aardman rounds out the five with Robin Robin, the story of a robin raised as a mouse. Don’t let the presence of Robin Robin fool you: none of the other four nominees are remotely family-friendly.

Last but certainly not least, Documentary. Four of the five nominees cover U.S. stories, with Three Songs for Benazir (Afghanistan), as the lone international offering. It’s good, not the best of the bunch, but a revealing look at daily life and love under the shroud of the Taliban.

Three Songs for Benazir is also the only short taking the slice of life approach to storytelling. The other four go for the full course. Of them, The Queen of Basketball, about three-time college national champion and Olympic silver medalist Luisa Harris, is the most filling. Jay Rosenblatt’s When We Were Bullies is the most perplexing—you’ll see what I mean—while Audible, about the Maryland School for the Deaf football team, is sweet but feels like an SC Featured segment on SportsCenter. That leaves Lead Me Home, Pedro Kos and Jon Shenk’s look at people experiencing homelessness in Los Angeles, Seattle and San Francisco. Profoundly humanistic, Lead Me Home is slickly made but bites off more than it could ever hope to chew. And at 39 minutes long, it can barely introduce the players, let alone their separate issues or any whiff of suggestion about ways to move forward. Some movies leave you with more questions than answers—sometimes a good thing—but Lead Me Home somehow makes an already ungraspable situation all the more distant.