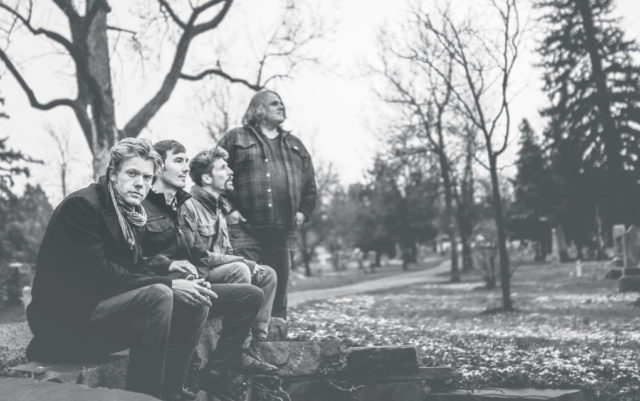 Seemed a curious thing that Clay Rose and the Gasoline Lollipops should be doing a Tom Petty complete-album for New Year’s Eve at the Fox this year. Not that it’s all that rare, of course, for bands to trib-up for special events. But Petty struck us as maybe an unlikely subject, at least for a guy like Clay Rose, artistically steeped in the turbulent second-cousin worlds of Townes Van Zandt, old time country and punk rock.

And a Petty solo album to boot: Wildflowers. Petty is a fairly regular installment on classic rock radio, of course, and his death last year cast plenty of critical reflection on his long career and faded-jeans, his regular guy oeuvre. There aren’t many of his generation that could so effectively marry plaintive elegies to hurt, and toss-off whimsy and everyman injustice to straightforward, consonant hooks and sing-along choruses. Most of that critical appreciation naturally focused on his work with The Heartbreakers, but his solo work did not go unnoticed, and for Rose, Wildflowers has a special time-and-place resonance.

“Donny, our guitar player, is obsessed with Tom Petty,” he said during an interview earlier this month, “and that album came out [in 1994] at a very formative time for me. I’d moved back to Tennessee, and fell in love for the first time, and the girl I fell in love with was also obsessed with Tom Petty. We were all a bunch of stoners, hanging out in the park playing hacky sack, and that album was playing out the back of everyone’s car that summer.

“I’ve often referred to that as my own personal summer of love, since I missed out on the historical one. That was sort of the soundtrack to it.”

We suggested there’s a kind of hopelessness to the songs on the record, almost a darkness. Critics have pointed out that the album came at a rocky time in Petty’s life — an increasingly intrusive drug habit, a failing marriage — and many of the songs pivot around the corrosion of ideals, loss of confidence, a sense of being pick pocketed by time itself. Ironic, maybe, that it summons a glow of nostalgia, and maybe less so if Rose relates to the songs’ content differently as an adult.

“Yeah, I guess there’s definitely melancholy to it. I don’t know that I’d call it darkness. I can’t think of a single song on there that I’d call dark. It’s bittersweet.

“I guess as I’ve been playing these songs a lot, I definitely relate to a lot of the stuff in there. But at the same time, it’s very nostalgic for me. It’s hard to see it as new material, or just as it relates to myself now.”

We caught Rose at a uniquely chaotic time: His wife was a few days overdue for the birth of their second child (at the time, the child’s sex was unknown — “We’re old fashioned,” he confessed) and Rose was running errands for his way-pregnant wife and helping a friend through a kind of life-maintenance situation, so he was in the car. It was actually kind of fitting, since we have an abiding sense that chaos, controlled and otherwise, is more often than not Rose’s co-pilot anyway. (Not that chaos gets the better of him… at zero hour, the midwife didn’t get to their house in time and Rose delivered the baby himself. How’s that for meeting a deadline?)

Some of that chaos gets released in unexpected ways. Last October, Rose and Garrett Ammon, creative director of the Denver-based dance company Wonderbound, staged Wicked Bayou, a ballet production based around Rose’s other musical project, Widow’s Bane, and starring its main character, the soul larcenist Governor Mortimer Leech. Inspired by the swampy fever mythology of Cajun folklore, dancing skeletons reveling in Dionysian abandon, and based on a story Rose composed with his 6-year-old-son Cohen, Rose and Wonderbound created a unique and grimly entertaining experience, an almost natural extension of the Widow’s Bane aesthetic. Sort of — forgive us — a macabaret.

Most of us have never scored a ballet, we’re not shy about admitting this. We asked how much creative octane the project extracted from Rose.

“All that I had. It was intense.” And yeah, think about it. You compose a record, and record it when you’re ready. Something like a ballet has to be written, choreographed, probably re-written, rehearsed and finished by a date someone set months before. Hard stop.

But Rose insists another is in the works, set around GasPops material. Asking why a creator creates is a bit trivial, but doing this, again? Rose explained:

“During the time we were finishing writing the ballet and we were in pre-production, and I was stressing out, we went to the county fair, in Longmont. My son wanted to go on this crazy ride, The Spider. You get in these little buckets, and the buckets spin around and you fly up in the air. It’s nuts.

“So we get in there, he’s barely big enough to ride the thing, he’s slidin’ around, I’m trying to hold him in with one arm, we’re both screaming bloody murder, it was terrifying. And we get off the ride, and he goes, ‘Let’s do that again!’

“And I say, ‘Why would you want to do that again, it was so scary?’ And he goes, ‘Because I like to do things that scare me until they don’t scare me anymore. Then they’re fun.’

“So, I’m applying his philosophy to writing ballets.”

But in between, GasPops has a year coming up. Tours through California and the Midwest, another gig in Belize in January (not scary), and local dates as well, including a Gothic date in February. The band just released a new single, a haunting and grimly poised meditation on regret and damaged faith called “Broken,” which debuted on KBCO recently. With more new material to come, road work, another ballet and two kids at home, does he ever feel like he’s being chased by his own commitments?

“Constantly. But at the same time, the only way I can function in this reality is to relinquish responsibility, completely. I do what I can, y’know. Operating under the belief that my responsibility is only in the effort, not in the outcome. I have to restrain myself from putting qualitative values on products, and I have to relinquish control over making people happy.

“These days, more than ever, the band is really helping to shape the songs. So I’ll write the song, bring it into the studio, and then it’s kind of  a think tank. …We’ll try it one way, then change the dynamic and try it another way, and we’ll talk it over. So I kind of feel like I’m giving the process more time. … I’m letting songs percolate a lot longer than I used to.” As for the New Year’s Eve gig, we asked if the sinister Governor Leech was likely to make an appearance.

“Uh, no. The Governor will most likely be shitfaced drunk in some whorehouse on East Colfax.”

We should all be so lucky.