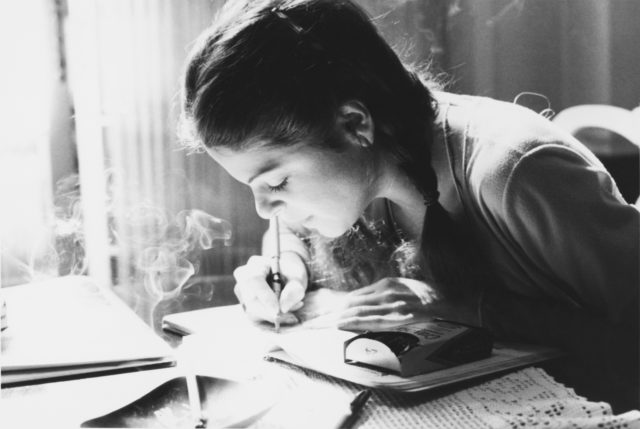 There seems to be an endless fascination with the famed Saturday Night Live. While the merits of the weekly television show are continually debated online and during office lunch breaks, documentaries about the show’s glory years continue to pop up on the festival circuit and play at art-house cinemas to large crowds eager to revisit the past and further debates on the merits of comedy, parody and satire in a republic many see as entering the terminal stage. National Lampoon: Drunk Stoned Brilliant Dead spends a good deal of its running time on the moment when the class clowns hit the big time, James Franco’s Saturday Night gives a behind-the-scenes look at the process of making one show, while Live From New York! takes a sweeping look at the show’s cultural impact.

Now, we have Love, Gilda, an intimate portrait of one comedian through her public appearances, private writings and audio recordings.

Though most know Gilda Radner from her many SNL characters — particularly Roseanne Roseannadanna — Love, Gilda attempts to understand the motivations behind Radner by correlating the opinions of those she touched and the material she left behind. It gives the movie a Rashomon-like quality: You have a sense of who Radner was but the why is a little foggier.

The writings come via Radner’s diaries, journals and scrapbook clippings. Most of the text is presented on screen for viewers to see Radner’s handwriting but a few sections are read by comedians who followed in her footsteps: Amy Poehler and Bill Hader (both SNL alums) and Melissa McCarthy. Director Lisa D’Apolito also peppers archival audio from Radner throughout the doc, letting her voice be the connective tissue that tries to tie it all together. The approach is far from a failure, but it isn’t entirely successful either.

Missing most from Love, Gilda is Radner herself, who died at the age of 42 in 1989 from ovarian cancer. Also missing are Radner’s husband, Gene Wilder — who died in 2016 from complications from Alzheimer’s disease — and John Belushi, a close friend of Radner’s and what many in the documentary describe as a big brother/father figure to Radner; he died in 1982 from a deadly cocktail of heroin and cocaine.

Much could have been gained from their insights and reflections, but it was not to be. Instead, we are left to fill in the blanks with reflections on Radner’s comic origins, her eating disorder, her approach to femininity, her views on comedy and her battle with cancer from old friends: Chevy Chase, looking crazier than usual; Martin Short, an old flame, giving the most thought-provoking insights; and SNL producer, Lorne Michaels.

Cobbled together, Love, Gilda is a decent portrait of an outstandingly funny performer.

“Wow, she had a lot on her plate,” you might say to your friend as you exit the theater.

“And talk about funny!” your friend responds.