One of the great joys of going to a big music festival is finding new music. Denver’s Grandoozy festival is offering more than 50 musical acts, from arena-filling stars such as Kendrick Lamar, Florence and the Machine, and Stevie Wonder, to up-and-coming outfits like psychedelic rockers Post Animal and avant-garde electropop songwriters like Kelela. With Grandoozy upon us, we humbly offer this, a short guide on a few of the lesser-known artists we think you ought to catch, divided as best we can by genre.

So yes, get out there and let Kendrick, Florence, Stevie, Miguel and Sturgill Simpson rock your world, but this is a buffet, children — try a little of everything.

Click here to listen to the playlist on Spotify.

A psychedelic soul outfit from Austin, Texas, Black Pumas is a band you want to introduce your friends to now so you can remind them later how amazing your taste in music is. Loaded with fat grooves and psychedelic breakbeats, Black Puma channels the sex of Al Green and the kaleidoscopic insanity of Funkadelic. They are joining St. Paul and the Broken Bones on some tour dates this fall. Listen to: “Black Moon Rising”

Continuing the super sexy vibe on our list is Daniel Caesar, a Canadian-born rapper/crooner/songwriter and international ambassador of sex. Caesar’s buttery vocals draped over drowsy, ambient beats on the track “Get You” earned him Grammy nominations in the Best R&B Album and Best R&B Performance categories. Listen to: “Get You (featuring Kali Uchis)”

Don’t confuse bilingual rapper Claudia Feliciano’s stage name, Snow Tha Product, for a drug reference; Snow is a nod to her favorite Disney character, Snow White, and “the product” reflects her desire to separate her personal and professional lives. Snow mixes tough rhymes with bouncy, melodic hooks, and is perhaps best known for her work on The Hamilton Mixtape track “Immigrants (We Get The Job Done).” Listen to: “Waste of Time”

If rock is dead, no one told L.A. noise pop band Cherry Glazerr. The band has seen a few lineup changes since forming in 2012, but they’ve continued to make scruffy garage punk under the guidance of lead singer Clementine Creevy. The song “Teenage Girl” effortlessly combines the sweetness of 1950’s girl-group pop with the ethereal psychedelia of shoegaze, while tracks like “Juicy Socks” and “Moon Dust” offer delicious punk hooks reminiscent of Bikini Kill. Listen to: “Had Ten Dollaz”

Conner Birch has called “psych rock” a “canopying term,” so we’ll avoid calling his band, the Denver-based Flaural, psych rock. Heavy on the synthesizers and driven by reverb-crunchy guitar riffs, Flaural offers expansive, swirling, colorful songs that tap into shoegaze, new wave and pop of yesterday and today. They are at once contemporary and retro. Listen to: “Hungry Lung”

Listen to “Ralphie” by Post Animal, and you’ll think those opening guitar licks were sampled right off the Yes album. The vocals take that ’70s rock vibe right on home, channeling the mellow tones of Keith Emmerson. If you enjoy Tame Impala, this Chicago outfit will float your boat. Listen to: “When I Get Home”

In April, The New Yorker called Jon Hopkins’ ambient brand of electronica a “soundtrack for a spiritual awakening.” He’s a composer and musician who’s been nominated for an Ivor Novello Award and the Mercury Prize. He’s collaborated with Brian Eno and Herbie Hancock. His DJ set at Grandoozy promises to be the stuff of electro dreams. Listen to: “Candles” and  “Open Eye Signal”

While Leon Vynehall’s newest album, Nothing is Still, is quietly atmospheric, his DJ sets offer something to shake your ass to. Vynehall releases from Ninja Tune, the record label that houses famed producers Amon Tobin, Kid Koala and Bonobo, as well as jazz saxophonist Kamasi Washington. Vynehall likewise deals in jazzy, trip-hop vibes. Listen to Vynehall’s Boiler Room DJ set for an idea of how he’ll work the floor at Grandoozy. Listen to: “It’s Just (House of Dupree)”

New York DJ Eli Escobar deals in disco-tinged soul and funk. Escobar has deep knowledge of house and disco, playing parties and clubs around New York for years before releasing his incredibly accessible, sweaty, funky debut LP, Up All Night. “New York can make you feel so high,” a voice tells us on Escobar’s bouncy track “N.Y. So Hi.” Escobar’s music does the same thing. Listen to: “N.Y. So Hi.”

At 20 years old, Jade Bird sings about love and heartbreak in that beautifully raw way that young folks do — like it’s the first time, and nothing has ever hurt like this before, because nothing has. Often armed with little more than her guitar and a disarmingly powerful yet delicate voice, Bird lives up to her name, soaring above the crowded arena of country-tinged singer/songwriters. Listen to: “Uh Huh”

Homegrown band alert: The Drunken Hearts got their start playing shows at The Mountain Sun chain of pubs after striking up a friendship with owner Kevin Daly, a Boulderite long invested in fostering up-and-coming local musicians. The Drunken Hearts evolved from an acoustic trio into an electric five-piece with spirited vocals, with lead singer Andrew McConathy delivering universal stories about love, life and the pursuit of happiness. Listen to: “Don’t Go”

• Head for the Hills

Sure, Head for the Hills is bluegrass, but they incorporate elements of indie rock, jazz, world music and even hip-hop into their post-modern sound. Their newest album, Potions and Poisons, is a delightfully dark look at humanity, at the appealing and appalling things that make us vulnerable and strong. Listen to: “Afraid of the Dark”

Kelela’s debut album, Take Me Apart, tells the story of a doomed relationship in reverse chronological order. She spent four years working on the album, meticulously blending R&B grooves with futuristic slink — Janet Jackson meets Bjork. Kelela (full name Kelela Mizanekristos) has said that her identity as a second-generational Ethiopian-American informed the album’s sound and how she chose to “articulate my vulnerability and strength.” With Take Me Apart, it would seem Kelela’s strength is her vulnerability. Listen to: “Frontline”

London-born Sarah Grace McLaughlin moved to Tokyo with her Scottish parents when she was four, and was soon performing in the city’s notoriously vibrant karaoke scene. She said she knew quickly that she wanted to be a professional performer. Today, under the moniker Bishop Briggs (her parents were from Bishopbriggs, Scotland), she’s living the dream, belting out powerful soul songs like “River.” Listen to: “The Way I Do”

There’s deep pleasure in watching Roger Sellers, aka Bayonne, move between sequencers, keyboards, pedals and percussion instruments to build a song; that much energy and sound emanating from one person is captivating. Rolling Stone named him one of its 10 Artists You Need To Know in February 2016. It’s 2018: Get with the program. Listen to: “Appeals”

Blast off with coordinates set to Karl Denson’s Tiny Universe; chances are you’ll never want to come home. Down and dirty, swirling, progressive funk is what Denson and his band deal in, so come prepared to get down. As a saxophonist, flutist and powerful vocalist, Denson has headed his own projects (The Greyboy Allstars, Karl Denson Trio) and also toured with The Rolling Stones and Lenny Kravitz. Listen to: “Seven Nation Army”

The Soul Rebels are everywhere right now: They just did a Tiny Desk concert for NPR and debuted on late night TV on The Late Show with Stephen Colbert. They’ve taken their brand of New Orleans brass across genres, collaborating with Nas, Pretty Lights, Lauryn Hill, Metallica and Marilyn Manson, just to name a few artists. Listen to: “Drinka Little Poison (4 U Die)”

Mavis isn’t a lesser known artist — this woman’s been in the music game for more than 60 years, first as the lead singer of The Staple Singers, then as a solo artist. In every word she delivers in her rich, gravelly contralto voice is the story of a black woman who has survived in a world that told her she had no right. She’s said Bob Dylan proposed to her once, and we can’t blame the guy for trying. Listen to: “Ain’t No Doubt About It (featuring Jeff Tweedy)” 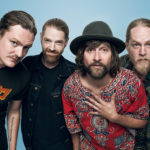 Hometown band alert: Dragondeer serve up piping hot slices of Mississippi Delta blues with a steaming side of psychedelic rock. The band recorded their latest album, If You Got The Blues, in California’s famed Topanga Canyon with producer Mark Howard, who’s worked with Willie Nelson, Neil Young, Tom Waits, Bob Dylan and Lucinda Williams. Listen to: “Don’t That Feel Good”

It seems right that we close out this list with Andy Frasco & The U.N., a party band if there ever was one. Guitarist Shawn Eckels and saxophonist Ernie Change have anchored this revolving group of players over the years, helping to cook up a stew of soul, blues, jazz and rock. Listen to: “Smoking Dope n Rock n Roll”