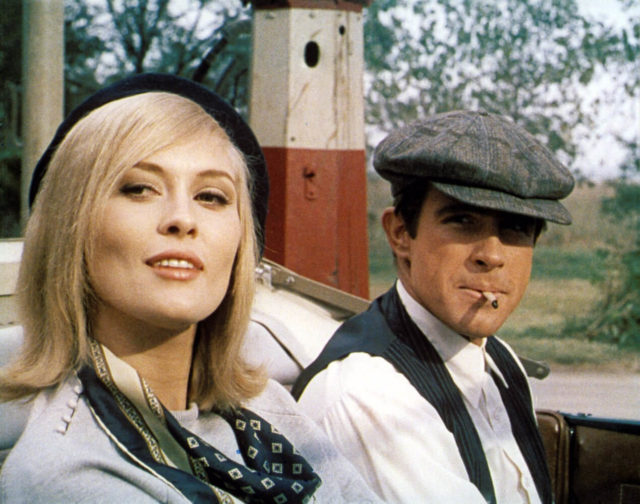 It starts with a woman, naked and alone. She primps herself in the mirror, bangs on the brass bars of her bedpost in frustration and paces the shabby room like a caged animal. What does she want? Sex, of course. She hears a commotion outside. What luck, she thinks as she looks outside and sees a handsome young man trying to steal her mother’s car. In true Shakespearean fashion, she addresses him from the window. He charms her, she runs downstairs and into his life. She doesn’t get sex (he’s impotent) but she does get the next best thing: a life of crime.

The year is 1933, and in Dallas, Texas, Bonnie Parker is three decades ahead of her time. She is played by Faye Dunaway and with her straight blond bob and costumes from Theadora Van Runkle, she is both perfectly period and inherently ’60s. Just look at the way she poses for a picture: silk blouse, black beret, pistol in hand and a cigar hanging out of her mouth. Her partner-in-crime, Clyde Barrow (Warren Beatty, a man too handsome for his own good), may think he’s in charge, but anyone watching knows who is pulling the strings.

Released on Aug. 13, 1967, Bonnie and Clyde is a milestone in cinema history; a revolution in pictures with one foot planted firmly in 1930s gangster pictures and the other in the 1960s counter-culture.

Directed by Arthur Penn, Bonnie and Clyde has a tone that constantly switches between comedic and tragic, childish fun and grave consequences. Watch how Parker barely stifles a smile when she tells C.W. Moss (Michael Pollard), “I’m Miss Bonnie Parker, and this here is Mr. Clyde Barrow, and we rob banks.”

But just a few minutes later, fun and games turn deadly when Barrow shoots and kills a banker. Historically speaking, this was the first time a Hollywood audience ever saw a gun fired and its deadly outcome in the same frame. For decades, the Production Code demanded every gun fired and every consequence rendered be separated by a cut. Not here. Here, we see exactly what happens when you fire a gun at a man’s face. And when the camera cuts back to Barrow, we don’t see a look of joy or heroics, we see doom. A blood debt has been cast and anyone who’s seen the end knows it will be paid in full, 130-fold.

That ending. That magnificent, horrific, jaw-dropping ending. Using multiple cameras — rolling at various speeds of slow motion — Penn captured the bloody and violent end of Bonnie and Clyde at the hand of Texas Ranger Frank Hamer (Denver Pyle) and his posse. Cut to the staccato rat-a-tat-tat of gunshots, Bonnie and Clyde’s bodies jerk violently as a hail of bullets riddle them into a demented dance of death. It’s one of the most famous scenes in all of cinema, one that proves Bonnie and Clyde wasn’t just a cool, stylish picture of beautiful kids posing. This ending announced a new way of making movies and a new way of seeing them. The year was 1967 and the revolution couldn’t be dismissed.