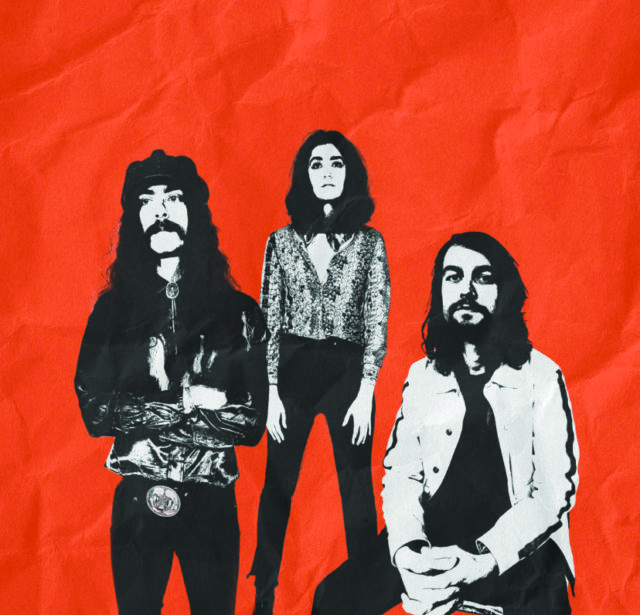 For all its energy and immediacy, Pink Fuzz’s 2021 release Live at Silo Sound is the product of more than a decade of hard work by the Boulder-born hard-rock outfit.

After meeting as students at Foothills Elementary and forming a band as teenagers, Pink Fuzz has cut its teeth in the Colorado music scene, releasing one searing full-length studio album, along with Live at Silo Sound. The trio now looks poised to explode onto the national scene, like one of Kerouac’s “fabulous roman candles exploding across the stars.”

Charismatic bassist and singer LuLu Demitro explained by phone recently that the seamless musical eruption of Live at Silo Sound is the result of she and her brother, John, putting in countless hours—along with phenom drummer Forrest Raup—at the height of the pandemic.

“We had been practicing so much,” she explains. “We had been writing and practicing all the time. We were feeling really tight. I think it’s a great representation of us live, especially because you can hear everything. We were able to mix it how we’d like people to hear us when we’re playing live.

“A lot of our fans have said, ‘We’re so happy we can hear the lyrics.’ That’s been really nice for us. John and I have really pretty voices when we sing together. I think they’re really beautiful, and it lends itself well to our music live when you can hear it. If you can’t, you’re losing that aspect of what our band is.”

The trio, which has been touring since the Demitros were teenagers, recently released a remarkable acoustic living-room performance along with Fading Away, a two-song EP of surprisingly mellow, heartfelt tunes driven by acoustic guitar.

“Sometimes we’ll jam on a song in a different tempo, just to change things up and see what it’s like, and that was a song we had done that to many times,” Demitro says. “We had a friend pass away last year, unexpectedly—a childhood friend named Jake. ‘Turn’ was his favorite song of ours, so John reworked the lyrics and we took the acoustic version, because it felt better for what the situation was. It felt really good to record it. We all grew up together, and I know it was really emotional and hard for John to do, and I think that you can hear that it’s got a lot of heart in it.

“It was definitely a more emotional work for all of us,” she continues. “It felt like the right move to take it in that direction, because we all like that kind of music. We don’t want people to think we’re just loud and fast all the time. We’ve got a little more depth than that.”

Pink Fuzz is definitely associated with the Motörhead double-whammy of fast and loud, but unlike some of the bands that inspired the Demitros, their music is anything but loose—especially with all-star drummer Raup behind them. The recent mellow, tasteful acoustic releases certainly reveal the band’s range and depth, but Live at Silo reveals a mature, polished group that almost sounds like its members sold their souls to the devil at the crossroads in the years since it was an underage baby-faced crew jamming at now-defunct Boulder pubs like the No Name Bar and the Lazy Dog.

“A lot of the reason that we practice so hard is that we’re constantly trying to bridge the gap of what you want to make and what you are making,” Demitro says. “For us, it feels like the more we practice the closer we get to exactly what we want to make, and I think that’s true of our newer material. It’s getting so much closer to everything that we want to make.”

Incessant practice, in reality, is what catapulted Pink Fuzz forward musically, as well as the rampant touring it was known for before the pandemic. Demitro says that getting back on the road has lit a fire under the trio again as well.

“Our first jaunt back out was over the summer,” she beams. “We played a motorcycle festival called Bat City Tire Fire down in Austin, in the middle of July. That was our first time out and it felt pretty good. We were outside, and it was really fun. We played that and a couple other dates around it. I remember it being, like, ‘Whoa, how crazy,’ because there were so many people out. It was kind of overwhelming just from coming out of COVID, seeing how many people were out, but also just, ‘Wow. Everybody really wants to see music now.’ It kind of really gave us a confidence boost that people were ready to rock.”

John, one year older than LuLu and thus lovingly referred to as an “Irish twin,” shares front-person duties with his sister in Pink Fuzz, which she estimates has performed in 30 states. John’s iconic braids and black motorcycle cap have made him instantly recognizable when he’s out and about in the Colorado music scene, or just working on his car on a sunny Boulder day, but it’s his rapidly increasing guitar skills that are really making him recognizable these days.

“Yeah, it’s incredible; it’s so cool,” LuLu responds when I ask what it’s like seeing her brother leap forward from riffing to shredding on guitar, as if he found a power-up in a video game.

“Sometimes we’re on stage and I’ll look over at John and I can’t help but smile at him so big. I’m just, like, ‘You’re so cool.’ It’s incredible. And John taught me how to play bass. He’s an unbelievable bass player, too. It’s so cool seeing him become the guitarist he is, the voicing through his solos and the way he writes now. It’s unique to him, and that’s a huge achievement. He’s getting into this crazy zone. He’s got something special, but John practices every day for hours a day, and he doesn’t let up with that. That is 100% why he is crazy good.”

The three members of Pink Fuzz have been playing together for nearly a decade, even though they’re all still twenty-somethings. They have day jobs in addition to their passionate practicing and touring, but are “all, in some capacity or another, connected to music,”Demitro says, either teaching music or working as session musicians.

Pink Fuzz has taken giant steps musically, developing a career on the road with a fiercely DIY, independent ethos. Demitro says that could change soon, but the group is being very careful, because handing the proverbial wheel to the wrong people could result in Pink Fuzz being driven in the wrong direction, or even in a ditch.

“That’s something we’ve been really cautious of,” she stresses, “because we’ve been doing this ourselves for so long, and it’s really scary to give up control. We’ve talked to people in the past about what building our team would look like, and you really want to choose the right people that obviously have your best interest at heart, but also share the vision of what you see yourself doing. I think that, for us, we’re trying to stay true to the things we believe in and how we want to put our art out into the world.”

“I think we’re looking for a hybrid of us keeping our hands on the wheel and not just relinquishing all control to some conglomerate with some big idea of what they want us to do,” she concludes. “We have a pretty strong vision for what we want our career to be and where we see our future going.”

Live at Silo Sound presents one hell of a strong vision for Pink Fuzz’s future.