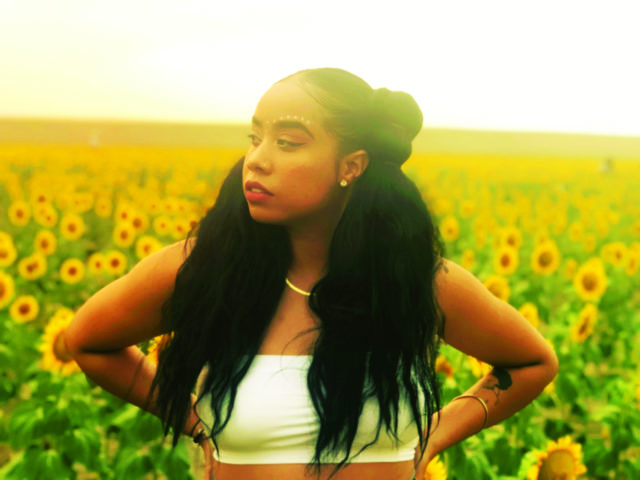 “How come I gotta forgive and forget / Walking ‘round like you ain’t done no silly shit?” Britney Jane asks in her new single, “Blossom,” a relaxed and self-assured farewell to a toxic relationship. The Denver-based soul and R&B singer has provided backup vocals for a bevy of the city’s up-and-coming acts — Kayla Marque, Kid Astronaut, Lee Clark Allen, and Haitian-American low-fi hip-hop artist Donny Blot, who’s featured on “Blossom” — but now she’s gearing up to step out on her own with a forthcoming four-track EP called In My Feelings.

“Being a black woman I feel like there’s a lack of respect for black women and even just women in general,” Britney Jane said in a press release about “Blossom.” “I want everyone to be able to connect to my music — not just black women or black trans women — but all communities.” True to her word, Britney Jane has created a versatile empowerment anthem with “Blossom,” a mantra to chant in any situation that makes you question your self-worth: “It is what it is / Can be what it can be / All I can start to do is start loving me.”

“Stronger Than I Once Was,” Zach Heckendorf

At 26 years old, Denver-native Zach Heckendorf has opened for Lana Del Rey, The Infamous Stringdusters, Rodrigo y Gabriela, Nathaniel Rateliff & The Night Sweats, Ozomatli, ZZ Ward and Michael Franti. The young guitarist — back in Denver after a four-year stint in the Big Apple — has a knack for crafting the kind of acoustic-based indie pop ear worms that burrow deep down in your temporal lobes for days, evidenced by the anthemic pep talk of his new single, “Stronger Than I Once Was.” “[The song] is a fable of sorts, a fictionalization of my personal journey,” Heckendorf told music blog Ones To Watch. “It’s about moving from a place of weakness to a place of strength and believing that you have the power to get there. Above all, it’s about using that personal strength of ours to better serve humanity. It reflects my belief that we have the potential to move ourselves, individually and collectively, to a higher state of being.”

The story behind Thunder Jackson is a readymade biopic: A small-town Oklahoma native found himself broke and aimless in Los Angeles at 19 years old, but a chance encounter in a cab on Hollywood Boulevard one night changed all of that. The teenager was, unknowingly, riding around with Pete Lawrie-Winfield, the lead singer of British band Until the Ribbon Breaks. When Lawrie-Winfield heard the Okie in the backseat soulfully singing along to a Jeff Bucklery tune on the radio, he knew he’d found raw talent. The two teamed up to form Thunder Jackson, producing the understated pop bop “Guilty Party,” which has racked up more than 3 million streams on Spotify since its debut in 2017. But the duo has remained fairly tight-lipped about their individual personalities, preferring to let the music speak for itself. Now, Thunder Jackson is back with “Institution,” the lead single off the mysterious duo’s debut forthcoming LP, due on Oct. 1. With slick beats that harken back to the synth-wave of the ’80s, “Institution” details a struggle with mental health: “Maybe it’s emotional / Maybe it’s chemical / Maybe it’s a symptom of an ordinary life / Maybe it’s my family tree — haunted / I just need another one to make it through the night / Put me in an institution / I think I may have lost my mind.”

Denver artist Joel Ansett will be performing a live set from Boulder’s Stone Cottage Studios on Thursday, Sept. 10 at 7 p.m. The event will be a live streaming production, featuring 1080P video and audio for the highest quality viewing experience. Ansett’s music effortlessly blends folk and R&B sounds into soul-soothing creations all his own. During the livestream, Ansett plans to debut new music and tease fans with sneak peeks from an upcoming EP. “The EP is all coming from realizing I don’t know how to rest, and the pandemic obviously amplified that realization because there I was with extra time but I actually didn’t have the skill or know how to really wind down,” Ansett said in a press release. Tiered ticketing provides options to attend a virtual Q&A with Ansett after the show, digital and physical copies of Ansett’s most recent album, as well as a “download only” recording of the livestream for those who can’t make the show.

The Boulder Symphony presents the Takács Quartet for the Grammy-winning quartet’s first live performance of the season with their new violist, Richard O’Neil. Takács will give a one-hour performance at the Jewish Community Center lawn with “COVID pods” to keep audience members safe at 8 feet apart. Each “pod” can hold up to four patrons. To make the seating as easy as possible, patrons must book their tickets together. There will also be a limited number of “balcony” car spots for patrons who prefer to stay in their cars with great views of the stage and will have optional FM transmission of the concert.

Eric Golden, the Colorado Country Music Hall of Fame’s 2019 New Artist of the Year, is a Denver native singer/guitarist with music in his blood. As the son of a musician, Golden grew up around live music. His performances are deeply influenced by the classic Bakersfield honky tonk scene, so you’re sure to hear Golden cover multiple decades of classic country music.