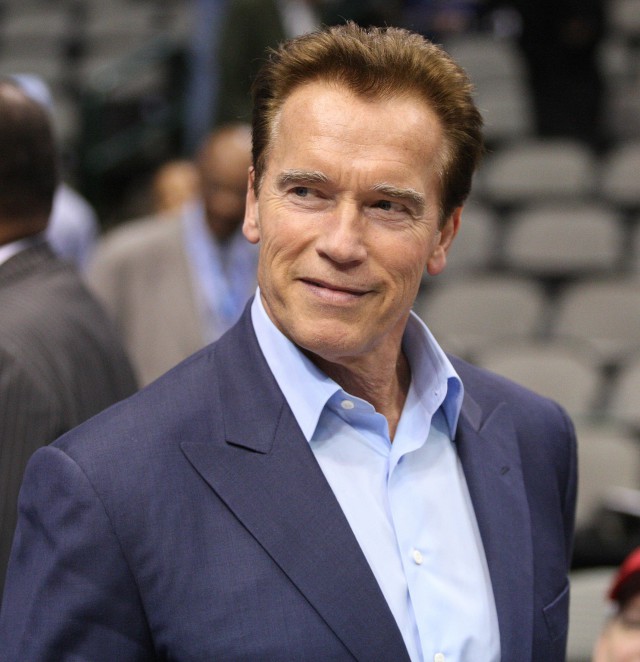 — In the recently released trailer for “The Expendables,” the action movie directed by about a group of aging mercenaries on a rebel mission in , big-screen graybeards such Stallone, , and (along with the more youthful and ) are plotting a coup when an unexpected face suddenly materializes.

, apparently taking a break from
the budgetary troubles that have dogged him during his governorship,
appears on screen with Willis and Stallone, utters a crisply satirical
line (“Give this job to my friend here — he loves playing in the
jungle,” he says about the “Rambo” star) and, as quickly as he
appeared, turns and walks away.

As governor prepares to beat a retreat from
at the end of the year, the scene dangles a tantalizing possibility.
Forget low approval ratings, tax hikes and an education crisis — fans
and entertainment-business insiders are asking more pressing questions.
Is the appearance in the release “The
Expendables” — a testosterone-drenched shoot-em-up summer movie, if
testosterone-drenched shoot-em-up summer movies were cast in
action-film retirement homes — an acting swan song before
Schwarzenegger stalks off to a new political adventure (a post in the
Obama administration, perhaps)? Or is it a trial balloon for another
foray into ?

Since landing in the governor’s office nearly 6 1/2
years ago, Schwarzenegger has taken on a task that can seem as
mercenary as any in “The Expendables.” In fact, after all the political
powder kegs, legislative trench warfare and spray-and-pray news
coverage, he may have wished they’d given this job to his friend. (Or
his enemy.)

But Schwarzenegger is unlikely to let his work in
the Capitol serve as our lasting impression of him. “When politicians
leave office, they almost always try to re-ingratiate themselves with
the public they’ve inevitably disappointed,” says pundit and Time
magazine columnist , a frequent chronicler of the politics-celebrity nexus.

In Schwarzenegger’s case, that could mean a humanitarian role a la the one inhabited by former President . Or it could mean an actual movie role.

Schwarzenegger, after all, has shown a remarkable
capacity for reinvention over his more than three decades in the public
eye. The Austrian immigrant made the unusual transition from
bodybuilder to B-movie star before ascending to the A-list, then recast
himself as a comedic actor, before finally making the leap from
dominating the multiplex to running the biggest state in the union.
Along the way, he’s incorporated parts of his earlier self; as
governor, he’s put his show business experience to use by relying on
catchy sound bites right out of a studio marketer’s playbook.

Since America loves a comeback, what would be a
better move, for a man famous for promising he’ll be back, than a
return to the big screen, especially as he’s been edged further out of
a Tea Party-minded Republican mainstream? As Klein puts it: “Acting
would be a way for Schwarzenegger to restore himself in the eyes of the
public.”

For years, celebrities who crossed from entertainment into politics (, )
didn’t boomerang back to their former profession. And politicians who
leave elected office to dabble in television celebrity are often just
holding their place until they can return to the public sector (the
Sarah Palin way, if she indeed returns).

More recently, however, entertainers who made the jump to politics leaped back when their political run ended. (Schwarzenegger’s costar in “Predator,” “The Running Man” and “Batman & Robin”) left the
governor’s mansion to become a radio personality and indie-film actor.
After an ill-fated presidential run in 2008, former Sen. returned to TV and movies and launched a radio career.

A radio career may be a stretch for Schwarzenegger,
who has been mum on his post-gubernatorial life. (He declined to be
interviewed for this piece and declines to talk about the subject
generally — possibly because, as some in his inner circle say, he
doesn’t know his plans.) But those who’ve gone from politics back to
acting say it can be rewarding.

“Leaving politics and getting back into the business
is kind of liberating,” Thompson says. “You’re used to dealing with a
lot of people on your staff, and then you get to a situation where
you’re on your own and it’s your own deal. And at the end of the day
you can go home and forget about work until the next day.”

With that in mind, we scoured some of the brightest
minds inside and outside the entertainment business and beyond to
determine the options for an Arnold re-entry into , how it could be executed and how it would be received. We offer six possibilities:

—A starring role in a big action movie

The most tempting option. It takes Schwarzenegger
back to his roots and takes us back to how we best remember him. In the
1980s, when guns, biceps and cheesy one-liners were bursting off the
screen, no one burst bigger than Schwarzenegger, who in a remarkable
five-year stretch starred in eight action movies. “In today’s world we
need heroes, which means we need Arnold,” , a film producer and brother of ’80s action star ,
says (before adding that we also need his brother). “Who are the kids
quoting? It’s Chuck and Arnold. We need to bring them back. Our action
movies have gotten too artsy.”

But it may be more than machismo-fueled nostalgia that gets Arnold strapping on the AK-47 again. Several A-list
producers point out that he’s one of the most recognizable stars in the
world, and action remains one of the most reliable genres overseas.
Plus he’s a lot more on our minds now than he was before he took office.

The elephant in the room? Action heroes generally
don’t fly with audiences after they hit their 50s. (Schwarzenegger will
turn 63 this summer.) And for all the curiosity that a return to tank
tops and bullet belts would bring, Schwarzenegger may not bring crowds
into movie theaters. Apart from the third “Terminator” in 2003, he
hasn’t had an action hit since 1994’s “True Lies” — despite half a
dozen attempts that included clunkers “Collateral Damage” and “The 6th
Day.” And that’s to say nothing of whether he can still go shirtless;
“Twilight’s” , after all, has upped the six-pack ante.

—A starring role in a smaller action movie

The biggest problem with Schwarzenegger starring in a franchise action picture is that few financiers would be willing to spend making a movie with a risky quantity at the center. Budget that movie more modestly, however, and you could be in business.

“Until there’s a young crop of actors that can fill
the gap left by the testosterone brigade, there’s going to be a lot of
interest (from financiers) for movies from Stallone and
Schwarzenegger,” says of IM Global. “But they wouldn’t buy it at a budget. At (million) or , on the other hand, they’d take a bit of a gamble.”

Stallone is the model: He made 2008’s “Rambo” and
“Expendables” at midrange budgets outside the mainstream studio system.
(Stallone also declined to comment for this piece.) But Ford cautions
that the role Schwarzenegger takes would still need to build in plenty
of self-knowing irony. And to get a buzz among younger audiences, he
warns, “it would probably still need to be a good movie.”

—A supporting role in a big action film

If it’s tricky for Schwarzenegger to carry a movie,
he could pair himself with a younger actor, someone who could bring in
a youthful crowd and also handle the jumping-off-the-building stuff
(think the coupling of and in “Indiana Jones and the Kingdom of the Crystal Skull”).

“I’d be hesitant to cast him as the lead,” says Mike Medavoy, the veteran
producer and studio executive who oversaw the release of monster
Schwarzenegger hits such as “The Terminator.” “But if you get a
terrific director and a young star and put them together, I think the
combination would work.”

—A role on reality television

It sounds funny, but there’s a precedent for
politicians doing reality TV. Especially Republicans with shaky
political futures (see “Dancing” star ).
Besides, if you’re going to launch your political career on late-night,
as Schwarzenegger did, what better way to give your post-political
career a jolt than with an appearance in prime time?

“The characteristics that make a politician connect
in terms of charisma are the exact same characteristics that help you
connect to a reality-television audience,” says ,
the veteran producer behind reality shows such as “Don’t Forget the
Lyrics” and “Shaq’s Big Challenge.” “‘Dancing With the Stars’ would be
a great platform since it’s high-profile and quick,” Coelen adds. “But
I wouldn’t be closed to building a series around him. Schwarzenegger
can do an upbeat brand-building show after he leaves office and it
would be a huge ratings draw. And there would be no tarnish for him.”

OK, so “Junior” wasn’t a high-water mark in modern film history. But with the trio of comedies Schwarzenegger made with (“Twins” and “Kindergarten Cop” were the others), he has proven appeal
in the fish-out-of-water comedy. And in office he’s shown a flair for
the deadpan.

“I don’t see him playing an arrogant action hero,”
Klein says. “But I can see him coming back in a self-deprecating role.”
Or as Thompson says, “I think the public is much more tolerant these
days of seeing different sides of public figures.”

—A role in a drama

It’s been a long time since Schwarzenegger has done
something more character-driven or worked with a top-flight auteur. So
long, in fact, that was in the White House when he last tried it.

But the guy began his acting career in a noir (“The Long Goodbye”) and a film (“Stay Hungry,” for which Schwarzenegger won his only major award, a Golden Globe).

True, his cameos while in office would hardly pave
the way for an Oscar run (they include “The Kid & I,” “Around the
World in 80 Days” and the Oscar contender that was “Terminator
Salvation”). But there would be a neat closing-of-the-circle in any
post-gubernatorial film role: Movies helped launch his political
career, and the prominence he maintained while in office could help put
him back in movies.

And even his political detractors might have reason to buy a ticket. If he’s gainfully employed in , they might reason, maybe he won’t run for another political office.