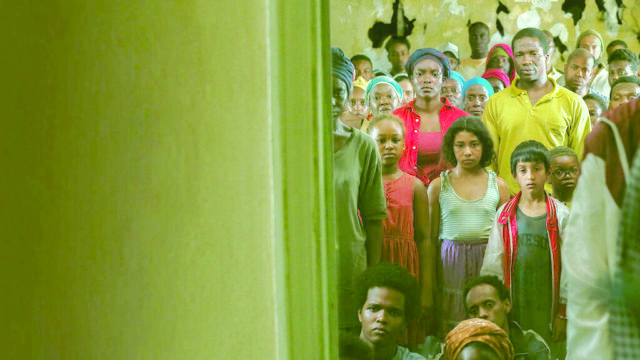 The most satisfying response to a horror movie scare is not a jump, a shriek or a recoil. It is a verbal “Nope!” It is that one-sided dialogue in which an audience member declares “Nuh-uh” in response to a scene of pure terror, as if to say, “I do not agree with you that I am seeing what I am seeing.”

Writer/director Remi Weekes’ His House is at least a quadruple “No thank you please” recipient. Without ever sinking to the depths of a single, manipulative jump scare, the relentlessly chilling film repeatedly tells you — in no uncertain terms — that something absolutely panic-inducing is about to happen. Then that thing happens. Then you say, “Absolutely not.”

The most insane thing? The fact that this film is the year’s scariest is not anywhere near its best feature.

His House operates from the underlying fundamental principle that made Get Out brilliant: It literalizes a real-world social horror. In this case, the brutality of assimilation experienced by refugees, as well as the PTSD that haunts them, is made supernaturally manifest. Bol (Sope Dirisu) and Rial Majur (Wunmi Mosaku) escaped South Sudan only to find themselves held in a lingering detention in England. Out of the blue, they are told they will be released, given a wickedly meager weekly allowance, and must reside in a demon-filled hell house or they’ll be kicked out of the country.

OK, so the bureaucrats don’t specifically say that Satan is the landlord of the decrepit manor the Majurs will be forced to live inside. But that is totally Beelzebub’s property. The first night, Bol hears things inside the walls, so he reaches his hand in there. Shockingly, things do not get better from there! His House is a Russian-nesting-doll of terrors; every layer unpacks a fresh-and-awful trauma and at least one level reveals a legitimately shocking plot point.

Working from a story by Felicity Evans, Weekes’s film inverts the grotesque attempts by certain politicians to reposition refugees as the monsters. If fleeing from genocide is too abstract to trigger some folks’ empathy toward these tortured people, chances are high that seeing a “night witch” do some icky boogey woogie to them isn’t going to awaken them from their moral coma. Still, seeing their struggle play out in hyperbolic, mythological fashion somehow legitimizes their plight.

All that said, if you want to chuck social responsibility and being a good person out the window, His House can be enjoyed as nothing more than a bangin’ haunted house jam. The cinematography by Jo Willems is often downright poetic, the acting is multiple light years beyond most performances in this genre, and it is jam-packed with so much “Nope” that you absolutely should say “Yes.”