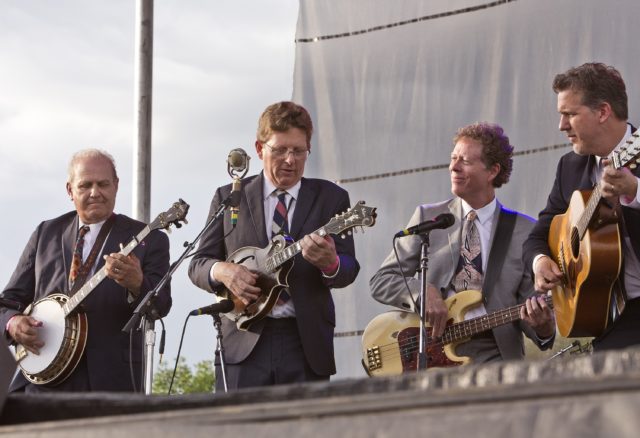 Forty years later the Boulder-based band is regarded as one of bluegrass music’s most iconic acts. To celebrate, Hot Rize performs four sold-out shows this week: Thurdsay at eTown Hall and Friday through Sunday at the Boulder Theater.

“It’s going to be a really big sound. These shows will be like Hot Rize Plus,” enthuses Tim O’Brien. The band’s lead singer noted the new, improved ingredient now touted on Martha White sacks.

Joining Hot Rize are three longtime friends and masters of their respective instruments: Sam Bush (mandolin), Jerry Douglas (resophonic guitar or Dobro) and Stuart Duncan (violin). A veteran crew from eTown will record the proceedings for an upcoming DVD. “It’s like ‘The Last Waltz’ except we’re not breaking up the band,” Wernick says.

The quartet of Wernick, songwriter and multi-instrumentalist Tim O’Brien, bassist and emcee Nick Forster and guitarist Charles Sawtelle were not welcomed warmly at the start by bluegrass fundamentalists.

“We stuck out. We were young people playing traditional music,” O’Brien says. “They said: ‘Your hair is too big.’ ‘You’ve got an electric bass.’ ‘You come from Colorado.’”

The members wore suits and wrote most of their own songs. They had a lead guitar player, uncommon for a bluegrass band, and featured a phase shifted banjo that gave songs a futuristic quality. Also a rarity: Hot Rize traveled with a sound man to have Grateful Dead-quality concert sound.

The bluegrass mold was already being broken by The Country Gentlemen, the Seldom Scene, Old and In the Way, New Grass Revival and John Hartford.

“It was a sign that bluegrass was changing and taking the music to a new place. We were part of that reform movement built on tradition,” O’Brien says.

Hot Rize has never had a star vehicle like Bill Monroe’s many Bluegrass Boys. “It’s one of those rare bands with four equal members. Everybody has an important role to play. It’s Tim’s singing, the harmonies, Nick’s emceeing and Pete’s banjo,” says Bryan Sutton, the band’s guitarist for the past 16 years.

And then there is Red Knuckles and the Trailblazers. The oddly hilarious, alter-ego honkytonk-Western Swing ensemble appears midway through virtually every Hot Rize show. Some of the finest acoustic musicians of our time dress up and cut loose with the band.

“It’s been Halloween every night and everybody always wants to sit in with the Trailblazers,” O’Brien says.

But the band takes the twang seriously. “When the music being played is high quality the comedy is better. Red Knuckles is a great honkytonk band that could play anywhere,” Sutton says.

The Front Range proved a fertile place to birth the band. “In 1978 we were part of a very vibrant musical community here. There were lots of places to play in Boulder and Denver and live music was a big part of the culture,” Nick Forster says. The Denver Folklore Center was the place that brought the members together and is still an essential music community hub.

“Hot Rize really galvanized the scene. They have been torchbearers for Colorado bluegrass. Every time I come there I witness the pride Colorado has in the band,” Sutton says.

After nine albums, 12 years of touring in the U.S., Europe and Japan, playing the Grand Ole Opry, earning a Grammy nomination and winning the first ever Entertainer of the Year Award from the International Bluegrass Music Association, Hot Rize disbanded in 1991 except for occasional reunion shows.

Niwot’s Pete Wernick formed the Flexigrass band and continued his work as an educator through bluegrass camps and his national Wernick Method classes. Tim O’Brien moved to Nashville, and the singer-songwriter has released a series of critically acclaimed folk and Americana albums and won a Grammy. Charles Sawtelle fronted his own band, The Whippets, before he died in 1999. Nick Forster founded the eTown radio show in Boulder in 1991 with his wife, Helen Forster.

On eTown, Nick Forster has collaborated with hundreds of notable musicians ranging from Joan Baez and Pete Seeger to Mavis Staples and Buddy Guy. However, Hot Rize still resonates.

“Hot Rize is deep in my bones. It’s a sound that none of us can make by ourselves. When the four of us are together it sounds like Hot Rize,” Forster says.

In 2001, Hot Rize welcomed Bryan Sutton, who grew up listening to Hot Rize tapes in his dad’s car. Recognized as Nashville’s preeminent acoustic guitarist, Sutton’s precise flatpicking brightens hundreds of studio albums. With Sutton aboard, Hot Rize has performed a limited number of shows every year and recorded a batch of new songs on 2015’s When I’m Free.

“It’s not tradition for tradition’s sake. Hot Rize honors the past but isn’t weighed down by it,” Sutton says.

Hot Rize is also aware of its own traditions. Many of the band’s songs have become part of the bluegrass repertoire. More critically, the tunes are sung around campfires every summer.

“I think Hot Rize will be remembered for the material, the songs that a lot of people are still singing and recording, songs like ‘Colleen Malone,’ ‘Nellie Kane’ and ‘Just Like You,’” Wernick says.

“Bluegrass is a treasure to me and it’s important to me that it continue to exist: It’s great to see great younger players choosing to play bluegrass,” he says.

O’Brien is optimistic about the future of the genre. “There’s some new band right now in Boulder that’s practicing and playing and doesn’t know how hard it will be. Bluegrass just keeps regenerating itself,” he says.

Sutton is still wowed by the opportunity. “I never take for granted that I get to be part of songs like ‘Nellie Kane.’ When we kick off with ‘Blue Night’ I remember hearing them play it when I saw them as a kid,” he says.

And Forster is looking ahead: “It is 40 years and I still don’t know how this is all going to turn out.”

On the Bill: Hot Rize with Red Knuckles and The Trailblazers and guests.