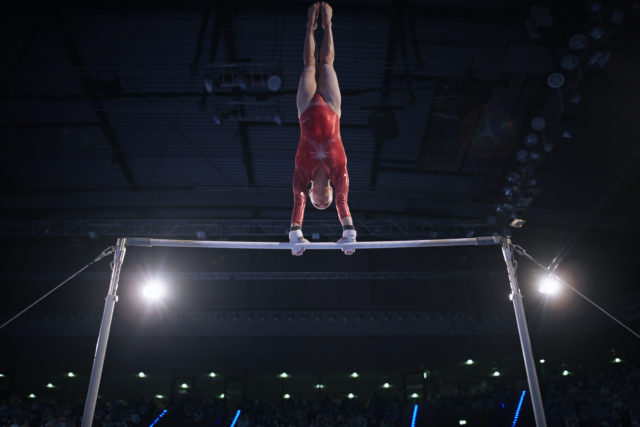 Fifteen-year-old Olga (Anastasiia Budiashkina) isn’t sure where she belongs. Her mother is a Ukrainian journalist covering the unrest and revolution building in Kyiv. The year is 2013, and things are getting testy in the streets and harder for Olga to ignore and mom to protect her. Olga’s a gymnast training for the Euro competition—the uneven bars are her métier—and she’s good. Real good. So good that it might behoove her to jump ship from the Ukrainian team for Switzerland. Olga’s father, long absent, is Swiss, which qualifies her a spot on the team, even if it means Olga must renounce her Ukrainian nationality. Ukraine doesn’t allow for dual citizenship, which is a laugh considering how cozy the Ukrainian leaders are with the Russian Federation. It’s the classic “do as I say, not as I do” on an international level.

That’s not the only irony swirling around Olga. Written by Elie Grappe and Raphaëlle Desplechin, with Grappe in the director’s chair, Olga recounts one political conflict to underline another. That Olga needs to defect from a revolutionary country to neutral Switzerland for better opportunities shouldn’t be lost on the audience, nor should the old “shut up and dribble” adage where athletes are preferred when they void themselves of politics. In one instance, a member of the Ukrainian gymnastics team—not Olga—attempts to start a revolutionary chant before being physically removed from the floor by security. The announcers apologize to the crowd for such an unpleasant scene, and the match resumes. Yes, the meet takes place in Europe, and the events of the Euromaidan are probably on the minds of everyone present. But we’ve come here for sport, they think. Let’s leave politics to the politicians.

Alas, that’s never the case. Employing a camera that follows but never leads, Grappe and cinematographer Lucie Baudinaud haunt Olga as she tries to block out the reality back home while landing her routine for the judges. And though Olga finds a happy ending—the Maidan Uprising was a success, and the movie wrapped production before the 2022 Russian invasion—it might be impossible to watch the events unfolding in Olga and not think of the war currently underway in Kyiv.

ON THE BILL: Olga opens in limited release on July 8.

Back for a fourth—and fully in-person—installment, the Boulder Environmental/Nature/Outdoors Film Festival returns to the Dairy Arts Center, July 14-17, for a “stimulating green community weekend.”

Boulder ENOFF opens with the immersive documentary River—narrated by Willem Dafoe and scored by Jonny Greenwood—and will screen an additional 10 features and eight shorts over four days. There’s lots of good stuff to see, but make time for Sara Dosa’s stunning documentary Fire of Love, about French volcanologists Katia and Maurice Krafft. Their dedication to their work is humbling. Their devotion to each other is life-affirming.

ON THE BILL: The Boulder Environmental/Nature/Outdoors Film Festival, July 14-17, all screenings at the Dairy Arts Center (Boedecker and Gordon Gamm Theaters). Passes and tickets are on sale at thedairy.org.